You are the owner of this article.
Edit Article Add New Article
You have permission to edit this article.
Edit
Home
Reveille
The Mag
KLSU
Podcasts
Tiger TV
Gumbo Yearbook
Housing Resources
Advertising
Share This
1 of 8 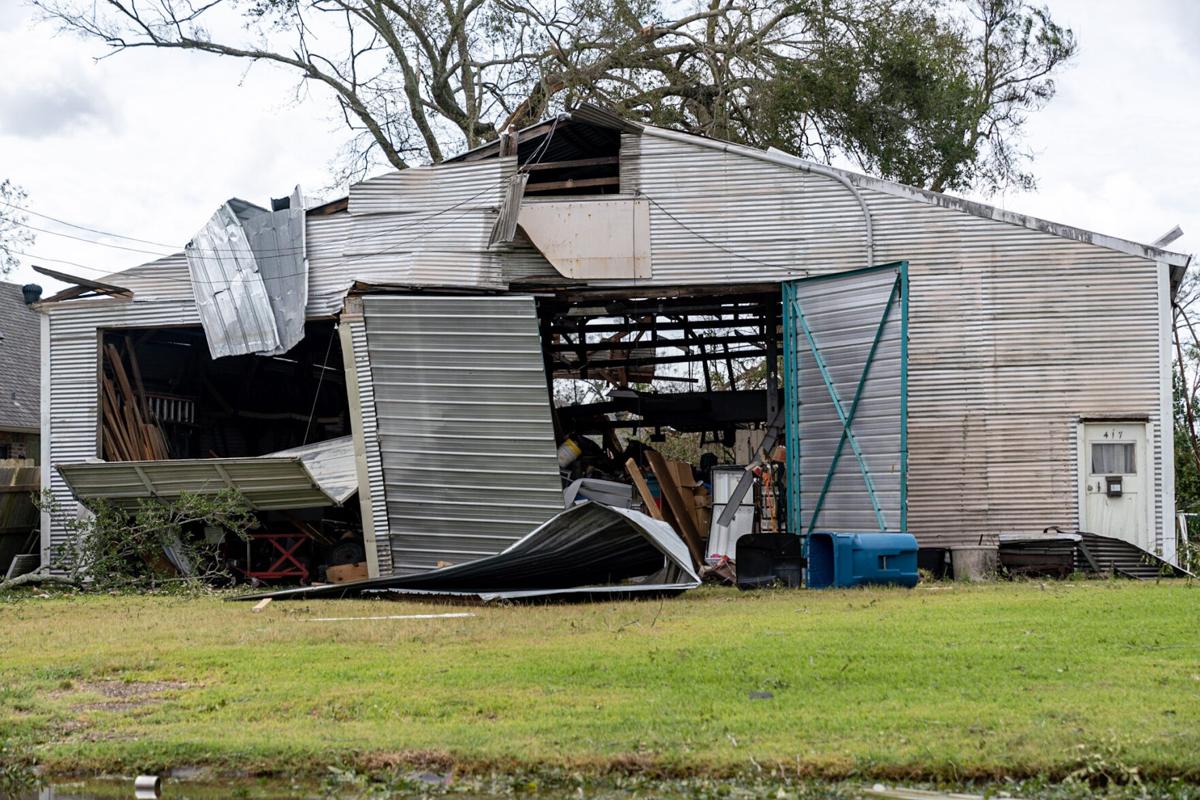 A house is left damaged on Thursday, Aug. 27, 2020, after Hurricane Laura swept through Lake Charles, LA. 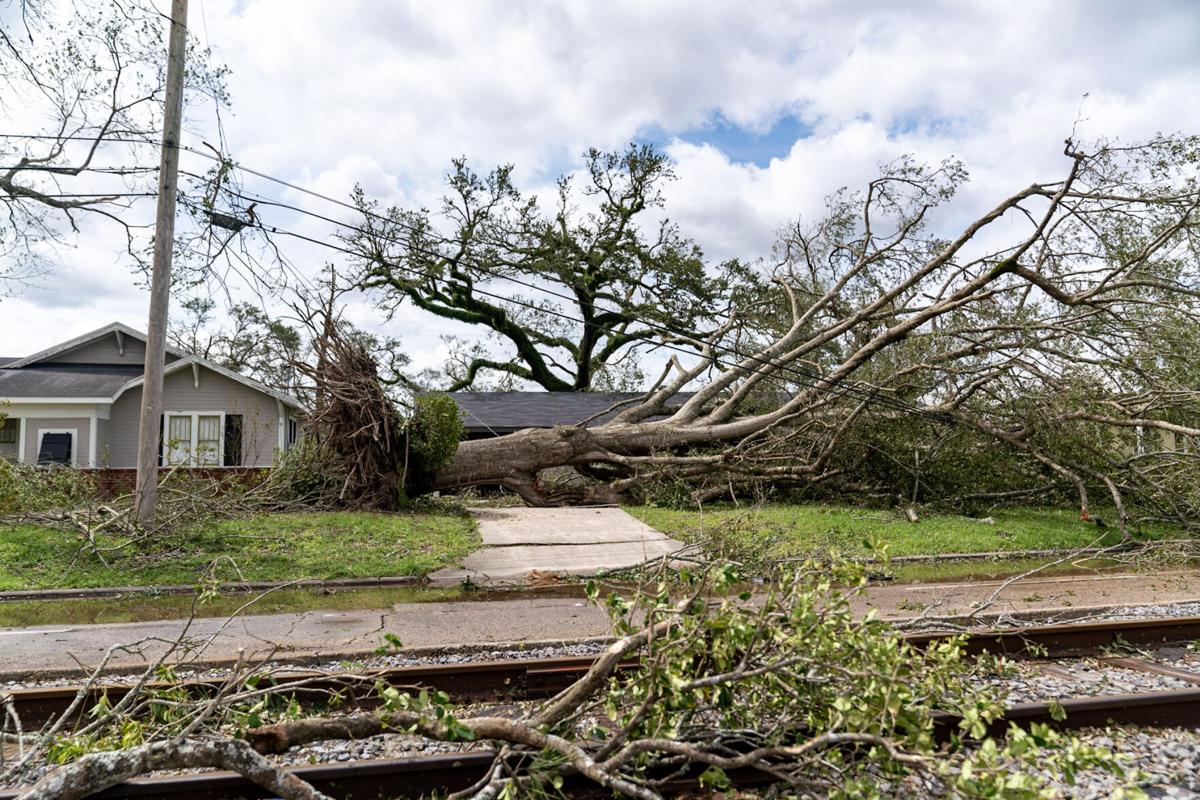 A tree sits on its side on Thursday, Aug. 27, 2020, after Hurricane Laura swept through Lake Charles, LA. 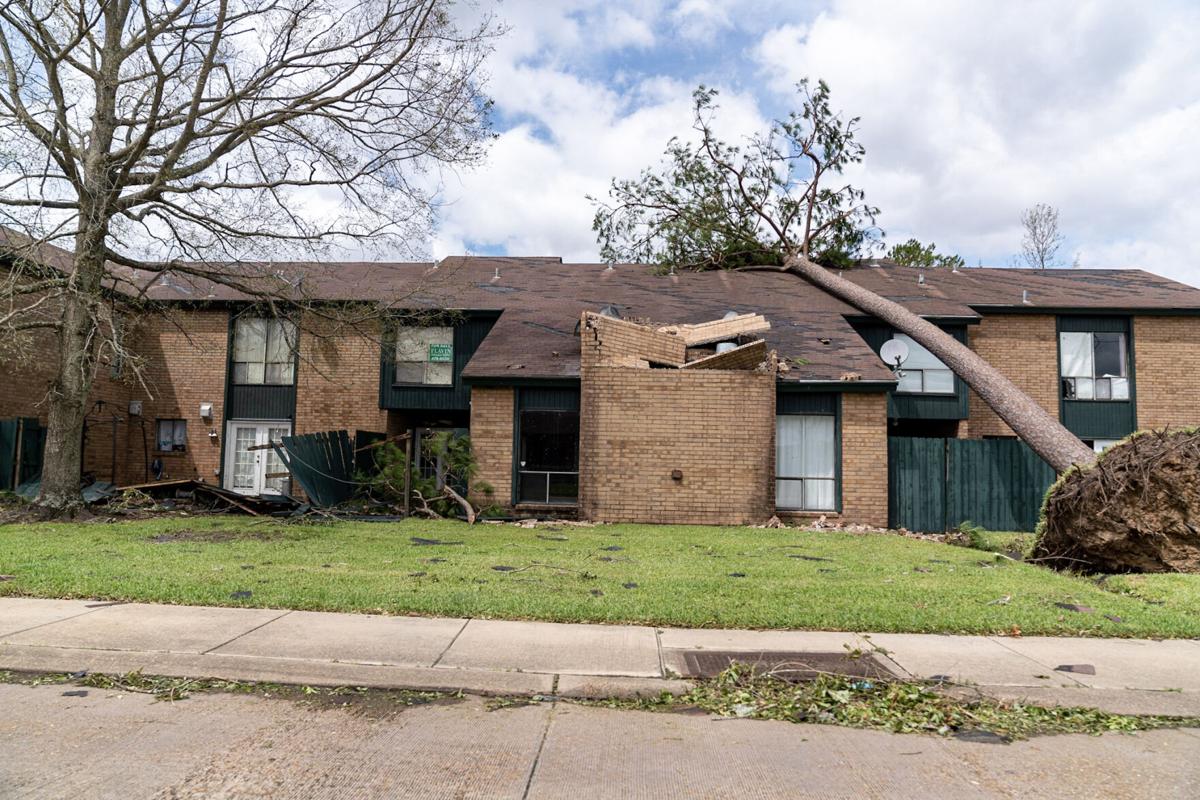 A house is left destroyed by a nearby tree on Thursday, Aug. 27, 2020, after Hurricane Laura swept through Lake Charles, LA. 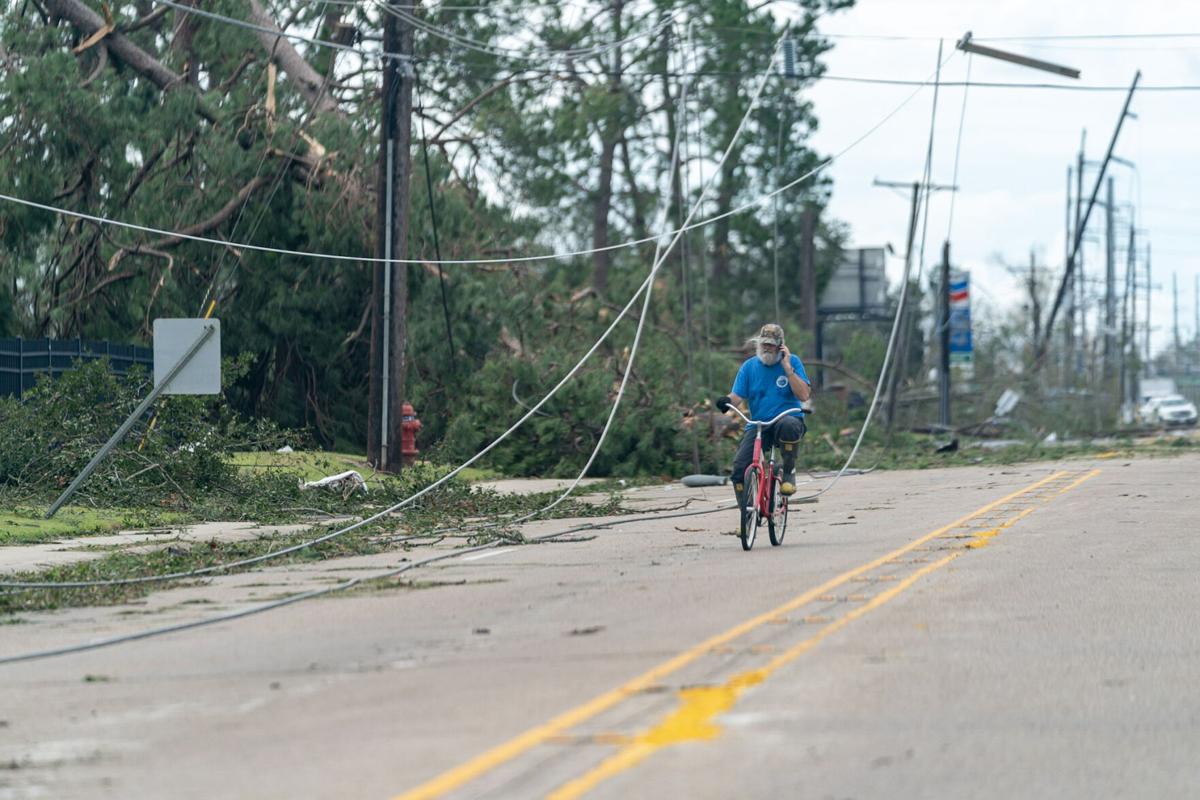 A man rides his bicycle through Lake Charles, LA, on Thursday, Aug. 27, 2020, after Hurricane Laura swept through the area the night before. 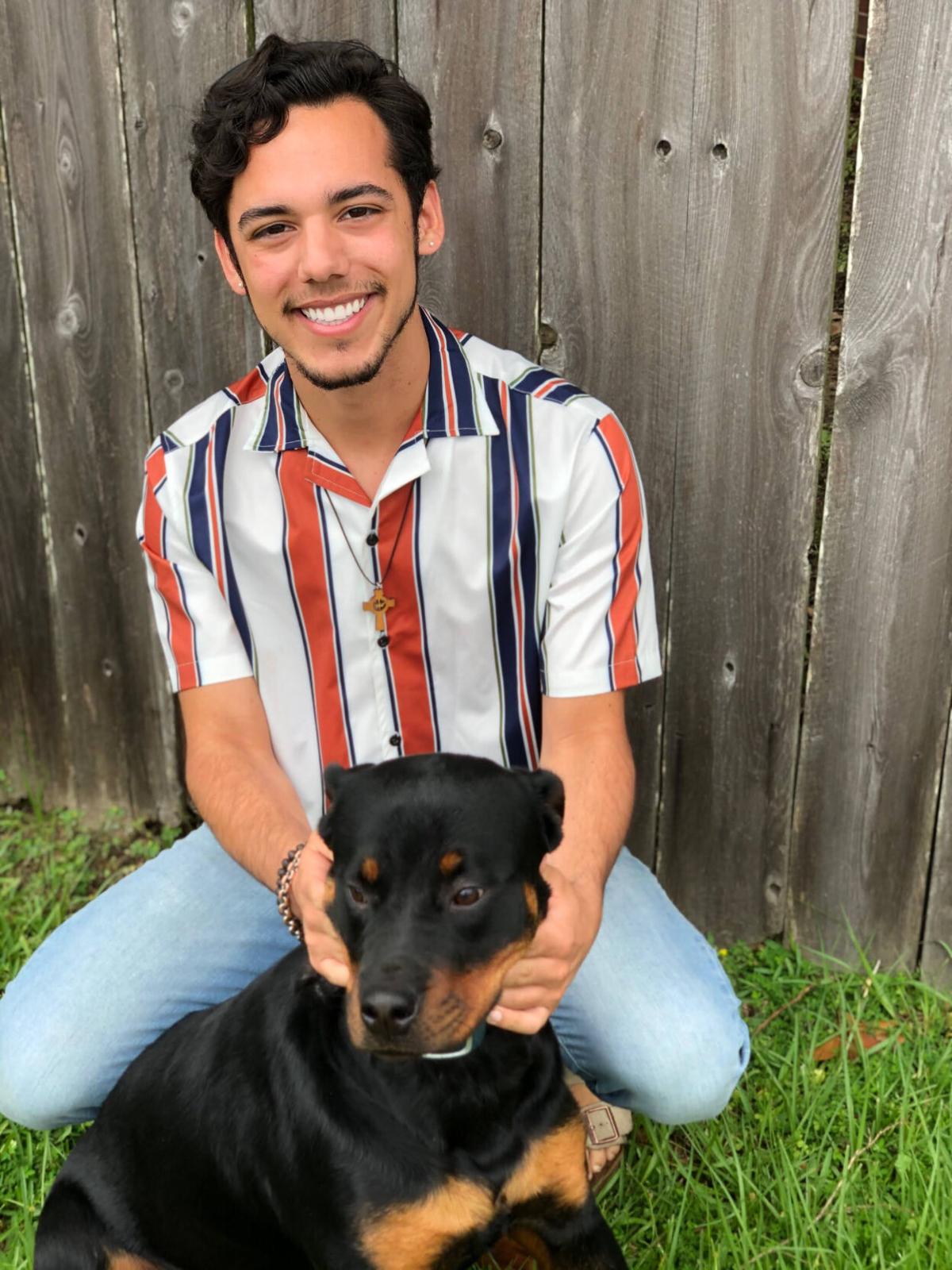 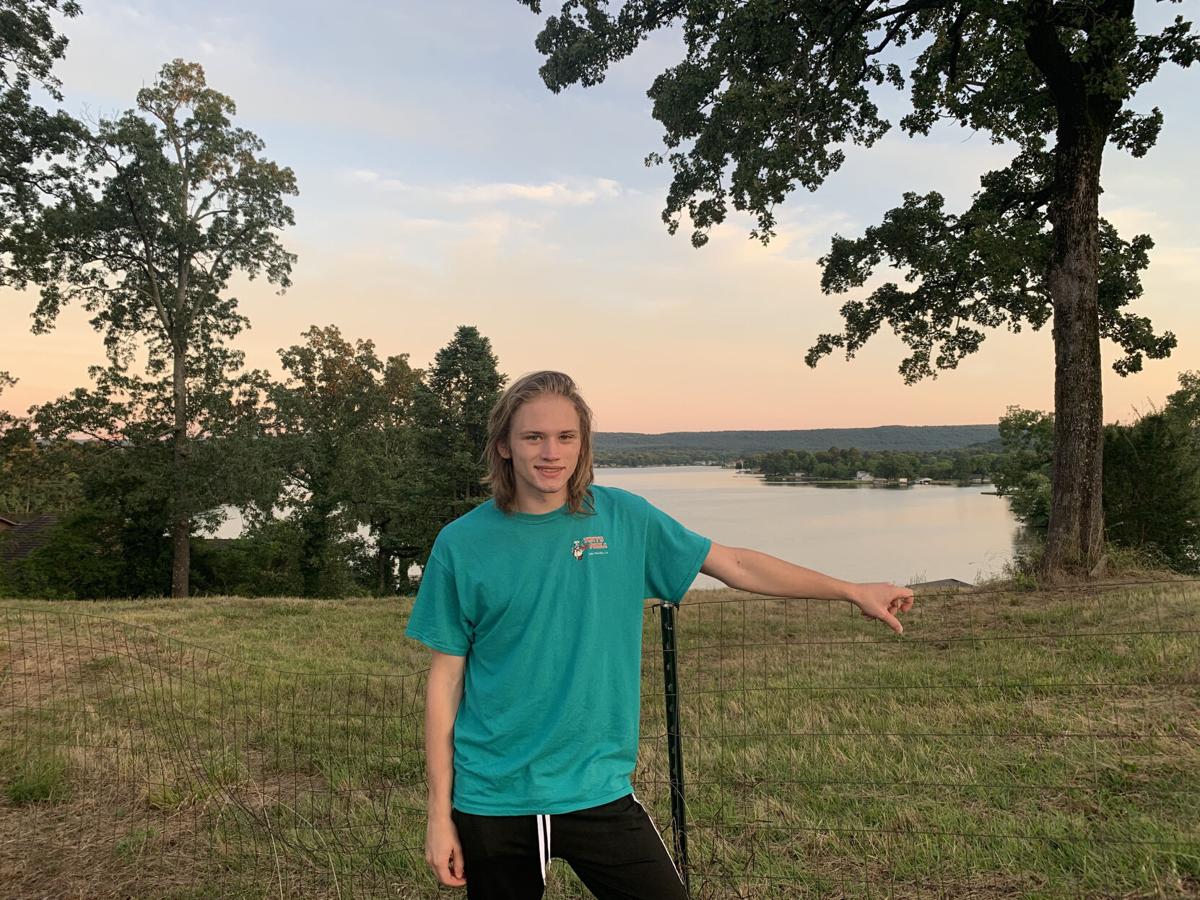 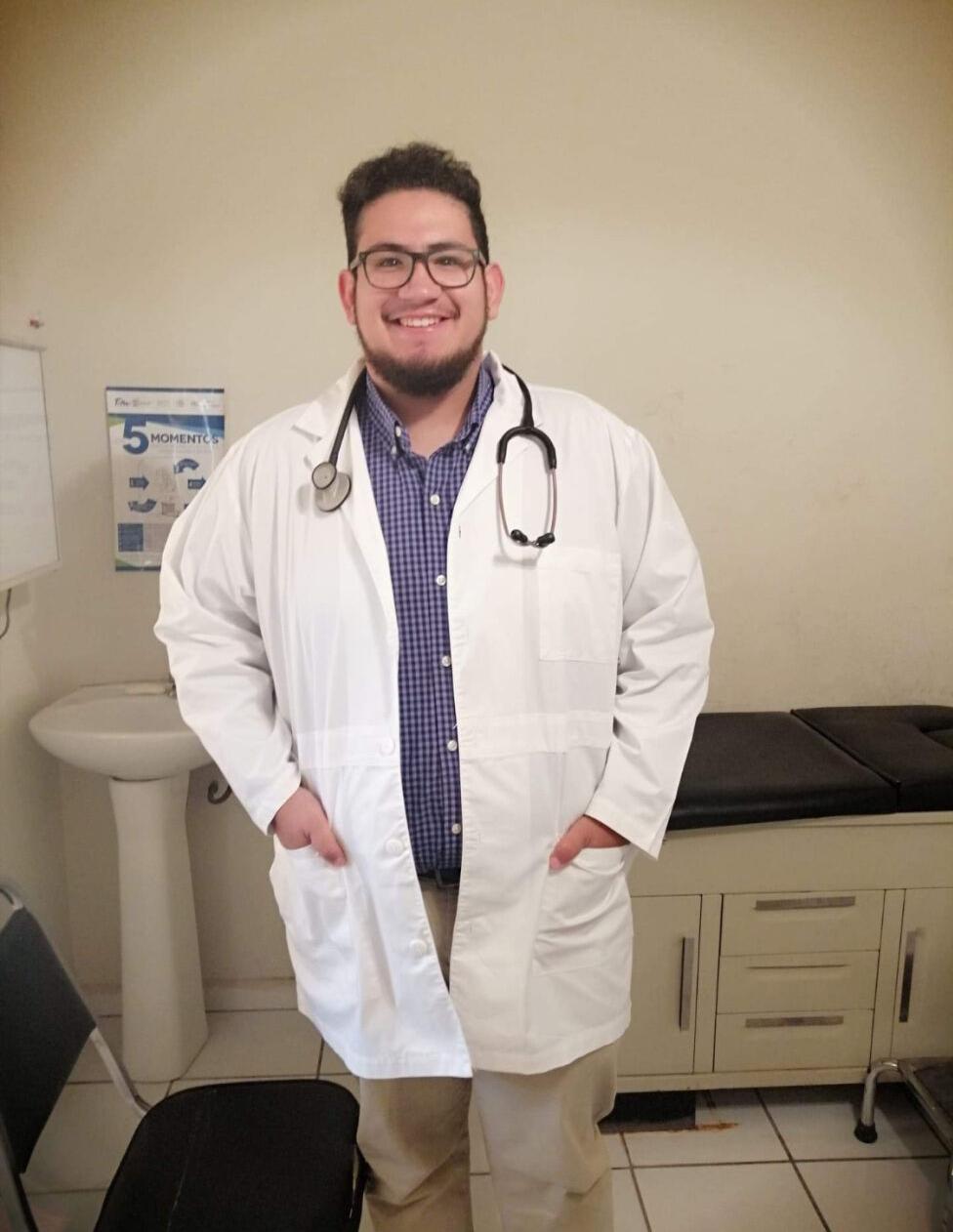 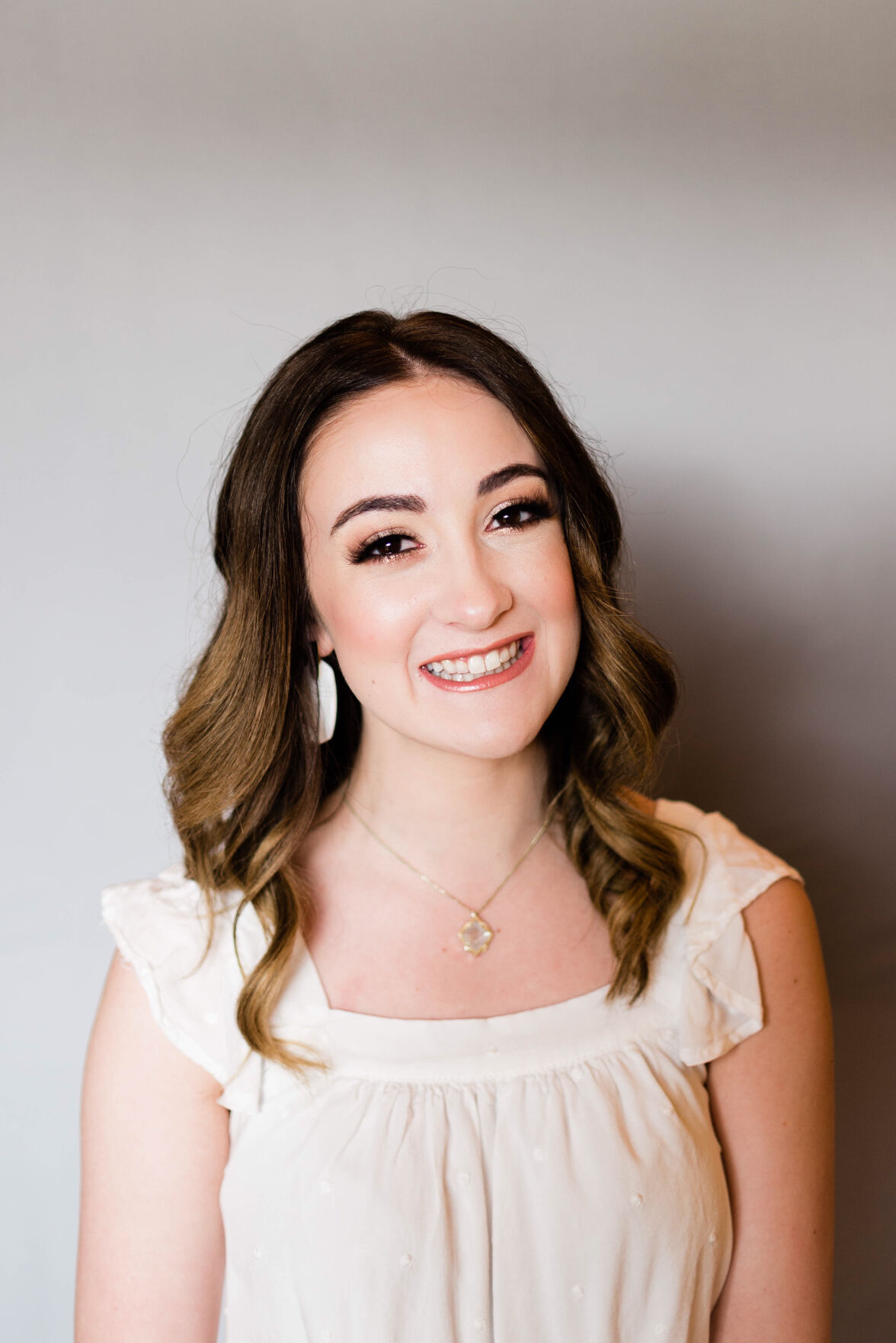 A house is left damaged on Thursday, Aug. 27, 2020, after Hurricane Laura swept through Lake Charles, LA.

A tree sits on its side on Thursday, Aug. 27, 2020, after Hurricane Laura swept through Lake Charles, LA.

A house is left destroyed by a nearby tree on Thursday, Aug. 27, 2020, after Hurricane Laura swept through Lake Charles, LA.

A man rides his bicycle through Lake Charles, LA, on Thursday, Aug. 27, 2020, after Hurricane Laura swept through the area the night before.

When Hurricane Laura made landfall in southwest Louisiana on Aug. 27, many Louisiana residents and LSU students were left without power and clean drinking water for days following the storm.

“In the crazy world of 2020, it seems people are treating Hurricane Laura like southwest Louisiana wasn’t hit as hard as expected,” Bryant said. “In reality, entire communities are devastated and the utilization of a nationwide platform like LSU’s could bring awareness to the needs of southwest Louisiana.”

Many thanks to @LSU and @LSUsports for sending an 18-wheeler loaded with cleaning supplies, water and non-perishable goods for our students, faculty and staff. @FrankWilson28 and @HSchroyer were on campus to thank the LSU crew and assist with offloading the supplies. pic.twitter.com/yEPCFwuMDY

“Students could not remain here; they had to evacuate,” Coreil said. “We called LSU and they immediately opened their arms and said ‘We have student housing available. We can help y'all and put students up there.’ So, we loaded the students onto our athletic buses, and they went to LSU in Baton Rouge and had a great experience. They were fed, taken care of.”

LSUA students spent two nights on LSU’s campus before returning to Alexandria, where Coreil said the damage was extensive.

LSUA students returned from staying a couple of days on the @LSU campus due to power outages. They very much appreciated the hospitality and kindness they received, and we are all sincerely grateful for the support. That is what makes the LSU Family so great! #onelsu pic.twitter.com/HhFZkvg5s6

Interim President Thomas Galligan sent out an email detailing the University’s Hurricane Laura assistance efforts on Aug. 27. Some of the resources available for students include academic advisers, mental health counselors, financial aid and the LSU Food Pantry. Galligan also reminded students of the Student Emergency Support Fund, which provides financial support to students who are unable to meet immediate needs because of an emergency situation.

“Please allow me to extend my condolences to all of you who are suffering loss during these already trying times,” Galligan wrote. “We are here for you and will help to get you through it.”

However, not all students felt supported by the University. As they watched their homes become damaged and feared for their families' lives, students from the University's flagship campus were still expected to attend virtual classes the next day. Here are four student testimonies of their unique experiences with the Category 4 storm:

For public relations junior Austin Wade, Hurricane Laura left his family in a situation many Louisianans are familiar with.

“My dad was planning on staying through the storm, but we were able to convince him to leave the day before the storm,” Wade said. “It was very nerve-racking in the hours leading up to the storm. We were all watching The Weather Channel all day.”

Hurricane Laura made landfall at peak intensity south of Wade’s hometown of Lake Charles as a Category 4 hurricane, with up to 102 mph sustained winds and 137 mph wind gusts recorded.

When Hurricane Laura swept through Louisiana last week, the University canceled classes to prepare for the storm and allow students to evacuat…

“My dad went back the day after, and his house was hit the worst. His house gets worse day by day due to the water damage,” Wade said. “He’s had a pretty rough year, so I could tell this really took a toll on him being that he hasn’t lived in that house for very long and worked hard to earn it.

“I want to do everything I can to help him, but I have school and work to keep up with. There is no way I could help him and keep up with school. The city is totally devastated, and the pictures do it no justice,” Wade said.

Wade spent five hours in traffic one day when traveling home from campus.

"My muscles are tense, and I'm just stressed from the driving alone. In addition to that stress, I have been hauling flooring, repairing roofs and doing yard work, and that has put a strain on my body," Wade said. "My mind and body don't want to focus on school right now when there is so much left to do over there."

Over 200,000 people were ordered to evacuate southwestern Louisiana, causing long lines at gas stations and booked-up hotels in surrounding areas. Public relations junior Jeramie Britt’s hometown of Sulphur was ordered to evacuate ahead of the storm, making life for Britt’s family difficult.

“We evacuated on [Aug.] 25 and have had to bounce around two hotels in Baton Rouge before staying in an Airbnb for the past two nights,” Britt said. “The hotel's price gouged us, so we had to stay in three places in three days."

Britt said his house has structural damage that needs to be repaired. Even if he wanted to return home, power and utilities won’t be restored for at least four to six weeks.

The University canceled classes Aug. 26 and Aug. 27 in anticipation of the storm but resumed operations the following Friday, a day after Hurricane Laura made landfall. For some students, the aftermath of Hurricane Laura has made focusing on school difficult.

Britt said the situation at home prevented him from attending class that Friday, putting him behind in two of his classes.

“I simply couldn’t comfortably attend class while dealing with the mental toll of my hometown being destroyed and moving belongings to other hotels,” Britt said. “I emailed my professors and they were understanding, but it just seemed insensitive on LSU’s part considering the amount of students that are from that area.”

Both of Tanner Aucoin’s parents are fire marshals and were deployed to help clean up the aftermath of Hurricane Laura in Lake Charles, leaving him in a challenging position. The sociology junior left the University to return to his home in Central a day before the storm made landfall to take care of his younger siblings.

“It’s crazy when your parents put their living wills in your hands and say ‘this is in case anything happens to us, make sure you keep hold of this,'” Aucoin said. “[My mother] was giving me everything; she gave me her jewelry, she told me who to call, she gave me the passwords for all the accounts so I could pay the bills, she gave the deed to the house, she gave me the deeds to all the vehicles, she gave me the life insurance policies and all that necessary paperwork. For me that was the biggest way Laura affected me.”

Aucoin said taking care of his younger brothers and balancing his schoolwork was also exhausting.

His day consisted of waking up at 5 a.m. so his mother could sleep as long as possible if she wasn’t already awake. Then, he would wake up his brothers, make sure they were ready for school and get them on the bus. Then he would attend all of his virtual classes, complete his assignments and wait for his brothers to come home.

Aucoin said he and his youngest brother have ADHD, while the middle brother has dyslexia and needs extra help.

“It was being a college student, parent and middle school tutor all in a 24-hour day,” Aucoin said.

History and communication studies junior Madeline Holmes' family moved in with her after their home in Kinder lost electricity for weeks following the storm.

“When the hurricane came through my town, it hit us pretty hard,” Holmes said. "My parents' house was damaged and they didn’t have power for a few weeks, so they had to completely move in with me for about a month. So here I am in my apartment with my mom, my dad, my sister, my dog.”

Holmes said her family situation made attending class difficult, especially since all of her classes are online. Half of her family members are also in weekly Zoom meetings, so it was difficult to find a place in her apartment to do her school work.

“It was my mom, my dad and I all sitting around my little dining room table with headphones in trying to hear our respective meetings," Holmes said.

Holmes said she had to drop a class after having a bad experience with a professor. Her professor emailed the class informing them they still had a quiz due on Aug. 27, despite classes being canceled.

“I emailed him and was like, ‘I was under the impression that this would be pushed back because classes were canceled,'” Holmes said. “Additionally, I explained my situation with my family living with me and being displaced by the hurricane, and he basically just said ‘that sucks, but you still need to do this quiz.’"

Holmes said she dropped the course that afternoon.

“I didn’t want to because that’s going to set me back next semester, but I didn’t feel comfortable taking a class with a professor who clearly didn’t care about his students and their success,” Holmes said.

Holmes said the University could have handled the situation better.

“I definitely think they rushed too quickly to come back,” Holmes said. “It was like a slap in the face for people who were affected in my area.”

A few clouds from time to time. Low 68F. Winds light and variable.