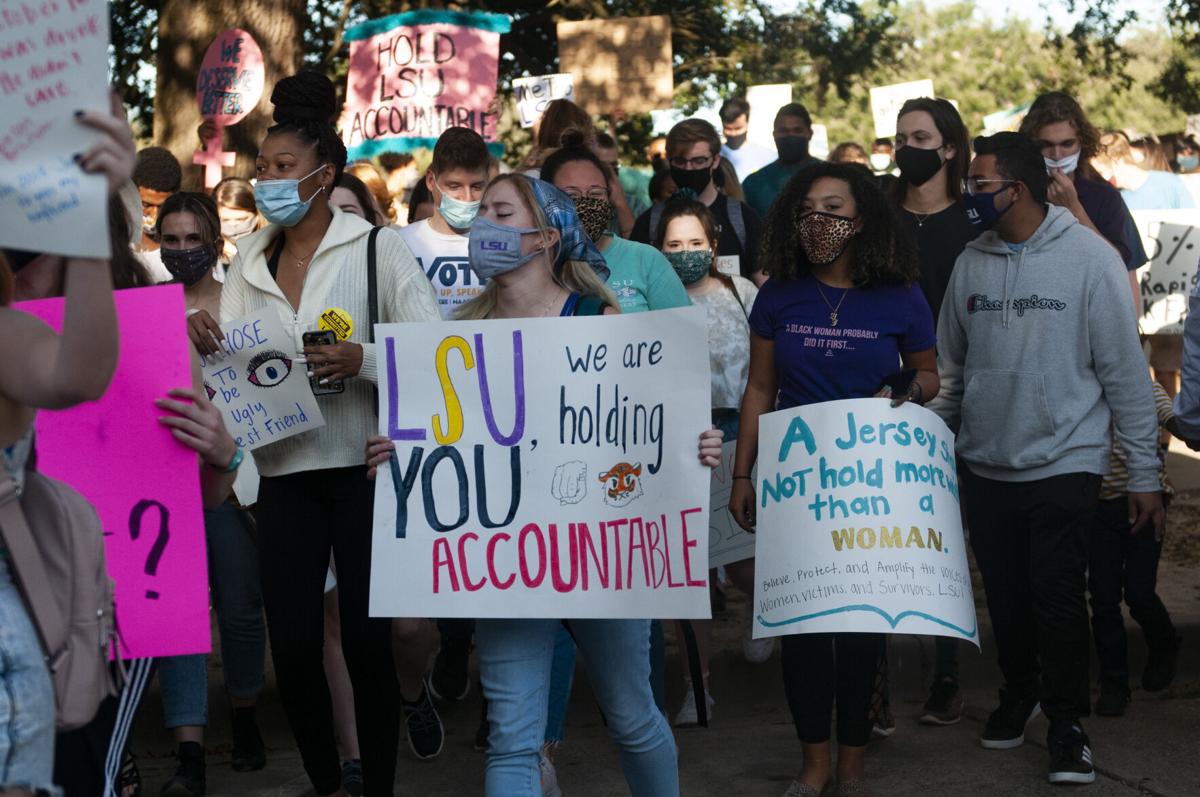 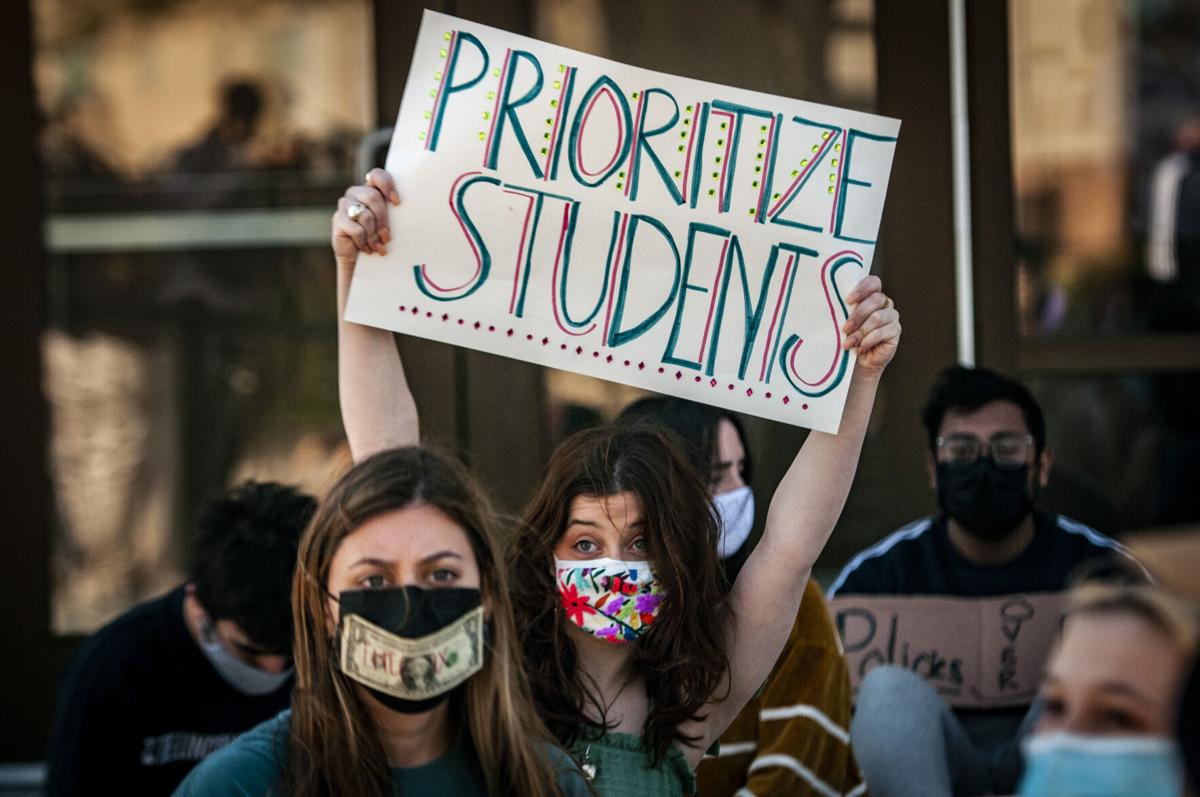 Mass communication senior Mia LeJune displays a sign while blockading entrance on Monday, March 8, 2021 during the Tigers Against Sexual Assault sit-in at the Football Operations Center on Skip Bertman Drive. 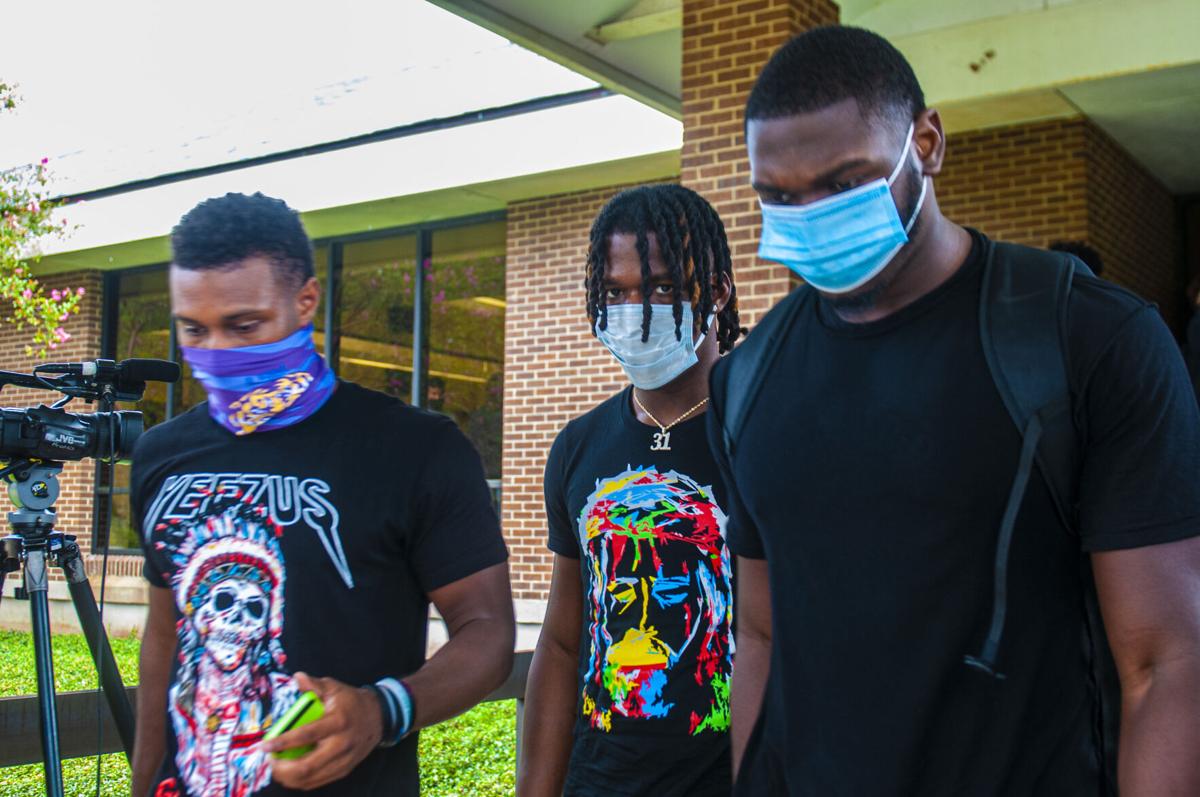 Mass communication senior Mia LeJune displays a sign while blockading entrance on Monday, March 8, 2021 during the Tigers Against Sexual Assault sit-in at the Football Operations Center on Skip Bertman Drive.

The end of next month will mark one year after George Floyd was killed by former Minneapolis police officer Derek Chauvin, leading to an eruption of Black Lives Matter protests across the country in 2020.

Eight days after his death, Black Out LSU organized students to peacefully demonstrate against police brutality and racial inequality in the Quad. It would be the first protest of many in a year at LSU that was characterized by student activism.

From the protests that erupted in Baton Rouge after the death of George Floyd, to the sit-in protests against the University’s mishandling of sexual assault allegations, students have put constant pressure on local leaders and administrators throughout the 2020-21 school year.

Floyd’s death led to a surge of Black Lives Matter demonstrations that quickly spread from Minneapolis to the entire country. Between May 26, the day after Floyd’s death, and August 22, the Armed Conflict Location and Event Data Project recorded over 7,750 demonstrations linked to the BLM movement across more than 2,440 locations in all 50 states and Washington, DC.

Members of Black Out LSU, a campaign created in 2015 to speak out against racial injustices, had to figure out how to make an impact on campus in the middle of a pandemic. The activists met every night via Zoom prior to the group’s first demonstration June 3. Political communication senior and Black Out LSU member Justin Franklin stressed that every move made by his group was fully thought out prior to implementation.

“We were very intentional and calculated with everything we did,” Franklin said, “Organizing very strategically our layout, coordinating with press, getting together our press release.”

The June 3 demonstration saw a crowd of over one hundred protestors gathered in the Quad. University administration was present, including Interim President Thomas Galligan and Executive Vice President and Provost Stacia Haynie.

Following the protest, Black student leaders began discussions with the University administration about bringing more social justice to campus. Franklin said they didn’t want to let the fever of the summer pass by the University.

“The eyes were all over the country, on businesses, on corporations, on teams — so why shouldn’t eyes be on LSU, where we have issues of institutional racism, these systemic problems at LSU,” Franklin said. “It was all the more time for us to take a look inward.”

Almost a week after Jacob Blake was left paralyzed after being shot seven times by a police officer in Kenosha, Wisconsin, LSU football players joined other sports teams across the nation in protest of racial inequality and led a march across campus.

Instead of attending practice that Friday, the players marched from Tiger Stadium to Interim President Tom Galligan’s office, where they spoke with the University’s interim president outside before moving indoors.

LSU football safety JaCoby Stevens said after the meeting that the actions of athletes across the country inspired the march. Stevens said previous generations of his family fought for civil rights, so he felt that he had no choice but to protest.

“I really don’t have a choice because of the color of my skin,” Stevens said, “But I just have so many great people in my family who really fought for civil rights, and I feel like I need to take on that burden.”

Protests continued into the fall, with students leading a march on the Parades Ground to support the Black Lives Matter movement on Sept. 5. Halfway through the nearly one-mile walk, the group paused to hear speeches from sports administration sophomore TJ Polk, who organized the demonstration, and Galligan.

“It’s important that we continue to keep this conversation alive,” Polk said. “The purpose for this event was to come together as a community and use our voices to . . . fight social injustice in America.”

“When we say Black lives matter, and Black lives do matter, it’s a statement of love, of hope and of unity,” Galligan said. “Go into the community and shine the light and be the change you want to see in the world.”

USA Today’s investigation, published Nov. 16, found members of the University’s administration and Athletic Department ignored sexual misconduct complaints against top athletes and other students, denied victims’ requests for protection and subjected victims to further harm at the hands of their abusers.

Student leaders immediately began organizing a protest demanding the University take responsibility for its negligence and for the resignation of employees who did not appropriately investigate claims. Tigers Against Sexual Assault co-president Angelina Cantelli said that students needed to protest to show their anger.

“Everyone was mad,” Cantelli said. “I thought it was worth it to show LSU that we stand united on this.”

Cantelli said TASA struggled to get students engaged to talk about sexual assault on campus before the protest in the fall.

“In the fall protest, we saw a lot of people coming up and sharing stories of them being sexually assaulted or them reporting something and it being mishandled by LSU,” Cantelli said. “It opened up a space for people to share their stories.”

TASA organized a sit-in at the LSU Football Operations Center hours after the release of the Husch Blackwell report. The organization had previously demanded last fall that any University employees found to have covered up sexual assault be immediately terminated.

TASA chose the location because it wanted to reach student athletes, Cantelli said.

“It’s one thing to have TASA upset about these things, but it’s another to have student athletes upset about it,” she said.

Although there was a brief confrontation from student athletes who wanted to know why the protestors were disrupting their schedules, Cantelli said the sit-in opened a dialogue between student athletes and TASA.

“Since that first conversation [with the athletes], our relationship with them has grown exponentially,” Cantelli said. “We worked on sexual assault month events together and a video educating the campus community about sexual assault.”

“Seeing student athletes get engaged shows that what we wanted to do with the sit-in was achieved, and I think that’s a really big win,” Cantelli said.

Students haven’t hesitated to organize and have their voices heard on campus in the past year. Racial injustice and police brutality continue to receive international attention in the U.S., and the University is still under the spotlight by state legislators and sexual assault advocacy groups for its Title IX mishandlings.

“Everything has been a great start,” Franklin said. “Nothing was going to change over night. We were happy with the governor’s support, with the board’s support of Troy Middelton’s name from the library. I think that was the signal to us that we’re serious about creating some change. A lot of things have not come to complete fruition. The work is far from over.”

“Planning protests can be exhausting,” Cantelli said. “Eventually, this scandal will probably not be talked about at LSU and we still want TASA to be doing the work we’re doing now at that point.”

Scattered thunderstorms in the evening, then mainly cloudy overnight with thunderstorms likely. Low near 70F. Winds S at 10 to 15 mph. Chance of rain 80%.

Partial cloudiness early, with scattered showers and thunderstorms later during the night. Low near 70F. Winds light and variable. Chance of rain 50%.