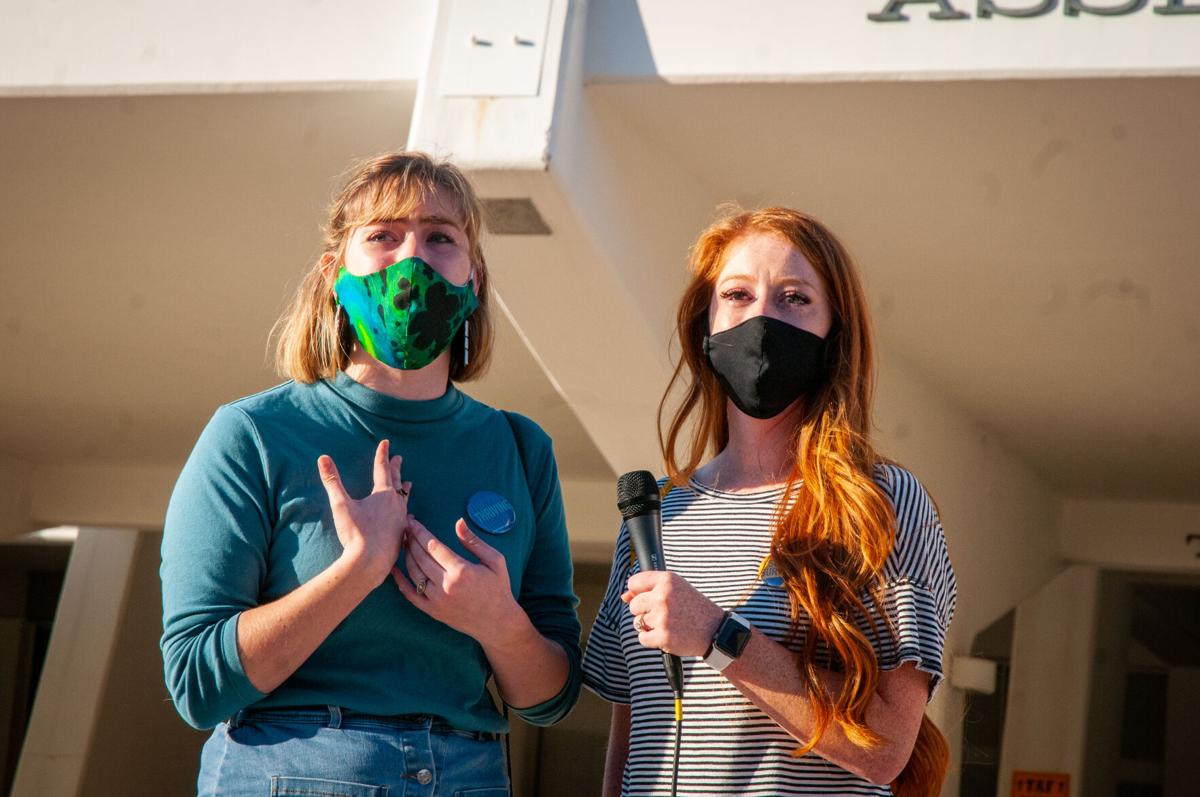 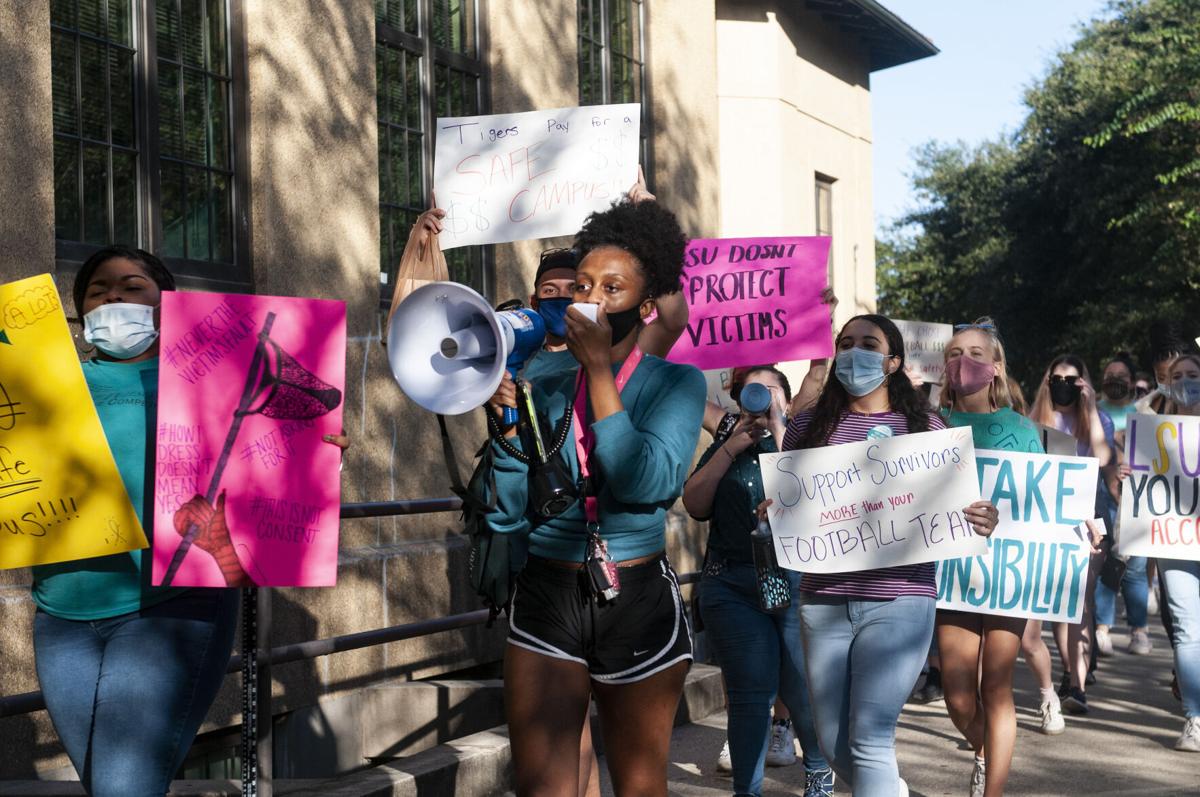 USA Today released a report on Nov. 16 condemning LSU’s mishandling of sexual assault cases, including some against the University’s athletes. The report detailed experiences of several female students and highlighted that in many of the cases, upper-level administration had knowledge of the abuse and denied reporting it — violating Title IX laws.

The University commissioned independent law firm Husch Blackwell to review the handling of sexual assault cases at LSU in a comprehensive investigation after the USA Today report surfaced. The review, which will include extensive interviews with staff and students to evaluate every aspect of the sexual assault reporting process, is set to conclude in February.

Student leaders began organizing a protest immediately following the report. Over 200 students gathered on Nov. 20 to protest the administration’s misconduct and lack of accountability in sexual assault cases over the past decade.

Alaysia Johnson, chairwoman of BWEI at LSU, said a campus culture shift must take place for LSU to start listening to survivors and respecting their stories.

“This is not a moment. This is a movement,” Johnson said at the protest. “We’re here in front of Tiger Stadium to say ‘We are tired.’ When we get a new president, when we get a new football team, we still won’t be done.”

The Reveille spoke to student leaders and University administrators about the direction this movement will take this semester, two months after the initial report was published.

Former LSU student Samantha Brennan sued LSU in October for withholding Title IX documents from her regarding an investigation with former football player Derrius Guice, who allegedly photographed her without her consent in 2016.

Brennan was introduced to Guice at Tigerland, and later learned that a partially nude photograph of her taken by Guice was circulating around the football team. Brennan reported the incident to LSUPD on July 22, 2016, but no investigation was conducted after Brennan refused to press charges against Guice.

On Aug. 19, Brennan requested the police records related to her allegation against Guice. After several delays, LSU produced a four sentence “initial report” that failed to include Guice’s name — a direct violation of Louisiana law — or the accusation that he sent the photo to other students.

After Brennan contacted LSUPD and other departments, LSU relinquished a redacted copy of the original police report. The names of Guice and one other witness were not included in the document.

On behalf of Brennan, USA Today filed a lawsuit against LSU and Interim President Thomas Galligan on the grounds of improperly redacting and withholding official police records. Judge Janice Clark ruled in favor of Brennan on Dec. 29 and ordered LSU to make monetary reparations to both Brennan and USA Today, as well as release an unredacted copy of the report to both parties.

Clark wrote that LSU’s response to Brennan’s request for police records was “unreasonable, arbitrary and capricious in its refusal and delay and the redacted manner in which the documents were produced.”

Brennan told USA Today the ruling is a “win for all of the victims out there that have not received the justice they deserve.”

LSU Vice President of Legal Affairs and General Counsel Winston G. DeCuir Jr. said the ruling will discourage students from involving themselves in future investigations due to the lack of privacy.

Student Body President Stone Cox said Student Government is forming a special committee to investigate and address similar instances of misconduct by the University. While the committee is not yet formalized, it will be active this semester.

Cox, who also serves as the student member on the Board of Supervisors, said he is confident in Husch Blackwell’s ability to fully examine the University’s conduct by having access to information students and other members of LSU wouldn’t be privy to.

“What I plan to do as a board member is wait and see what the report looks like and then make appropriate plans from there,” Cox said. “It’s really going to depend on the outcome of their investigation. But, obviously I will be looking over it very carefully and making sure that any appropriate action that needs to take place will take place.”

Angelina Cantelli, deputy chief of staff for Student Government and co-president of Tigers Against Sexual Assault, will head the SG committee to address the University’s misconduct. The committee will focus on holding LSU’s administration accountable for its actions and providing resources for survivors.

Cantelli’s goal for the committee is to encourage strict action against those who played a role in covering up any sexual assault allegations. She also believes the current Title IX laws should be extensively reformed and there should be an easier path for victims to report their assaulters.

“Red tape needs to be removed so it is as easy as possible for a survivor to report and have action taken against their abuser,” Cantelli said.

Angel Upshaw, co-president of TASA, said that as a result of the USA Today article, her organization called for the immediate removal of any faculty who violated Title IX laws or were complicit in the mishandling of sexual assault cases. She and Cantelli have also met with Husch Blackwell to “monitor” its progress in the investigation.

“So far, they seem to have a lot of passion for holding responsible persons accountable, so fingers crossed,” Upshaw said.

TASA is launching a new survivor support group this semester to help victims of sexual violence discuss their experiences and find healthy coping mechanisms. TASA’s executive board will also continue to hold meetings with Galligan, Provost Haynie and Husch Blackwell representatives to express the hopes and concerns of the student body in the law firm’s ongoing investigation.

On Nov. 16, the evening after the USA Today report was released, two student leaders composed a letter examining the new information that had come to light and calling for immediate action from LSU. Cantelli and Upshaw were two of the 26 student leaders who signed the letter.

“We are calling for the immediate resignation of any administration or staff of LSU or LSU Athletics who have either actively mishandled, suppressed Title IX claims or have knowledge of the mishandling or suppression and failed to act,” the letter read.

“As a female student of this school, I feel like it should be the No. 1 priority of the administration to protect their students,” Lejeune said. “Students did the right things. They went to the right officials, and they were still ignored. That spoke volumes to me.”

Lejeune also wishes LSU offered more resources for students who have been sexually assaulted or harassed so they can receive the mental health care and guidance they need.

“I know so many women who have been sexually harassed or assaulted on this campus and feel like they don’t have a place to go when it comes to mental health resources,” Lejeune said.

Verge Ausberry, executive deputy athletics director and a former member of the University’s Presidential Search Committee, was one of the University officials named in the USA Today report. The report alleged Ausberry and other athletics officials concealed reports of sexual assault. Ausberry voluntarily resigned from the committee on Dec. 17.

Galligan said in a December Board of Supervisors meeting that it is important to let Husch Blackwell take its time to complete the investigation. He said the University is having conversations about reporting sexual assaults with STAR (Sexual Trauma Awareness & Response) and similar groups.

“Going forward, we have stressed to our employees that everyone is required to report instances of sexual or domestic assault,” Galligan said. “We are also partnering with STAR to look at more comprehensive ways to educate and train our community.”