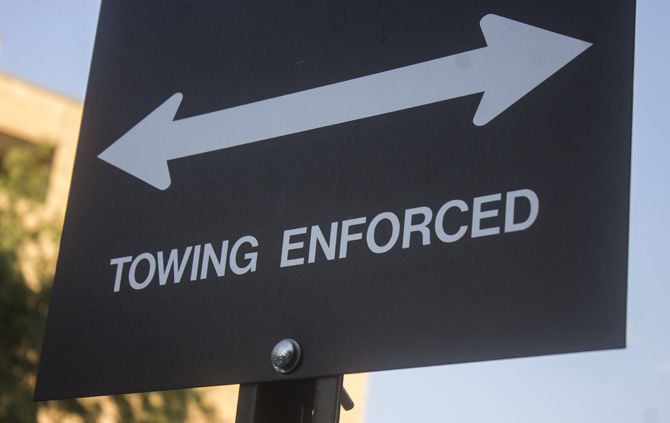 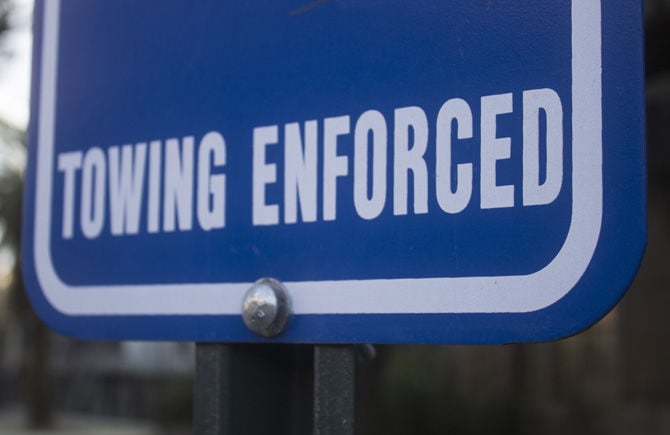 Sydney Clebert parked her car after returning to her residence hall on a Sunday. The next Tuesday, she discovered her car had been towed.

Clebert, an entrepreneurship and computer science freshman, believed she had parked legally and originally assumed her car was stolen. When she called LSUPD to report a missing car, an officer told her it was most likely towed.

When Clebert asked Brown Towing, the University’s contracted towing company, what price she would have to pay to retrieve her car, she could not get a clear answer over the phone.

1,072 cars have been towed from the University's campus in the 2019-2020 academic year, according to Director of Parking and Transportation Services Mike Harris.

According to Harris, the priority of the tow dictates whether a car is ticketed or towed. If a parked car is causing a public safety hazard such as obstructing traffic, blocking handicap zones or blocking fire lanes, they will be handled first.

Some towing companies will not allow University employees to ride in the tow truck due to insurance purposes, Harris said. The University looks to contract companies that allow a non-towing employee in the truck to ensure procedures are followed.

Executive Director of Facility and Property Oversight Tammy Millican said towing companies’ rates are set by the Louisiana Public Service Commission; it is not common to see companies charge more or less than others.

“What they [LSU] will do when looking for a towing contract is look for the lowest bidder for services, but also as to if they can offer the type of service and the number of tow trucks we need,” Millican said.

Brown Towing employee Bourgeois Gomez said LSUPD calls Brown and informs the company when there is a car that needs to be towed. When asked about the price of towing, he said that it is under the University’s control.

“You would have to talk to them [LSU] about that,” Gomez said. “They control all of that [the price of towing].”

Clebert said she doesn’t move her car often because of the lack of student parking on the east side of campus. It took her a day to realize her car was missing; she never received notification from the University or Brown Towing that her car was towed.

“I had only been parked there for one day; thank God,” Clebert said. “Had I not gone home that night, they would have kept charging me, and I would have never known.”

Millican said warning calls occurred prior to two weeks ago, but they’re now being strictly enforced by Harris, the department’s new leader. 15-minute warning calls are also dependent on having a current phone number to contact; students supply a phone number when registering a vehicle.

When Clebert went to retrieve her car at Brown Towing, she saw she had also been issued two tickets. The second ticket was written a few hours before she was towed, Clebert said.

“It doesn’t make sense to give me a ticket if I was just going to be towed a couple of hours later anyway,” Clebert said.

Clebert approached a Brown Towing employee and showed her pictures of where she had parked before she was towed.

The pictures revealed Clebert parked in a resident parking spot right next to a green Zone Three parking sign. The Brown Towing employee said the yellow curb originally had “no parking” painted on it, but the paint had been weathered and was no longer visible.

“They have not done upkeep so I should not be responsible for incorrectly parking when they did not keep up with the paint,” Clebert said.

Another Brown Towing employee suggested Clebert could have gotten towed because she parked next to a tree.

“In what world am I supposed to know that you can get towed for parking by a tree?” Clebert said. “There is no law against parking next to a tree.”

Clebert said one of the employees suggested she appeal the tow.

Parking and Transportation Services encourages students to use the appeal process. According to Millican, the appeal process takes place in front of a group of peers selected by Student Government. An appeal can be sustained or overturned, but it is a fair process for students.

“We make sure that we have a group that is not affiliated with parking to look at each situation,” Millican said. “They are free to sustain or overturn.”

The person to whom the citation was issued must make the appeal, according to the Parking and Transportation Services website. The citation has to be paid within 14 days of the violation; diagrams, photos and other supporting documentation must be submitted with the appeal. The website also states inability to find a permitted parking space is not a valid reason for incorrect parking.

Clebert is currently undergoing the appeal process. If she loses, she will have to pay a $5 fine for each appeal lost.

“I only move my car when I absolutely have to because, on average, it takes me 20 minutes to find a spot,” Clebert said. “If I see any parking space that looks available, I am going to take it. I paid $165 to park on this campus, and I can’t find any parking where I live. Every lot on the east side of campus is always full.”

Students must pay $80 for a semester parking permit and $165 for an annual parking permit, according to Parking and Transportation Services.

There are 5,836 resident parking spots available on campus, but Parking and Transportation Services has sold 5,845 resident parking permits as of Feb. 12, according to Harris. There is no limit to how many passes can be sold.

Millican said at any given time, some students should be driving or off-campus and not in need of a parking spot.

“When I first started working with parking, I said you should sell the exact number of passes,” Millican said. “But the truth is, we are not all here at the same time every day. In any parking organization, they are always going to sell over.”

“When looking at residential you want to get as close to 1:1 as you can because those folks live here 24/7,” Harris said.

Editorial Board: LSU's lack of security camera transparency is dangerous, must be addressed

Entrepreneurship and management freshman Brennan Bourg thinks overselling by only nine passes may not seem like a big number, but it can be an issue. Drivers often park in the wrong zones, and that may not be taken into account when overselling.

“No resident is driving at 4 in the morning; in the middle of the night, everyone needs a parking spot,” Bourg said. “What happens to those nine cars when it is time to sleep and there is nowhere for them to go?”

Parking and Transportation Services sent a Feb. 13 email to students informing them that the East Campus Apartment lots, one of the largest residential lots on the east side of campus, will be unavailable from Feb. 17 to April 24. Owners who do not move their vehicles before that time will be subject to citation and towing.

“Not only do they oversell passes but they also take away parking for construction, which furthers the disparity between people who have passes and available parking,” Clebert said.

The fight against towing is not just an on-campus issue. Students are also fighting back against Riverside Towing, a towing company that a group of mass communication seniors say is operating in the grey area of Louisiana law to target college students. The group started a “Wreck Riverside” campaign against the controversial company.

“We were all talking and comparing something that we all care about,” Dunnam said. “We realized that we all knew someone who has been affected by Riverside. We wanted people to feel like their voice is truly getting heard, so we started a petition against Riverside.”

The group has used social media to push the campaign and gather stories of Riverside victims. By creating a platform for victims to speak out, they have received shocking stories about the company and over 1,300 signatures to hold Riverside accountable.

“The second you get off campus you are in the predatory grey area of towing,” Hunt said. “We have heard stories of students going into a business for a set amount of time, and their car will be towed when they are done. It does not seem like the tow drivers have any idea whether or not that person was a customer or not.”

The group created the email, wreckriversidetowing@gmail.com, to collect stories for research. The campaign is still in the initial states of research, but the group believes that the more they research and understand the law, the more grey area Riverside seems to operate under.

The Reveille contacted Riverside Towing several times for this article, but the company declined to comment.

In the future, the group hopes to bring attention to the need to create laws that will protect the community from predatory towing. By spotlighting Riverside and demanding they do their due diligence before towing students, the group hopes to show students they can speak up and demand fair treatment.