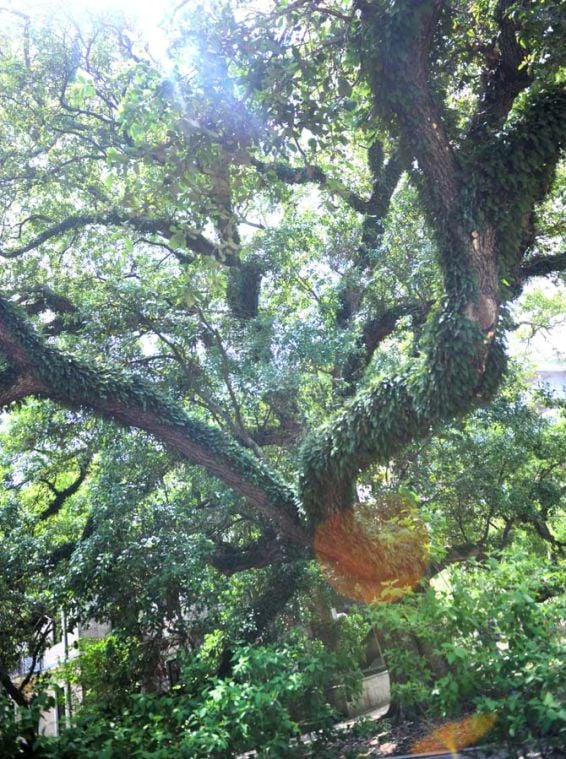 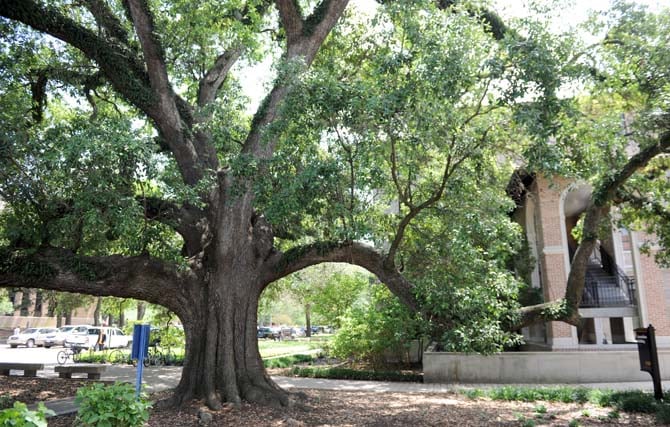 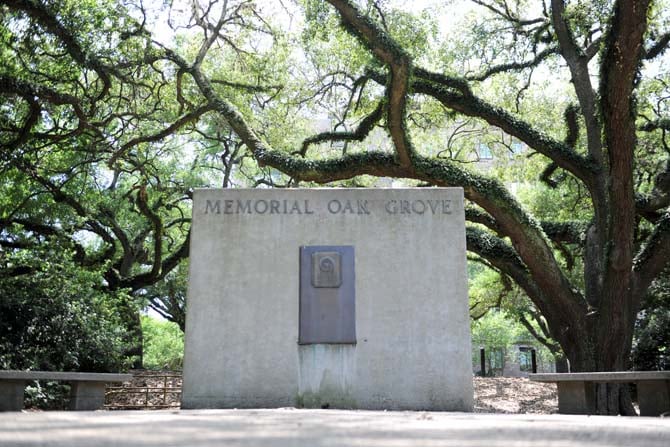 A stone monument siginifies the location of Memorial Oak Grove, which was dedicated in 1926 for the memory of fallen soldiers in World War I.

A stone monument siginifies the location of Memorial Oak Grove, which was dedicated in 1926 for the memory of fallen soldiers in World War I.

Steele Burden, the University’s landscaper from 1932 through 1970, began a legacy decades ago when he began planting many of the campus’ iconic live oak trees, which now tower over faculty, students and visitors at almost every step.

Today, about 1,300 to 1,400 southern live oaks, scientifically named Quercus virginiana, stand limb-in-limb, making up nearly a fifth of the 6,000 trees and an even smaller percentage of the more than 40 plant species on campus, which have been appraised at $45 million in assets to the University.

Fred Fellner, assistant director of Landscape Services, and many others work to continue Burden’s mission every day through tree maintenance and the Endow an Oak program, which was introduced in 1993 to better the condition of oaks that suffered during “budget limitations,” according to the LSU Foundation’s website.

“I think the University has accomplished Burden’s and the people who originally planted the trees mission,” Fellner said. “We’re just carrying it on with the time.”

The trees that sprawl across campus are aesthetically, environmentally and psychologically beneficial, according to Fellner, who wrote his Ph.D. dissertation about LSU’s urban forest in 2011 while attending Southern University.

Fellner said the psychological effects are found in the opportunity for students to study, rest and connect with nature under the umbrella of southern live oaks. He said students are drawn to the trees, and they contribute to the full university experience.

“LSU has a feel to it, an ambience. It’s a special place,” he said. “[Students] are connecting with the trees, and they’re not even putting it into words. You know there are even people hanging hammocks in the trees now?”

A person can endow a tree by donating money — $50,000 for oaks in the Quad, $4,000 for the other oaks around campus. A plaque that displays the donor’s name is placed at the base of the endowed tree.

Half of the money is secured in an endowment fund, milking money from interest that equals about $20,000 to $30,000 a year, Fellner said. The other half, combined with the roughly quarter-million dollar budget, is used for upkeep of the University’s landscape, he added.

This includes running copper cables down the limbs and trunk of the trees to protect them from lightning strikes and constructing walkways made of special bricks that allow water to percolate into root systems, Fellner said.

Most of the day will be spent nurturing the campus’ trees, which are the landscape’s “salient feature,” Fellner said. Many campuses plant droves of flowers, he said, but “our campus is a little bit more of a rough-and-ready place. It’s more of a forest. Plus we have to put up with football.”

Due in part to the aforementioned efforts, the University was named a Tree Campus USA by the Arbor Day Foundation in 2012. The national program was created in 2008 to honor universities for effective campus forest management and for engaging staff and students in conservation goals.

There are currently five oaks in the Quad available for endowment and several other oaks available campus-wide.

Among the vacant endowments is the mammoth oak that has stood in front of and in between the Journalism Building and Hodges Hall for more than 200 years, Fellner said. The tree’s diameter is measured at 62 inches and the crown — the upper, leafy part of a tree — is 60 feet tall by 45 feet wide.

The ancient green sage has lived in two centuries and watched a slew of events — wars, beginning with the Civil War; budget cuts; the arrival of the first female students; the football team’s debut kickoff and the current system reorganization — happen beneath its reaching limbs.

Live oaks dripping with history, as if it were sap, can be found all around campus.

Thirty-one trees found in the Memorial Oak Grove, just south of the Student Union, were dedicated on March 12, 1926, for past University students and one unknown soldier who died during World War I, according to Peter Soderbergh in his book, “Tower, Tablet, and Tree: LSU and the American Legion: the Interwar Years, 1919-1941.”

Because of its history as a military institution, the University was “more determined than most universities to properly memorialize her fallen servicemen,” according to Soderbergh.

The oak saplings were donated by a well-known area horticulturist at the time named Edward A. McIlhenny, and a plaque with the name of each former student and the unknown soldier were set (but not until 1941).

Many of the trees today come from the LSU Burden Center, a 440-acre area dedicated to horticultural and agronomic research, Fellner said. The University purchases the trees for wholesale from the Burden Center, who in turn spend more money on research and trees that will eventually be planted on campus.

The University would be drastically different without the army of live oaks and its comrade trees, Fellner said. He thinks the campus would be dirtier, noisier, hotter and people would be more nervous and drive faster.

“LSU has a feel to it, an ambience. It’s a special place. [Students] are connecting with the trees, and they’re not even putting it into words. You know there are even people hanging hammocks in the trees now?”