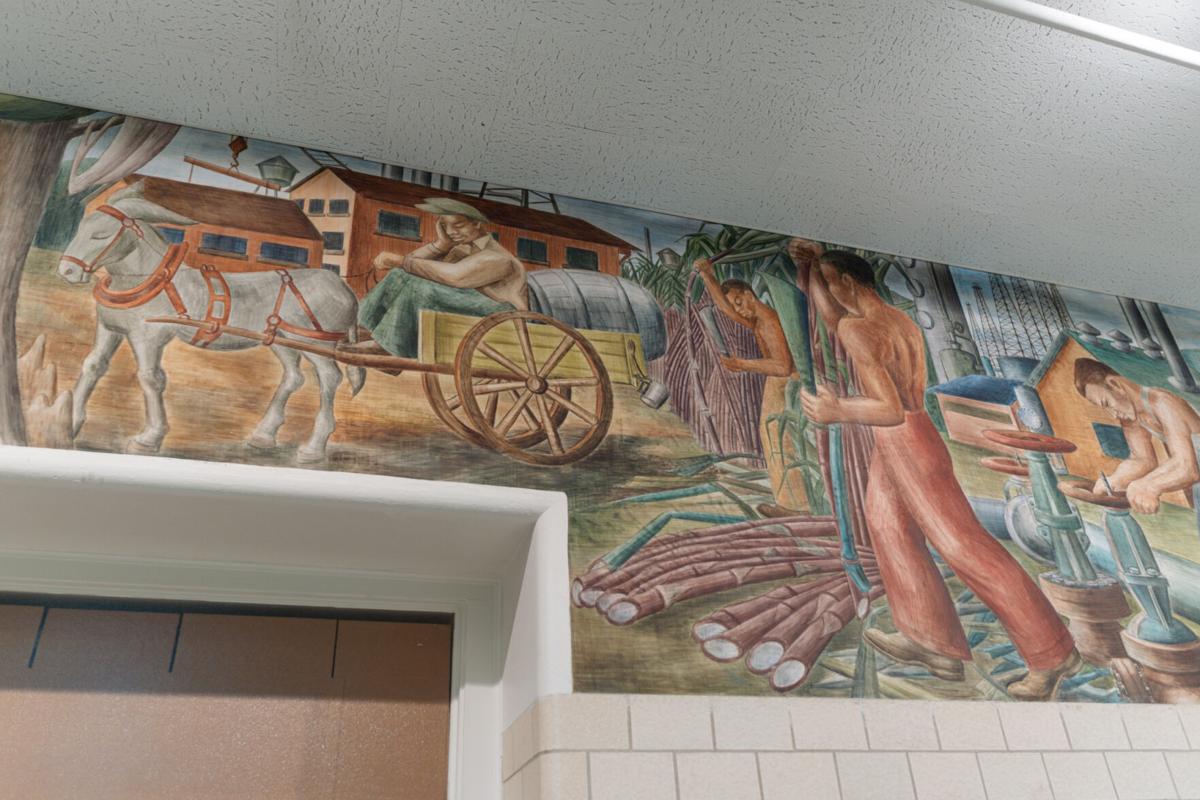 A painting of workers laboring in the sugarcane fields sits alongside a painting of a man sleeping in a wagon as seen in an April 14, 2021 image from within Allen Hall on LSU’s campus. 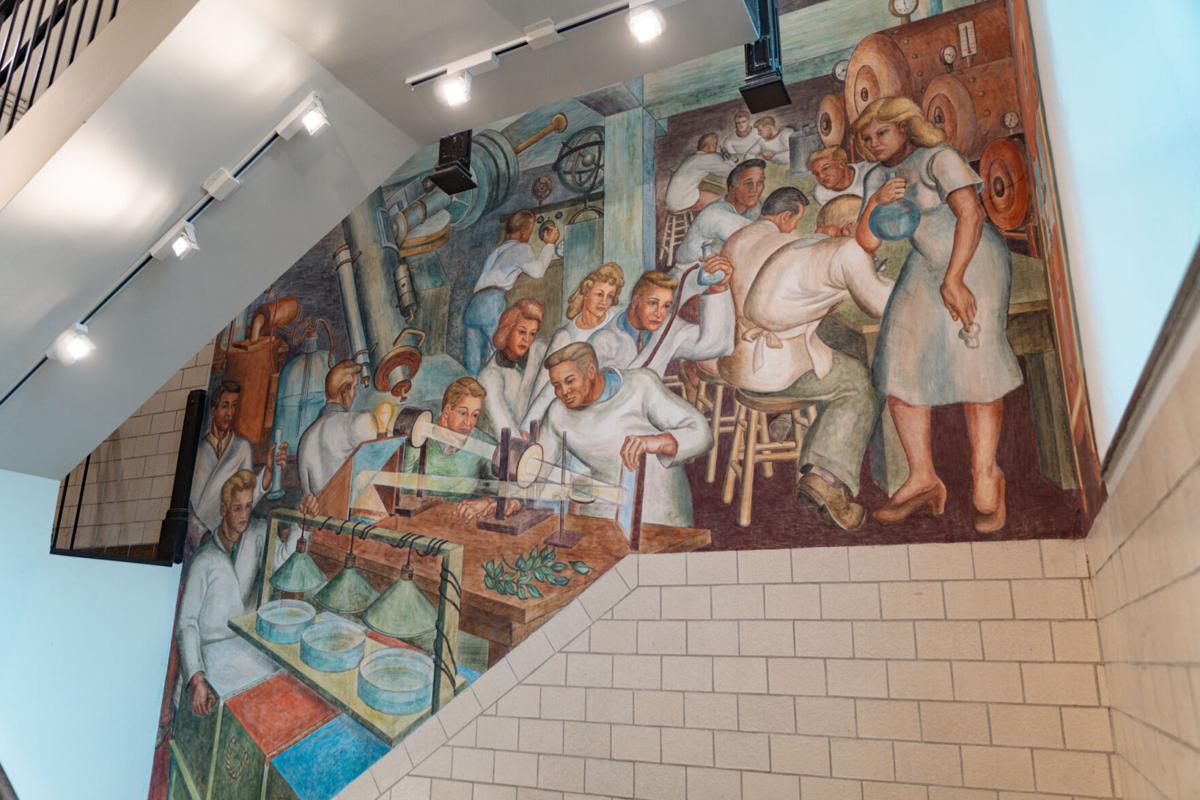 A painting shows many people working in a scientific lab as seen in an April 14, 2021 photo inside LSU’s Allen Hall.

A painting of workers laboring in the sugarcane fields sits alongside a painting of a man sleeping in a wagon as seen in an April 14, 2021 image from within Allen Hall on LSU’s campus.

A painting shows many people working in a scientific lab as seen in an April 14, 2021 photo inside LSU’s Allen Hall.

Members of LSU Student Government want to paint a more representative mural in Allen Hall across from the existing one, which depicts Louisiana industries and academics in the 1930s, but excludes African Americans, only showing them working in manual labor positions.

The first thing you’ll notice when walking into Allen Hall is the large mural lining the interior of the hallway. Those paintings, also called frescos, were completed by LSU art students in the 1930s.

Images of student workers in cane fields chronicle the strides the University made in the ‘20s and ‘30s in sugar research and cultivation. Another section by the staircase shows an all-white team of scientists working in a science lab.

African Americans are shown only working the fields, driving carts, packing cotton and dragging fishnets. LSU did not admit African American students until the 1950s.

An SG team wants to paint a new mural on the blank side of the wall across from the existing ones that would be more representative of Louisiana and the University’s demographics today and include contributions Black students and other historically underrepresented groups have made to the state and the University.

Chemistry and biology senior Xander du Plooy understands why the mural was painted the way it was, but said times have changed since.

“At that time in Louisiana culture and history, the only demographics that would be participating in those fields were white Americans,” du Plooy said. “So it makes sense why it was painted that way. But it needs addressal.”

Du Plooy is a senator for the College of Science and director of development in Student Government. Du Plooy and his team have been working to add a new mural in Allen since last summer.

“The new murals are going to be a testament to the culture and lifestyle of Louisiana and LSU today,” du Plooy said. “The ultimate goal that I proposed to everyone is that every student here at LSU can look up at that mural, find a piece of themselves and feel as equal partners at LSU. We want to show how the culture has changed.”

Du Plooy said the team is also considering adding plaques under the existing murals that would give historical context to the paintings, like that sharecropping and discriminatory laws were still prevalent in Louisiana in the 1930s.

Architecture sophomore and member of SG’s Art and Design Council Francis Dinh drafted the original proposal for renovations to the paintings in June 2020, which he shared with Student Government and University administration. He tweeted that he would have something done about the paintings before he graduates.

Hi there, I’m a current member of Student Goverment at LSU, representing the College of Art and Design. I promise I’ll figure something out about this by the time I graduate and change this painting to something that will inspire unity and excellerence instead of fear and racism

Although Dinh’s original proposal included completely removing the frescos, that option is no longer being explored as it would cost close to $250,000 and would be difficult to get University approval for.

“Because LSU is an educational institution, and the murals are in a building at LSU, the idea of filling the empty space next to the existing murals to continue the narration, we agreed was more important and educational,” Dinh said.

Dinh also said that this is only phase one of the project, which will eventually include making more renovations to Allen Hall.

Progress to get funding has slowed down since the University's recent Title IX scandals, Dinh said.

“The admin didn’t say no, but because they have so many things on hand, they probably won’t be able to process it right now,” Dinh said. “Once the admin has a chance to breathe, we can present that to them.”

In the meantime, Dinh and du Plooy are looking to get as much student feedback as possible on what the new mural should look like.

“This is a student project,” du Plooy said. “We want students to feel that they were integral in the process of creating these murals.”

They want to have the design plans in place by the end of the semester and begin working on the project during the summer.

Dinh said there are three general design ideas right now: one would depict each college at LSU with notable figures from each. Another would depict five notable alumni on each panel, with a procession of students behind them, similar to the Julian White mural in the Art and Design Building. The last idea was to have the paintings depict some of Louisiana’s major problems today, and how students are contributing to solving them.

“This is our first step in hoping to prove that Student Government sees the issues in the murals and is fighting to address them,” Dinh said.

Former SG Vice President Hannah Barrios is also a part of the team and has been talking to University administration about the project.

“I think it is so important that LSU becomes reflective of what our wonderfully diverse campus looks like today, and projects like these help create that,” Barrios said. “Students should feel comfortable and represented in all spaces on campus, and I hope that this addition can achieve that.

Students who have suggestions or ideas about how the new murals can best represent the University student body today can contact du plooy by emailing him at aduplo1@lsu.edu.

Student Government elections can be fiercely competitive, sparking debates about contrasting visions for the future of the University and the …

Scattered thunderstorms in the evening, then mainly cloudy overnight with thunderstorms likely. Low near 70F. Winds S at 10 to 15 mph. Chance of rain 70%.