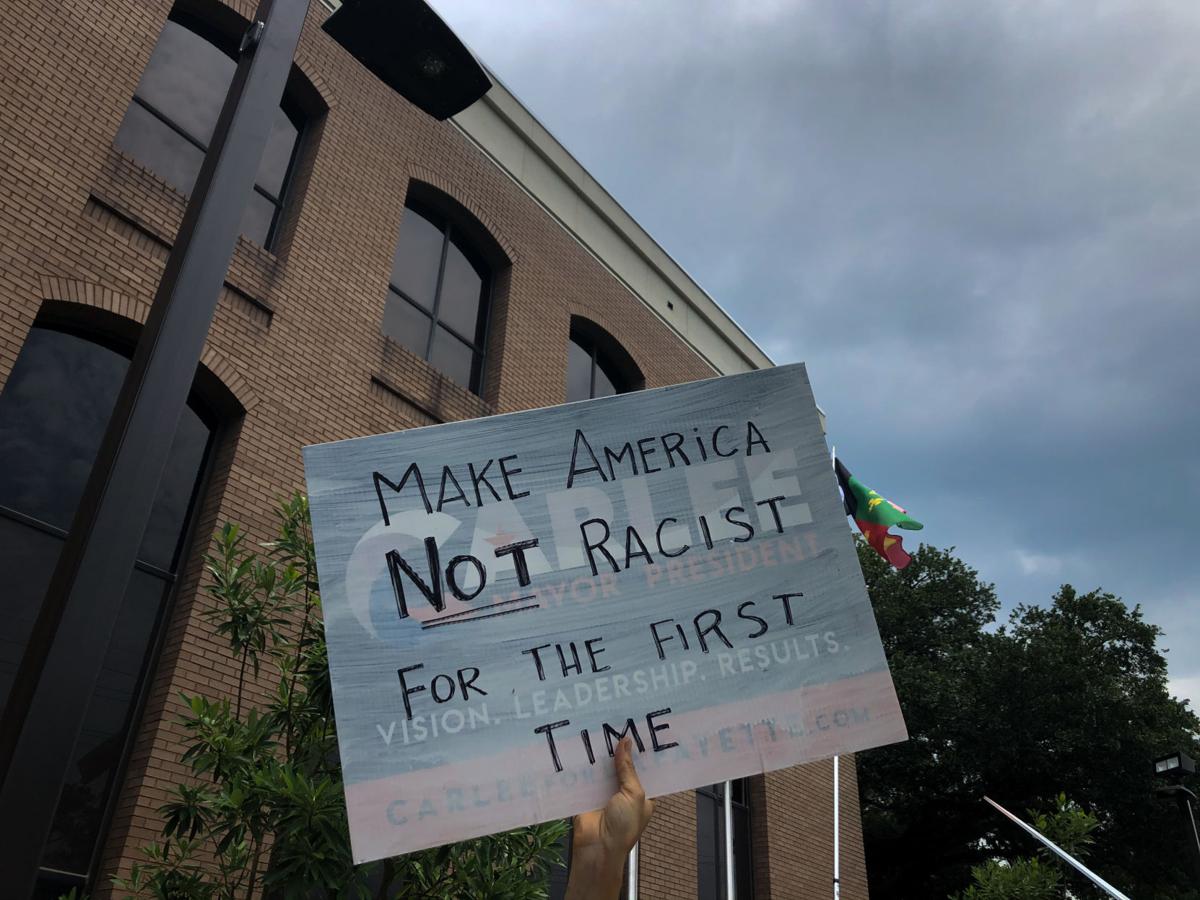 Outside the Lafayette Police Station on University Ave., a protestor holds a sign that reads "Make America not racist for the first time." 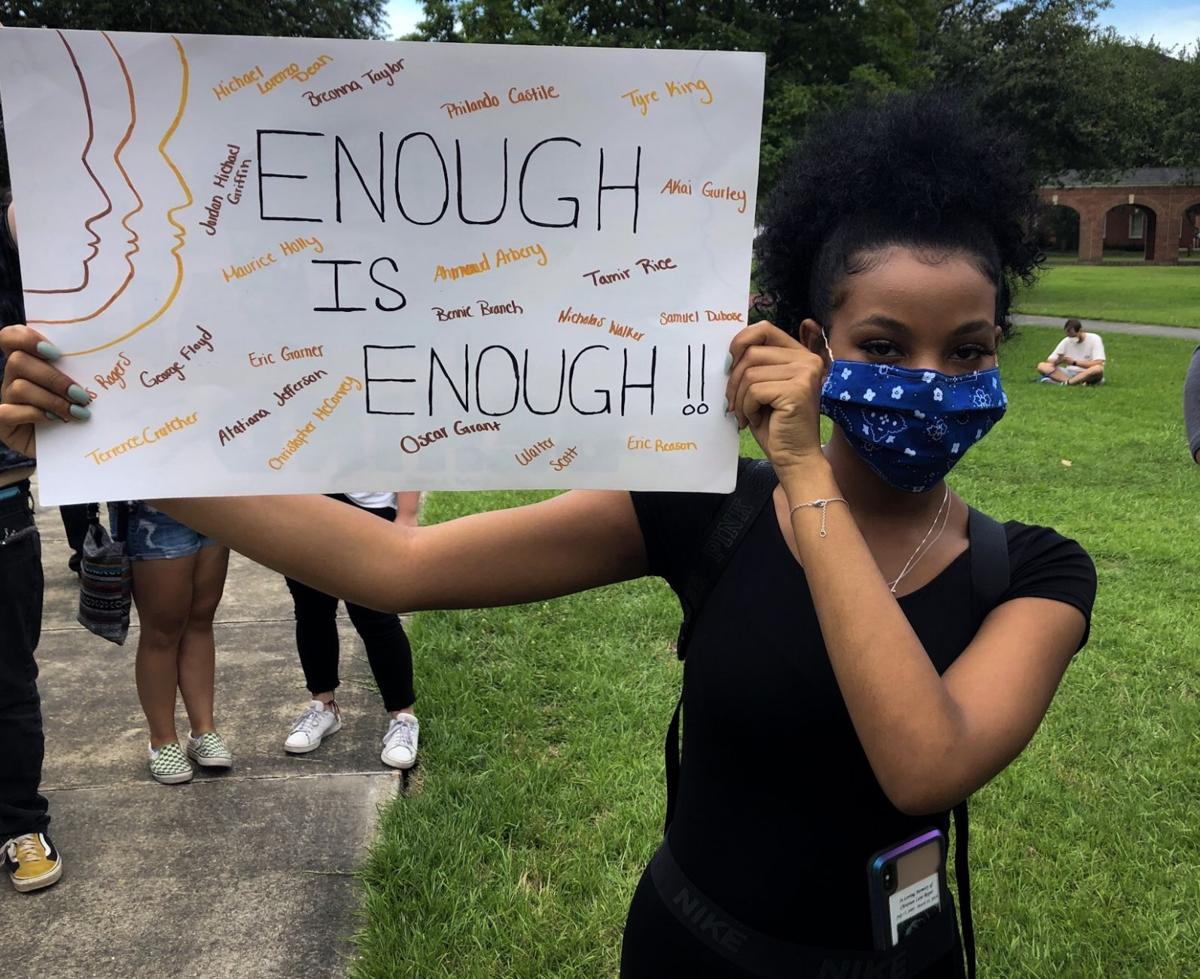 A protestor stands with a sign that reads "Enough is enough!" surrounded by the names of victims of police brutality casualties. 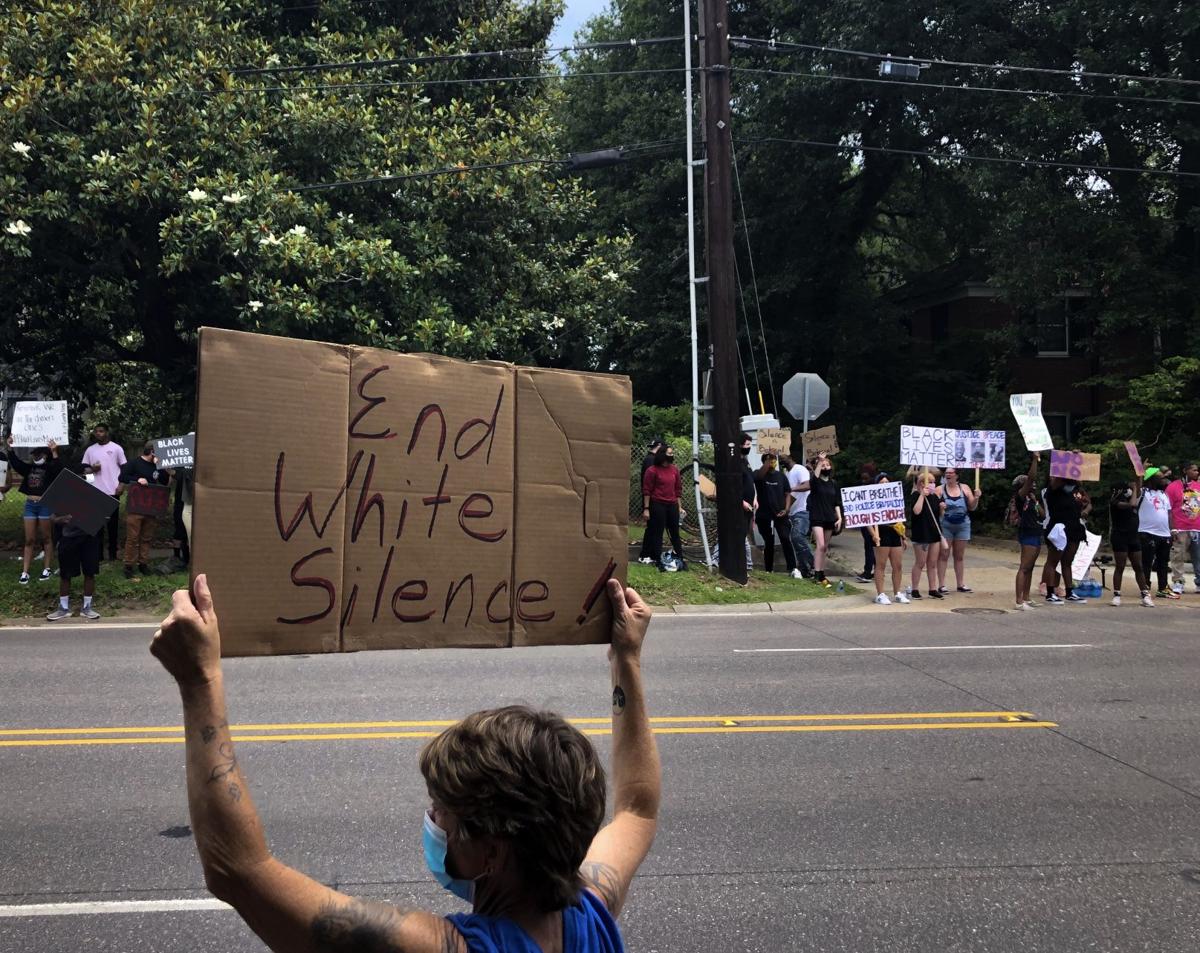 Outside the Lafayette Police Station on University Ave., a protestor holds a sign that reads "Make America not racist for the first time."

A protestor stands with a sign that reads "Enough is enough!" surrounded by the names of victims of police brutality casualties.

“I can’t breathe.” “Black lives matter.” “No justice, no peace.” “Hands up, don’t shoot.” Chants such as these were heard along Johnston St. and University Ave. Sunday as protestors lined the sidewalks and spoke out against police brutality and the murder of George Floyd.

The demonstration was organized through a Facebook group hosted by local organizations like the NAACP. Crowds first gathered at Girard Hall on the campus of the University of Louisiana at Lafayette where members of the host organizations spoke. Then, crowds stood on the sidewalks before marching to the Lafayette Police Station at the end of University Ave.

UL student Mark Mallory helped organize the protest and spoke to the crowd in front of Girard Hall. Mallory said he is there in solidarity with anyone fighting for justice around the world.

“We must be ready to lose the world as we know it and survive together into the new one,” Mallory said.

NAACP Lafayette President Marja Broussard also addressed the crowd. She offered her condolences to the families of those killed by police violence and said she stands with those in Minneapolis.

“The brutal and horrible murders of George Floyd, Breonna Taylor and Ahmaud Arbery has shaken the United States of America,” Broussard said. “Words cannot accurately describe what that feels like.”

Broussard said she was filled with anticipation for the protest that would bring about hope and promise.

After hearing from the speakers, the crowd took to the sidewalks to wave signs and chant to cars driving by.

LSU sophomore and Lafayette native Leah Espinoza attended the protest alongside her mother and sisters. She said the protest felt powerful and emotional, and she appreciated seeing her community speak out in protest.

"I think staying silent is just as bad as staying on the opposite side of the argument," Espinoza said.

Youngsville resident Whitney Harris said he chose to attend the demonstration because he believes America could be better.

Harris described the demonstration as peaceful, yet serious. He said the crowd was eclectic and the atmosphere was one of those demanding change.

Lafayette Mayor-President Josh Guillory stood in the grass in front of Girard Hall behind the protestors. He said he supports the rights of the crowd to peacefully protest and voice their opinions to local leaders.

“None of us here support any police brutality or what happened in Minnesota,” Guillory said.

Interim Lafayette Police Chief Scott Morgan said the crowds were not larger than what they expected, and that about 40 Lafayette police officers were at the protest.

“We’re not trying to be intrusive, so we don’t have a bunch of police officers trying to shut them down,” Morgan said.

“As far as preparation for this, you’ve got to understand there’s only a small percentage of the people that would actually do the stuff that’s going on in Minnesota,” Morgan  said. “We’d really like to think that our community is not filled with that element.”

Guillory said he is proud of the city and parish for the peaceful protest.

Lafayette Chief of Minority Affairs Carlos Harvin stood alongside Guillory during the protest. He encouraged justice and collaboration in working for unity within the country. He said people are here to speak out and exercise their constitutional right to protest.

“The heart of our nation is broken today,” Harvin said, “And so we’re praying for the healing of the United States-- that we can heal from this tragedy and that what caused Mr. Floyd to die, that that would never happen again.”

Trey Mamou of Sunset described the atmosphere of the protest as “amazing.”  He said he was glad the community is speaking out against a nationwide problem and hopes that this protest will bring change.

“If we make our voice known, change is inevitable,” Mamou said. “It has to happen.”

The temperature reached in the upper 80s during the rally, but crowds still marched and stood along the streets. Many passed around waters and granola bars. Lafayette resident Kaitlyn Stelly stood under a tree holding a sign that read “free water and snacks to all protestors.”

“It’s just such a beautiful thing to see everyone in your city unified together,” Stelly said. “I know it’ll never bring justice to those people who have fallen, but hopefully this will make a change somewhere and that’s why we’re doing it.”

The protest originated through a Facebook event, hosted by the Lafayette parish NAACP, Lafayette Tenants’ Coalition, University of Louisiana at Lafayette Student Action & Organizing Committee, Sunder Press and Move the Mindset. The hosts of the Facebook group asked protestors to wear masks and encouraged signs and social distancing.

“We are gathering to demand an end to police brutality in Lafayette Parish and the U.S.,” the original post read.