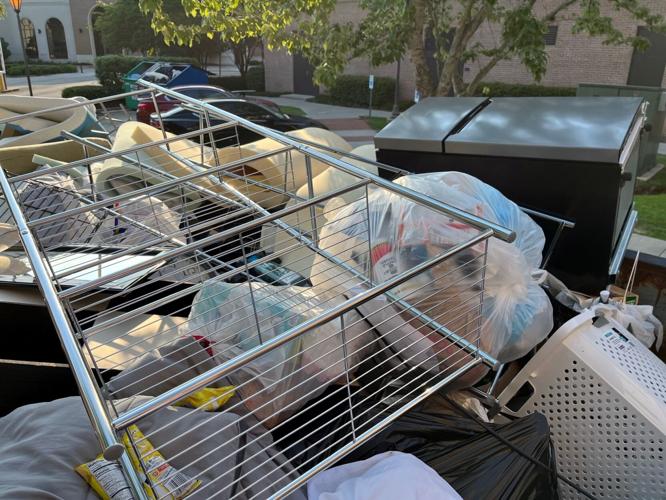 Multiple mattress pads, furniture items and a mini fridge can be seen atop the "waste" of the South Hall's dumpster on Saturday, May 14, 2022. 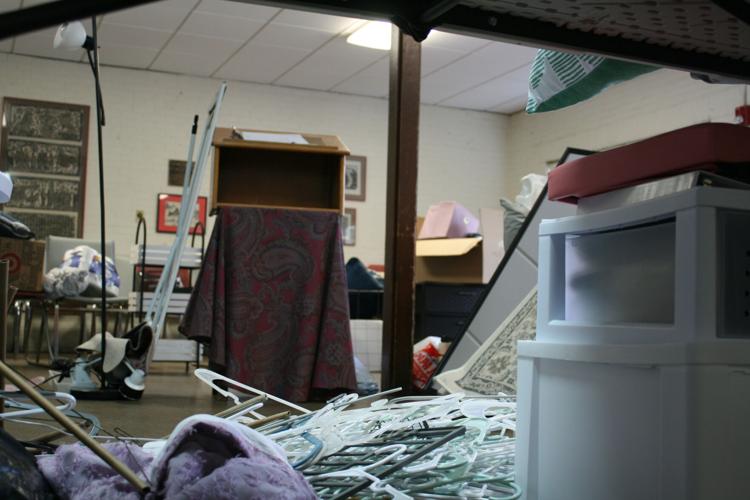 Items donated to the International Cultural Center's Swap Shop gathered on Monday, May 16, 2022.

Multiple mattress pads, furniture items and a mini fridge can be seen atop the "waste" of the South Hall's dumpster on Saturday, May 14, 2022.

Items donated to the International Cultural Center's Swap Shop gathered on Monday, May 16, 2022.

There’s an overwhelming amount of waste generated by the migration of freshman living in dorms to living elsewhere. Tragically, much of the waste could be avoided.

Temporary dumpsters were filled to the brim with appliances, bedding, furniture, food, and clothing in the days leading up to final move-out. The conditions of the items thrown away were usually decent, typically only having about two semesters' wear.

It can be inferred that items are usually thrown away because they are too big for transport, they can’t be seen as usable beyond the dorm-living context, or the item is genuinely trash. The amount of usable and reusable items that are thrown away is truly astounding; a mini fridge holding a resident’s snack might be thrown over the edge of a dumpster only a few hours later.

In many cases, items thrown away are more damaged in the disposal process than their intended use.

Other universities have programs implemented to try and circumvent the widespread waste of items that could otherwise find purpose. According to their website, Harvard offers reuse stations across campus for nearly anything a dorm resident would get rid of, with the exception of food.

The waste of bedding is particularly regrettable because most students will never use their twin XL sheets or mattress pads again. Assuming that 3,000 of the 8,960 students living on campus donated their bed sheets and mattress pads collectively valued at $150 (a generous rounding down for the sake of example), roughly $450,000 worth of bedding alone could be saved.

If properly treated and donated to shelters, this could have monumental statewide impacts.

The International Cultural Center is the only major on-campus organization offering a reuse program called the “Swap Shop.” Director of International Student Engagement at the ICC, Laura Dean, said the Swap Shop started as a project that could help incoming international students who don’t have support systems upon arrival at LSU.

She eventually reached out to Residential Life and Greek chapters in an effort to gather more items, support and awareness for the Swap Shop.

She said that the Swap Shop was a success and that they currently have a surplus of items for international students.

“The problem is space,” Dean said. “We’re limited to just this building [the International Cultural Center] and a few rooms. While we wanted to expand and make this something room for much more significant items, like bed frames, we just don’t have the capacity.”

She anticipates the project will only expand and that work can be done with other organizations, like ResLife, to streamline a more flexible and capacious system.

“Clearly LSU is not the only school with this issue where students in residential halls throw away items that are in really good condition and could be used for other purposes,” Dean said. “That’s why we wanted to start this at the ICC.”

Students and professors have taken notice to the issue on Twitter and with any amount of luck, a coalition effort from Student Government and ResLife could make an organized, campus wide approach possible

Associate Director of Communications at ResLife, Catherine David, said that before the pandemic, ResLife had a program called “Give and Geaux” that would benefit charities with student donations.

David endorses the ICC’s Swap Shop and hopes ResLife can develop a partnership with them for next year’s move out.

“We certainly don’t like seeing piles of waste at the dumpsters. We encourage folks to consider how much they need to bring at move-in, how they can repurpose or sell items they no longer need or pass down items to friends coming to school next year,” David said.

The students in the Twitter thread hold the same sentiment, only they aspire to see it on a refined campus wide scale.

Despite the lack of an organized, campus wide system for donations, students are still responsible for filling the now overflowing dumpsters with items that could easily be donated to charity shops or shelters.

Not every item is worth salvaging and most students didn’t have malicious intent when they threw away something that could’ve been reused.

But with a proper system and a reinvigorated mindset, moving out could mean lots of possibilities for recycling instead of a spike in waste.

Partial cloudiness early, with scattered showers and thunderstorms during the afternoon. High 91F. Winds SSW at 5 to 10 mph. Chance of rain 50%.

Partial cloudiness early, with scattered showers and thunderstorms in the afternoon. High 93F. Winds SSW at 5 to 10 mph. Chance of rain 50%.