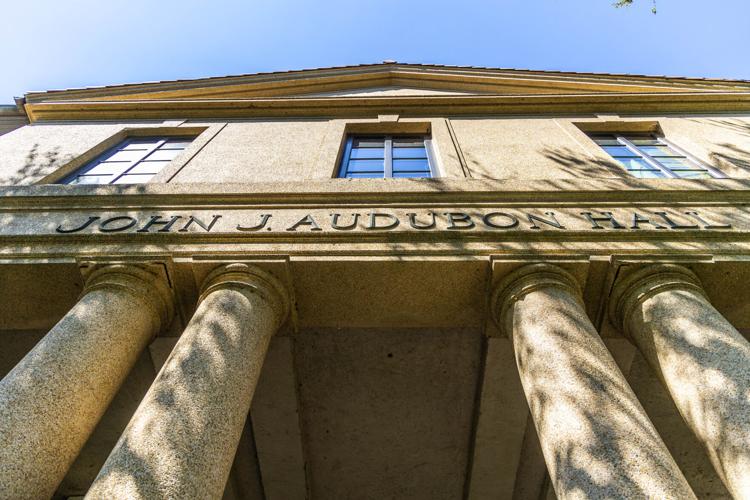 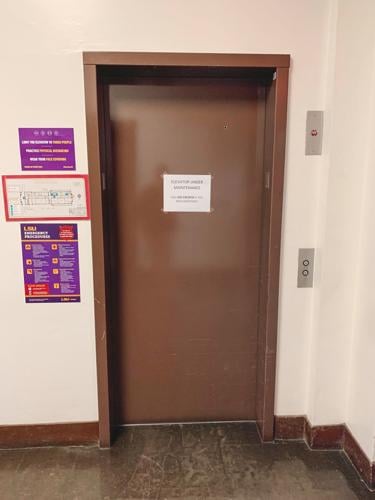 An elevator tacked with a sign labeled "ELEVATOR UNDER MAINTENANCE" sits stationary on Monday, Sept. 19, 2022, inside LSU’s Audubon Hall in Baton Rouge, La.

Walking down the halls of nearly any building in LSU’s Quad is tantamount to visiting a museum.

Constructed in the 1920s and 30s, the buildings look and feel as if they're a part of a bygone era, a time in which necessities like elevators and air conditioning were viewed as luxuries.

One doesn’t need to look any further than the third floor of Audubon Hall. The building’s safety and integrity have been declining for at least the last few months, according to a psychology graduate student who spoke on the condition of anonymity in fear of retaliation from employers.

She said that before this summer, Audubon had what seemed to be a good problem: its air conditioning was working.

But it was working too well. In fact, it was so cold on the third floor that graduate students and workers were forced to use blankets and space heaters to keep warm, the grad student said.

Without access to a thermostat, students went to facility services, who, perhaps misunderstanding the intent of the many work orders sent, failed to fix the problem. This issue went on for months.

Over the summer, however, third-floor offices and workspaces developed the opposite, and arguably worse, problem: the air conditioner stopped functioning properly, caused by a leak in the HVAC system, turning once icy air into muggy summer heat.

Due to limited summer hours, it took a while for the problem to be noticed, during which time visible mold began to develop along the walls of the third floor.

It wasn’t until the semester started that faculty and students realized what was going on. On Aug. 26, psychology department chair Emily Elliot sent out a department-wide email announcing the closure of graduate student labs and workspaces on the third floor of Audubon. The grad student shared this email with The Reveille.

“As many of you know,” Elliot said, “we’ve been having struggles with the HVAC on the third floor. We also have a separate incident of water damage in rooms 305/306, which is ongoing, and is adding moisture to the floor in general. We are closing the third floor until we can restore the air conditioning and do a thorough inspection.”

There was enough fungus from the accumulated water to make the air hazardous. Elliot continued, “Some rooms are worse than others but our understanding is that mold is airborne and given the visual presence of it, we suspect there is more that we cannot see.”

Elliot went on to offer temporary workspaces to any student who needed it, but most have found it easier to work in the library – a difficulty, given the sensitive, confidential information they handle – or the Psychological Services Center, which lacks the expensive assessment kits and research materials kept in the Audubon labs.

Thankfully, the health hazard has just been resolved, and students are now back working in their previous offices.

But that hasn’t stopped frustration from building among psychology teaching and graduate assistants, who see this episode as yet another example of LSU’s lack of support and care for graduate students across campus.

There are two main issues: First, an uncompetitive and unlivable assistantship stipend – around $15,000 annually on a nine-month contract, even though psychology students are expected to work for the school virtually year-round, including summers, by conducting research.

Second, dilapidated, embarrassing work conditions not only produce a potentially hazardous work environment, but also may prevent top graduate students from choosing LSU over other schools. Peeling paint, cracks in the walls, damaged stairwells – or worse – don’t offer an air of welcome to prospective students.

Take, for example, the elevator in Audubon, which has been out of service since July: Why would a disabled prospective graduate student choose a school that doesn’t prioritize keeping their buildings accessible? Furthermore, there are several buildings in the Quad, such as Himes Hall, that don’t have a single elevator.

If a prospective graduate student who's disabled wanted to get a doctorate degree in history at LSU, for example, they would have to have an office in another building, separate from all the other graduate assistants. This isn't exactly a welcoming feature, especially when considering that grad school is challenging enough without immediately facing social and professional isolation.

It seems as if LSU is following the letter of the law in these health, safety and maintenance issues. According to Tammy Millican, LSU's executive director of facility and property oversight, the university has solved the leaking and mold problems in Audubon, making sure to include the Environmental Health and Safety staff in their efforts; they are waiting on new parts for the broken elevator, and they plan to add elevators in the coming years to the buildings currently lacking them to be in accordance with an Americans with Disabilities Act transition plan.

However, this is the issue. LSU seems to be following the letter of the law only to avoid litigation, instead of fairly taking care of the most overworked and underpaid workers on campus — graduate students and assistants. They’re not being proactive, nor are they seeking to solve deeply seeded issues at their root. Instead, they're only addressing symptoms, pulling weeds as they appear in the garden instead of putting out fertilizer.

Where does most of the blame for these issues lie? It’s difficult to say. The fault probably doesn’t lie with any single department or employee. It’s not exclusively with facility services, which is bogged down in a bureaucracy that inhibits them from efficiently completing work orders. The same likely goes for different administrative or academic heads, who are similarly hampered by an enormous amount of legal and financial red tape. Nor is it exclusively the problem of LSU President William Tate IV or Provost Roy Haggerty, who haven’t been at the university long enough to undo the long-lasting damage done by past management.

It's also important to remember that LSU’s deferred maintenance budget is controlled by the state legislature, which, on average, gives the school $2-3 million annually for campus upkeep, a measly sum compared to the almost $604 million worth of repairs needed in aging buildings across campus.

Regardless, though, graduate students desperately want to see swift action by LSU and the state legislature to address these urgent needs. They want to see their university and employer advocate for them – not just for the athletics programs or the academic departments that bring in money or television revenue – and they want to see their state officials step up and give the school the resources it needs.

Whether this will happen is a dubious prospect. Nonetheless, LSU and the state of Louisiana have a responsibility to take care of some of their most undervalued students and workers.

Benjamin Haines is a 24-year-old history graduate student from Shreveport.

Opinion: Learn to find confidence in solitude, especially in college

In high school, everyone makes you feel like you have to spend every second of the day with …