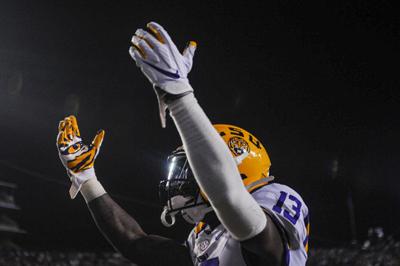 Jontre Kirklin’s name has been tossed around. He had been recruited from high school as a dual-threat quarterback and switched over to defense when asked to. He was a strict special-teams player the past few years, with little to no time to use his athleticism to boost the Tiger offense. Just recently, Kirklin’s name had been a candidate to move back over to cornerback to shallow the position group’s depth, especially in the wake of the defense giving up over 600 yards of passing in the team’s loss to Mississippi State last week.

During the Tigers’ win against Vanderbilt, he showed why head coach Ed Orgeron said the team would only do that if it absolutely had to.

Kirklin caught three passes for 65 yards in LSU’s win over Vanderbilt, putting him second on the team behind star receiver Terrace Marshall Jr. Two of his three catches were for touchdowns. The first was an innocent wide receiver screen that developed quickly as Kirklin used his speed and balance to run all the way to the endzone for six points. Kirklin’s second touchdown came off the most fun play of the night, a Myles Brennan flea flicker for a 29-yard electrifying score.

'It's what we need to do:' Emery, rushing attack fuel dominant LSU victory over Vanderbilt

“Jontre, along with our whole offense and receiving core, played a heck of a game,” Brennan said. “Jontre was getting open, he was catching the ball, he was getting yards after the catch, and that’s what it’s all about.”

In Kirklin’s first three years, he had only caught three passes for 80 yards. The senior has been a staple on the LSU roster for years, but he finally showed the leadership and playmaking ability that every member of the program has emphasized for quite some time.

“Jontre’s been a leader for us,” Orgeron said. “I’ve been waiting for him to have a breakout game. A guy that’s worked very hard, I’m so proud of Jontre. He was one of the team captains this week. He had a great attitude all week.”

Editorial Board: LSU must commit to transparency in COVID-19 response, address unanswered questions

The Tigers defeated the Commodores 41-7, putting the team back on track to have a successful season. Brennan threw for 337 yards with 23 completions on 37 attempts and four touchdowns. Eleven different receivers participated in LSU’s lethal passing attack, supplemented by a stellar running game from John Emery Jr. Emery ran for 103 yards and a touchdown.

“I’m proud of this football team and this coaching staff,” Orgeron said. “Had grit this week, came back, did work all week, guys wanting to get better, leadership on this football team. I thought we played a complete game tonight. There were some mistakes, but our guys fought.”

With Kirklin and company contributing to the offense’s volatile attack, this was exactly the rebound the Tigers were looking for. The culmination of leaders taking responsibility and working hard to amend their mistakes took place in an impressive fashion Saturday night.

If you asked any player if Jontre Kirklin was one of those leaders, a resounding “yes” would have been their answer. But Kirklin showed everyone else that person tonight. Finally, his name has stopped getting thrown around and started being respected.

An inside look at Coach Ed Orgeron's contract: the highest-paid state employee in Louisiana

Private air travel, a social club membership and a $5 million life insurance premium. These are a few of the perks of being Louisiana’s highes…