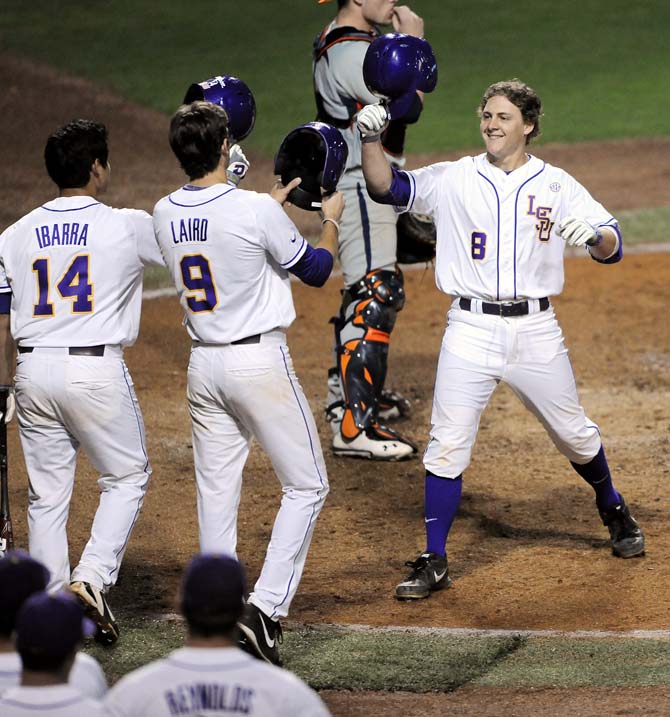 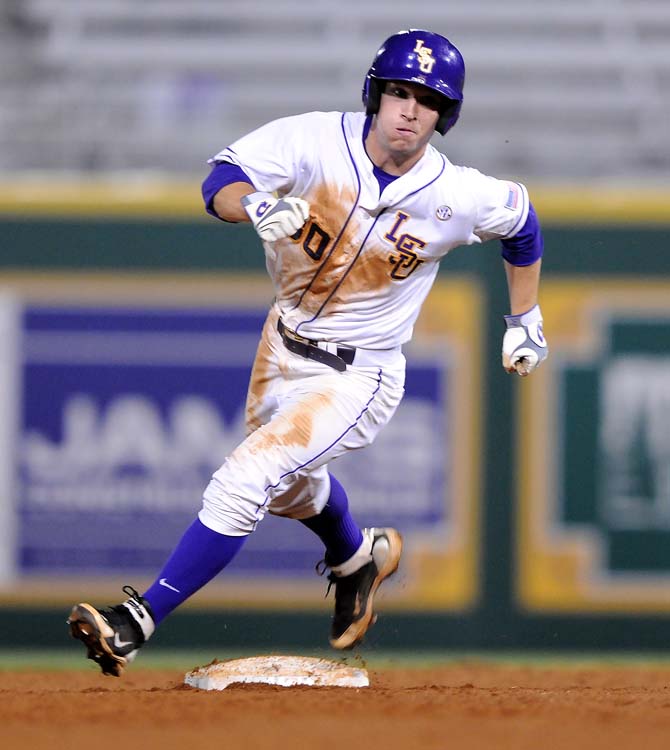 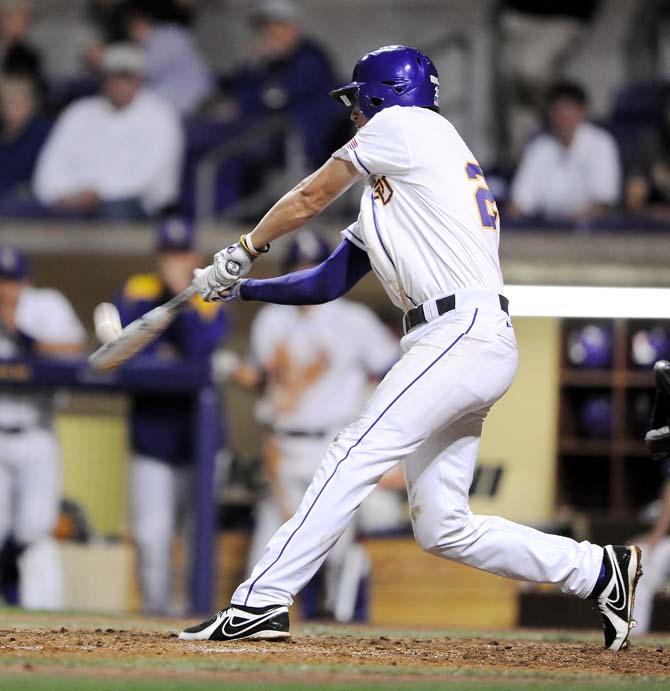 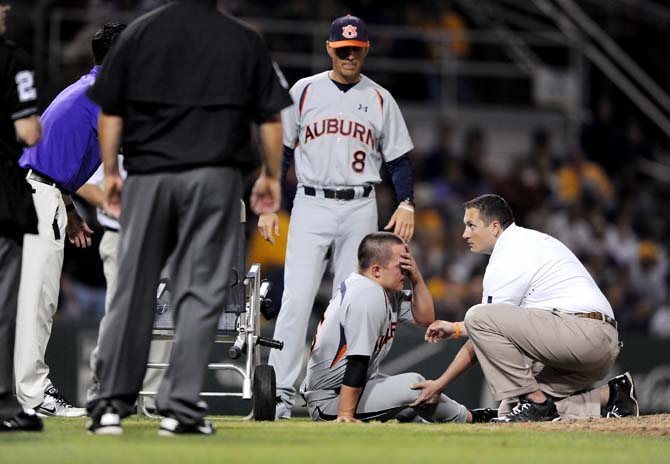 Auburn junior pitcher Jay Wade (15) gets medical attention after suffering an injury in the fifth inning Friday, March 22, 2013 during the Tigers' 9-4 victory against Auburn in Alex Box Stadium. The injury prevented him from pitching for the remainder of the game. 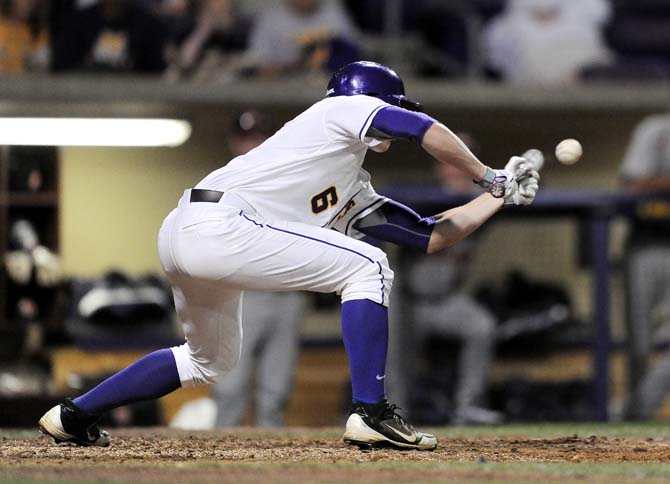 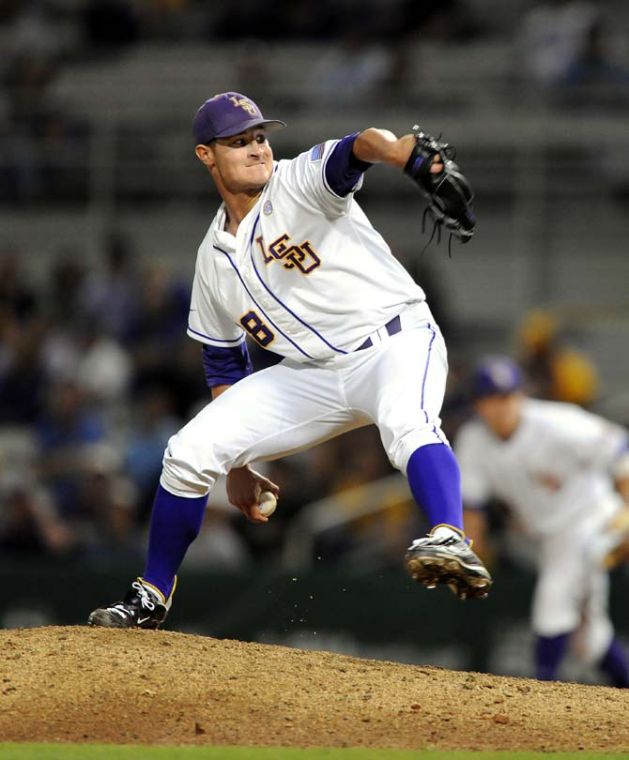 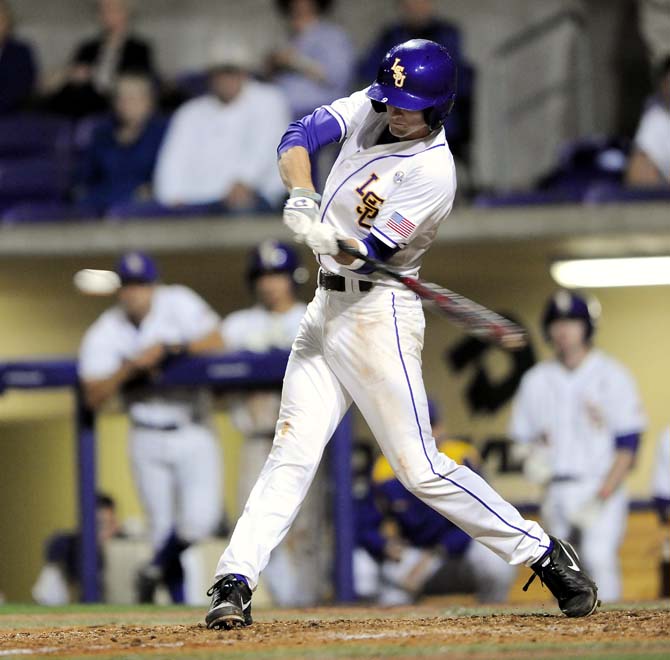 Auburn junior pitcher Jay Wade (15) gets medical attention after suffering an injury in the fifth inning Friday, March 22, 2013 during the Tigers' 9-4 victory against Auburn in Alex Box Stadium. The injury prevented him from pitching for the remainder of the game.

LSU senior left fielder Raph Rhymes cranked his first home run of the season while sophomore righty Aaron Nola struck out nine through 6 2/3 innings on the mound to power the Tigers to a series opening win against Auburn in Alex Box Stadium, 9-4.

On a balmy March evening conducive for hitters, both teams flexed their muscles at the plate, combining for 22 hits with only one error throughout the contest.

With his team already threatening in the bottom of the first after consecutive singles from freshmen Mark Laird and Alex Bregman, Rhymes lifted a mammoth three-run homer to left field off Auburn starter Daniel Koger, giving LSU (20-2, 3-1 Southeastern Conference) a lead it would never relinquish.

"I knew if we could come out to a lead early it would be big for our team," Rhymes said. "I was trying to put a good swing on the ball and it got out of here."

Senior first baseman Garrett Cooper tacked on an RBI double in the third inning to get Auburn within 3-2, taking advantage of one of Nola's many missed spots.

"I made a couple of bad pitches," Nola said. "I left the ball up in the zone and Auburn made me pay for it."

After Koger walked Laird to begin the home half of the third inning, LSU senior first baseman Mason Katz dispatched of his tenth homer of the season, in virtually the same spot as Rhymes', to push the LSU lead back to 5-2 and chase Koger after just 3 1/3 innings.

Junior third baseman Christian Ibarra continued the assault on Auburn pitching in the sixth, slamming an RBI single up the middle to drive in Bregman and Rhymes and give his team a much more comfortable 7-2 advantage.

"I took the first pitch fastball … I looked at [LSU coach Paul Mainieri] and he wanted to kill me," Ibarra said with a smile. "I went up there and tried to battle and get the job done."

Ibarra's liner injured Auburn reliever Jay Wade as he tried to avoid being hit in the head by the comebacker. Wade crumpled to the field as his ankle became entangled under him and was carted off the field after a minimal delay.

Wade was taken to the emergency room where X-rays were taken of his right ankle, but no further update was given of his condition.

After LSU relievers Brent Bonvillain and Nick Rumbelow combined to walk three in the eighth inning, giving up a run and loading the bases, Mainieri turned to senior righty Joey Bourgeois who slammed the door on a rally, inducing a groundout and fly out to preserve the LSU lead.

While the Bonvillain and Rumbelow's performances irked Mainieri, he was pleased with the team's resolve at the plate against a quality SEC opponent.

"Auburn has SEC-caliber athletes. I knew they wouldn't quit," Mainieri said. "We'll take the victory … we did some good things tonight and were able to secure the victory."

Almost nonexistent in previous seasons, LSU baseball has added a new weapon to its arsenal – speed.

It didn’t take long for the No. 7 LSU baseball squad to jump on Auburn in the series finale Sunday as the Tigers from Baton Rouge completed th…