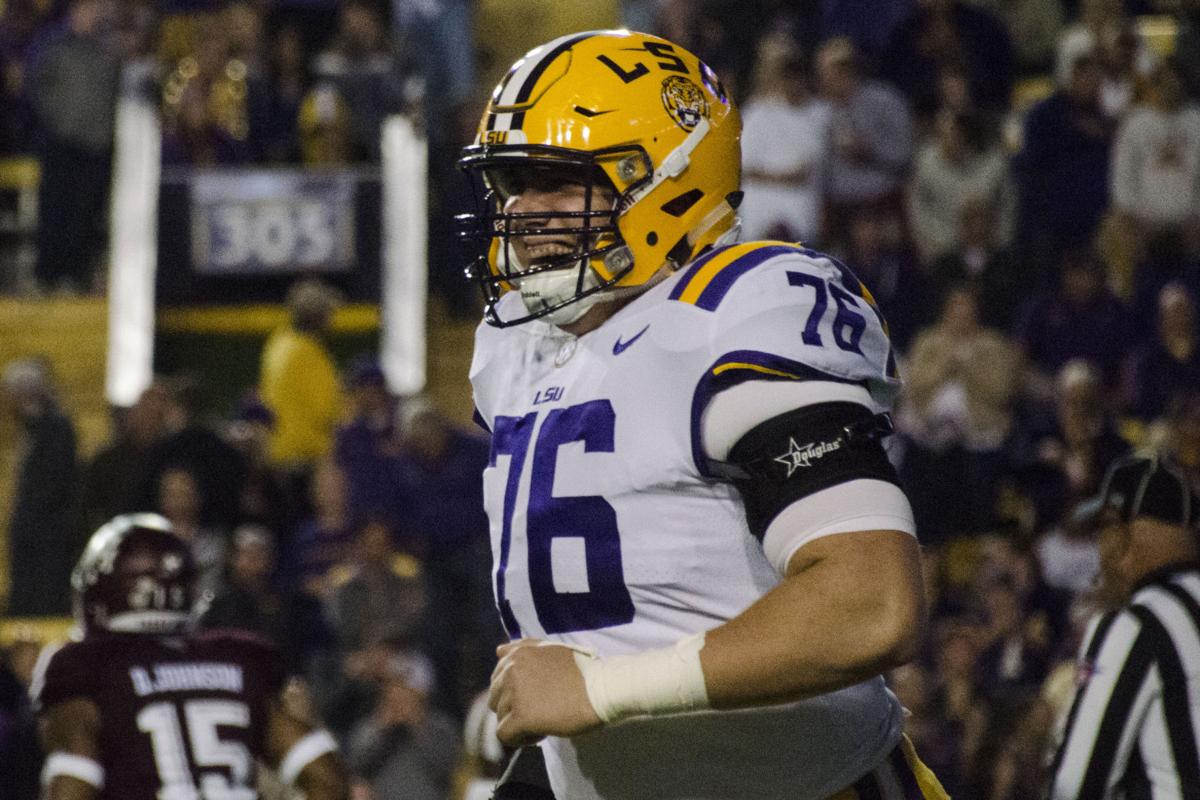 LSU offensive lineman Austin Deculus (76) cheers after a successful play during the Tigers' 45-21 lead against Texas A&M on Saturday, Nov. 25, 2017, in Tiger Stadium. 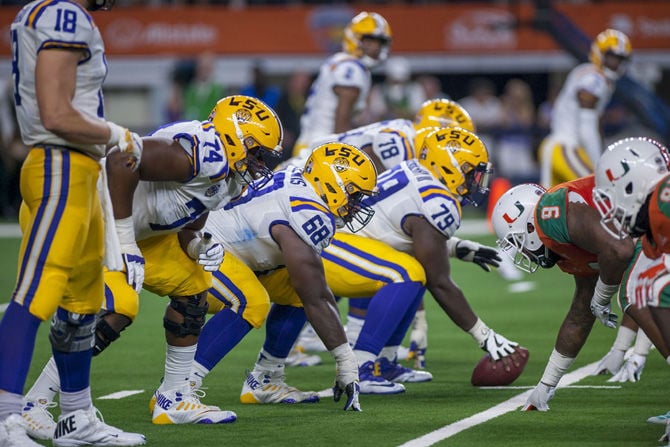 The LSU offensive line prepares for a play during the Tigers' 33-17 victory over Miami in the AdvoCare Classic on Sunday, Sept. 2, 2018 at AT&T Stadium in Arlington, Texas.

After a National Championship winning season last year resulted in LSU losing a record-tying 14 players to the 2020 NFL Draft, the Tigers were left this season without much depth and it showed on the field. Next season, LSU looks to sport many veterans as a number of players have opted to continue their reign in the purple and gold.

Senior right tackle Austin Deculus is the fourth LSU offensive lineman to announce that he is staying in Baton Rouge for another season.

Deculus made the announcement public on social media on Monday night posting a letter addressed to Tiger Nation. “After much consideration and prayer,” he wrote, “I have decided that it is in my best interest to pursue my fifth and final year as an LSU Tiger.”

Deculus is now the fourth starting offensive linesmen to forgo declaring for the 2021 NFL Draft. Although the offensive line under the leadership of offensive line coach James Cregg underperformed this season, it is expecting to be vital piece of the LSU offense next season.

“Goes to show our whole offensive line is coming back,” Head Coach Ed Orgeron said in a recent interview with ESPN. “They should be the strength of our football team next year.”

With just a few scholarships remaining for the Tigers 2021 recruiting cycle, Orgeron did not shy away from the importance of the offensive line, saying that they are holding one or more of those spots for Graduate or JUCO transfers.

This offensive line was the recipient of the 2019 Joe Moore Award – the most outstanding offensive line – and won a national championship. Making an almost unison decision to regroup and keep improving next year proves that the chemistry is there and could lead way to another award-winning year.

“This year will be nothing short of rewarding and victorious,” Deculus said in his letter. “Without a shadow of a doubt, I believe that a year from now the Joe Moore Award will be back where it belongs in Baton Rouge.”

Following the advancements made by the NCAA to grant eligibility to athletes whose seasons were upended last year due to the pandemic, an extra year of eligibility will be granted, allowing for seniors to play an additional year. While it is still early in the new year, the pandemic still presents a viable threat to the safety of returning to a ‘normal’ 2021 season following a truncated season.

Head Coach Orgeron and the new members of the coaching staff will have tremendous amounts of talent returning to the team next season as they prepare to welcome the 2021 recruiting class which ESPN ranked No. 3 in the SEC for 2021.