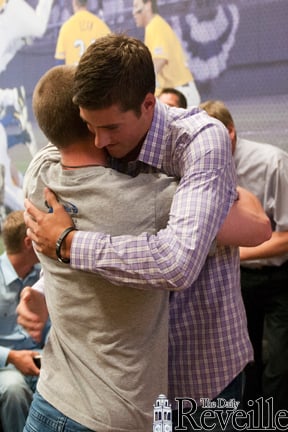 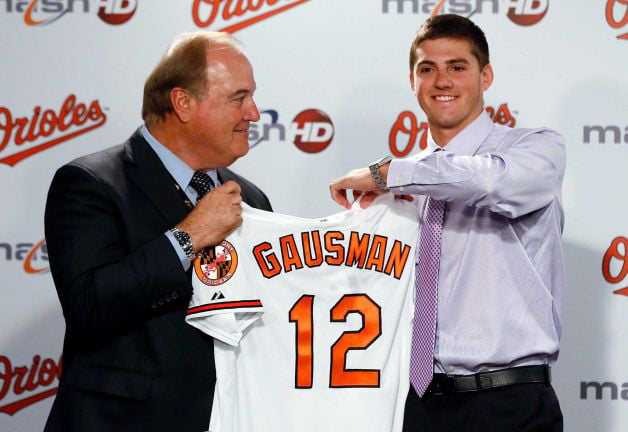 Sophomore pitcher Kevin Gausman celebrates with family, friends and teammates after hearing his name called in the 2012 MLB Draft. The Baltimore Orioles selected Gausman with the fourth overall pick.

Sophomore pitcher Kevin Gausman celebrates with family, friends and teammates after hearing his name called in the 2012 MLB Draft. The Baltimore Orioles selected Gausman with the fourth overall pick.

On July 13, former LSU pitcher Kevin Gausman signed his Major League contract, forgoing his senior season and becoming a member of the Baltimore Orioles organization, but it nearly didn’t happen.

Now he’s back in Baton Rouge for a short time before returning to Sarasota, Fla., for offseason training.

Gausman said he signed his contract at 4:59 p.m., seconds before the MLB’s 5 p.m. deadline, and thus began the First-Team All-American’s first look at the “The Show.”

Despite his faster-than-usual rise up the ranks, Gausman said he wasn’t surprised to finish the season in Double-A.

“My goal was to end up in Double-A and maybe get one or two starts,” he said. “Once you get to Double-A, it’s one call away. That was something I kind of put in the back of my mind that I wanted to push myself to get there by the end of the year.”

While the Orioles made their first run to the playoffs since 1997, Gausman made a remarkable run up through the organization’s minor league teams.

After just two starts in Low-A, the Orioles promoted Gausman to the High-A Frederick Keys. Three starts later, Gausman struck out four batters in three scoreless innings against the Salem Red Sox. Soon after, Gausman was promoted to Double-A, where his season finally came to an end.

Just two months separated from playing on the same LSU team as many of his friends, Gausman said he had a lot to get used to in his first shot at professional baseball.

“It was a lot different coming from playing with some of your best friends and then going to play with guys that don’t necessarily care about who you are as a person,” Gausman said. “They’re your competition.”

In addition to a different environment in the clubhouse, Gausman had to grow accustomed to a new setting playing in the minor leagues.

“You realize how amazing LSU is when you have 10,000 fans at a college come watch you play,” Gausman said. “I got up to Double-A and we were in the playoffs and we had 100 people at every game.”

But Gausman didn’t have to look far for advice as he took the next step in his baseball career. LSU pitching coach Alan Dunn, who was the Orioles’ minor league pitching coordinator before coming to LSU, helped Gausman with the process.

“He told me a lot about the organization as a whole and the things they focus on and the people in the organization I would be dealing with,” Gausman said. “When I told him I was going [to big league camp during Spring Training], he told me to make sure to keep your head down and don’t say too much unless someone says something to you. It was kind of funny.”

Gausman said he hopes to start next season back in Double-A, but without the restriction of the strict three-innings-per-game limit the organization placed on him to prevent excessive wear and tear on his arm.

“Close to 200 innings for a starter, that’s usually what the big leaguers come in around,” Gausman said. “I think I can handle that many innings so I’m hoping next year they kind of just let me go.”

A mix of clouds and sun during the morning will give way to cloudy skies this afternoon. A stray shower or thunderstorm is possible. High 86F. Winds S at 10 to 20 mph.