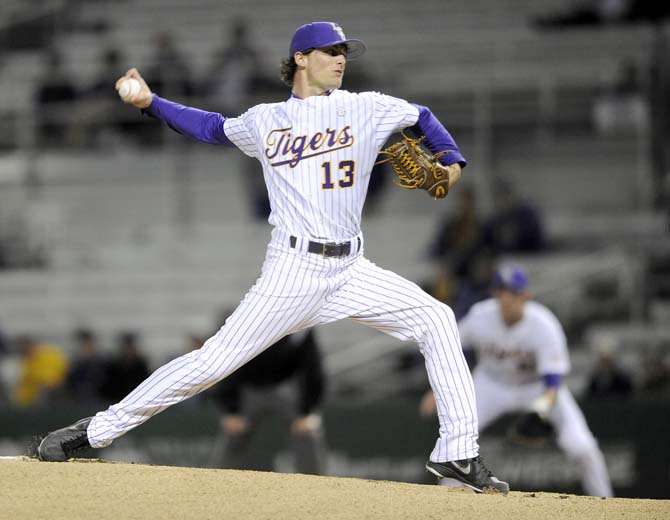 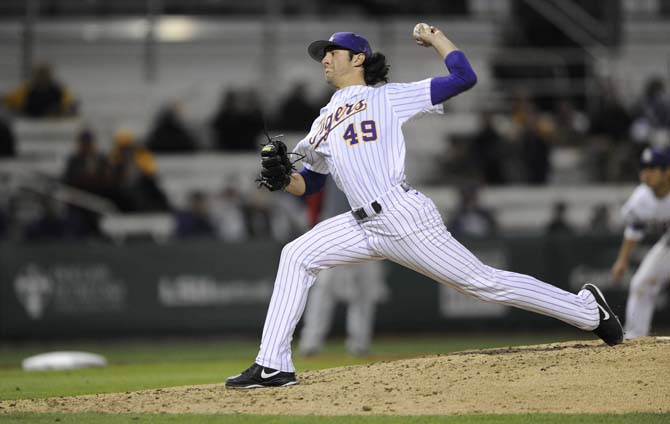 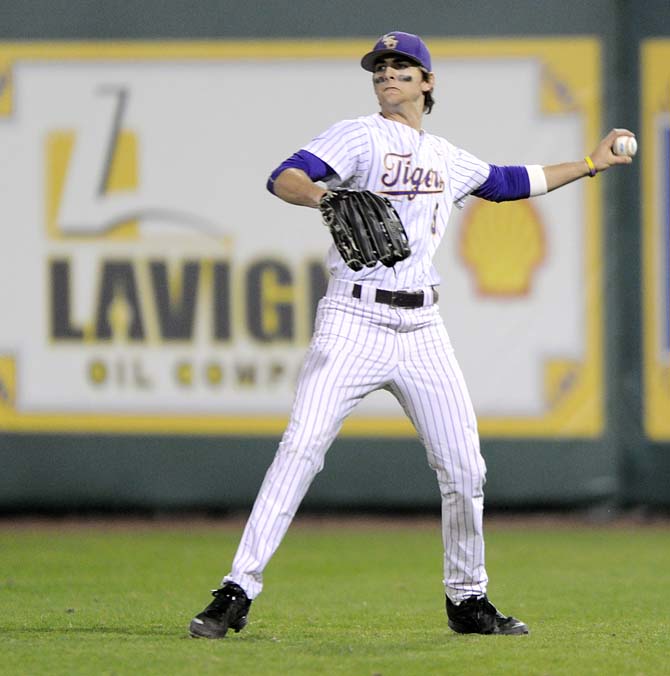 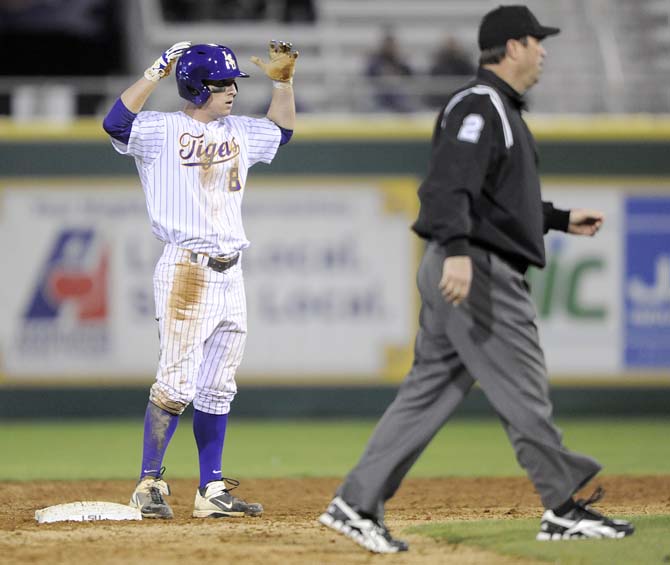 LSU sophomore infielder Alex Bregman (8) expresses disbelief after he is incorrectly declared out by an umpire Wednesday, March 5, 2014 during the Tigers' 8-1 victory against Sacred Heart in Alex Box Stadium. 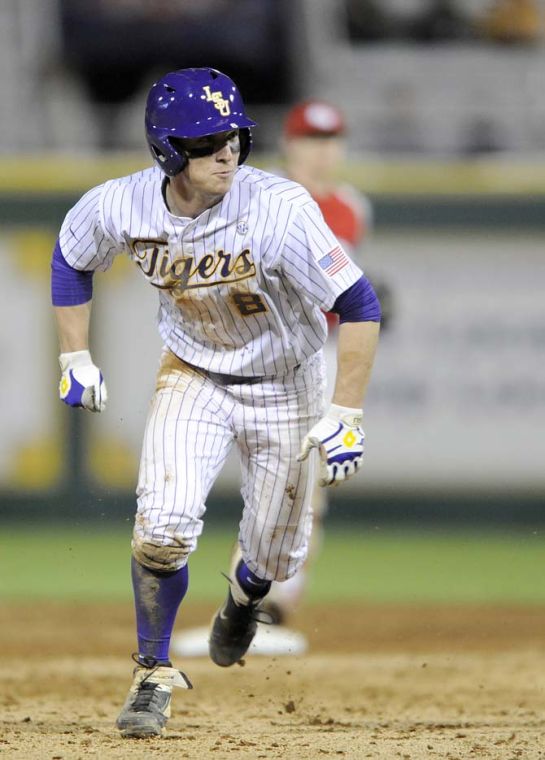 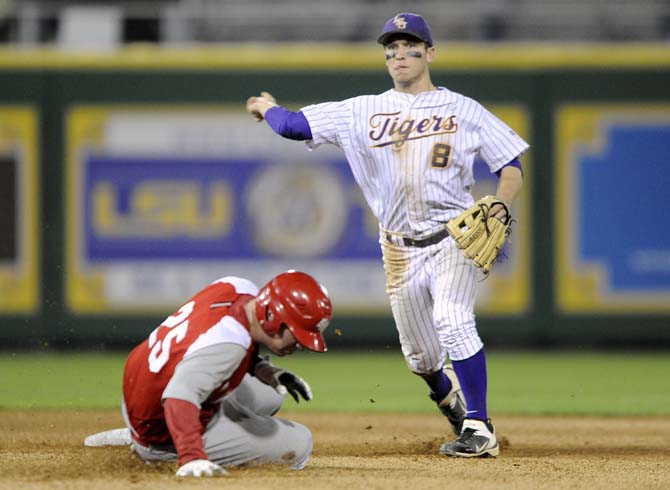 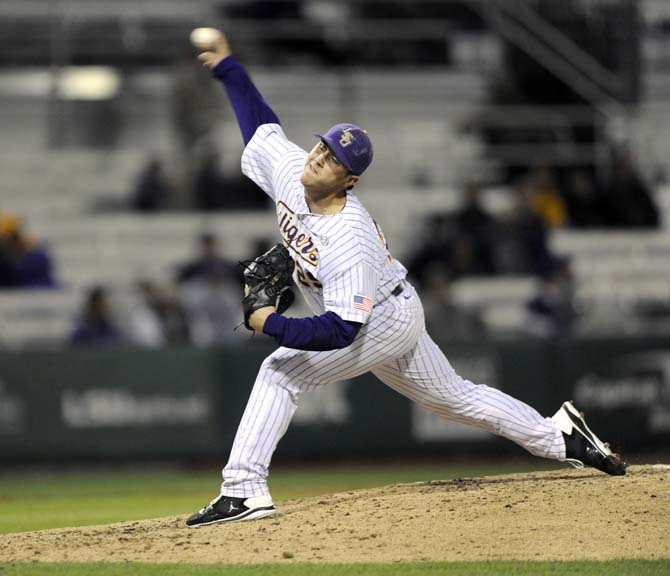 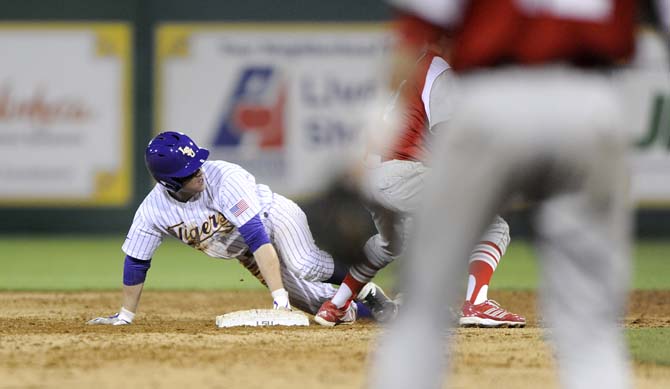 LSU sophomore infielder Alex Bregman (8) glances up after sliding into second base Wednesday, March 5, 2014 during the Tigers' 8-1 victory against Sacred Heart in Alex Box Stadium. 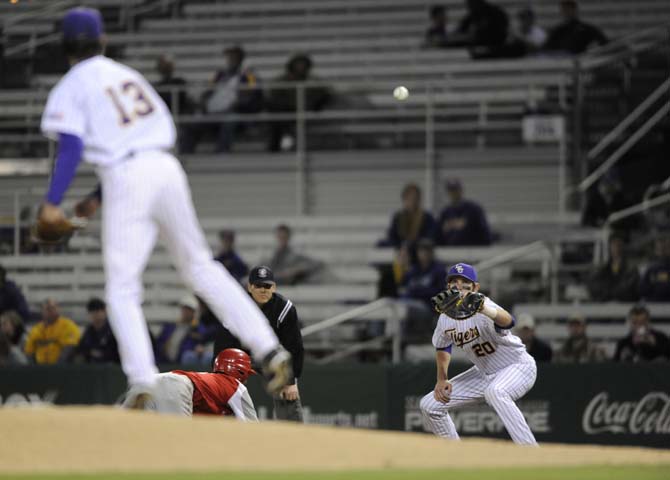 LSU sophomore infielder Alex Bregman (8) expresses disbelief after he is incorrectly declared out by an umpire Wednesday, March 5, 2014 during the Tigers' 8-1 victory against Sacred Heart in Alex Box Stadium.

LSU sophomore infielder Alex Bregman (8) glances up after sliding into second base Wednesday, March 5, 2014 during the Tigers' 8-1 victory against Sacred Heart in Alex Box Stadium.

LSU coach Paul Mainieri had to turn to two junior college transfers in the first of LSU’s two midweek games to defeat Sacred Heart in an 8-1 victory on Wednesday in Alex Box Stadium.

He decided to use two juniors the program acquired during the offseason from LSU-Eunice, right-hander Brady Domangue and southpaw Zac Person.

Domangue entered Wednesday’s contest with a whopping 10.12 ERA. He had only thrown 2 2/3 innings before his start against Sacred Heart, allowing two hits, three runs and three walks in his three previous appearances.

Domangue started off rocky Wednesday night, allowing a one-out home run in the top of the first, but he bounced back to toss a final line of three innings of one-run baseball, allowing three hits and striking out two batters.

“My main thing was to go back out there and throw up zeroes from here on out,” Domangue said. “I got that first inning out of the way, and whenever I went out there and threw up those two [scoreless innings] back-to-back, I was fired up. That was a big confidence boost right there.”

He was credited with his first win as a Tiger, bringing his record to 1-0 and reducing his ERA to 6.35.

“I thought Brady threw the ball exceptionally well,” Mainieri said. “His command of his fastball was really good, and he threw some really good breaking balls. I thought he looked like a different man out there.”

Mainieri used Person following Domangue’s performance, and the southpaw started strong with a clean top of the fourth.

Person’s fifth inning ended up in a bases-loaded jam, but the Eunice, La., native picked up a strikeout to end the frame. He finished after two scoreless innings, surrendering two hits and striking out three.

Seniors Nate Fury and Kurt McCune and junior Henri Faucheux combined for four innings of work without giving up a run, to close out the Tigers’ victory.

Offensively, LSU did most of its damage early and often.

With the bases loaded and one out in the bottom of the second inning, freshman second baseman Kramer Robertson hit a ground ball through the left side of the infield to tie the game at 1-1.

Sophomore catcher Chris Chinea followed with a two-RBI double to right field, and senior left fielder Sean McMullen added a sacrifice fly to give the Tigers a three-run lead.

Chinea had only three hits in 25 at-bats before Wednesday, so Mainieri spoke with him both in his office and around the LSU batting cages in the days leading up to Wednesday’s game.

“I said, ‘You need to loosen up and let it rip. You’re a big strong man,’” Mainieri said. “So he did today, and I was real happy for him.”

One inning later, junior designated hitter Kade Scivicque put down a squeeze bunt to add another run, and sophomore center fielder Andrew Stevenson hit an RBI single to left field to give the Tigers a 6-1 lead.

The Tigers will try to carry this momentum to today’s game against Northwestern State, which was previously scheduled for Tuesday but had to be postponed because of wintry weather conditions.

The freshman’s first road start could be pivotal to Mainieri’s final decision about establishing a weekend rotation heading into Southeastern Conference play.

“Everything that we’ve done up to this point will be factored into it all, but I said all along that I wouldn’t be closer to deciding that until after [the Northwestern game],” Mainieri said. “I know who’s going to pitch Friday night, but [LSU pitching coach] Alan Dunn and I will talk on the bus after the game.”

Cloudy in the morning, then off and on rain showers during the afternoon hours. High 56F. Winds light and variable. Chance of rain 80%.

Cloudy with periods of rain. Potential for heavy rainfall. Low 43F. Winds ENE at 5 to 10 mph. Chance of rain 100%. Rainfall may reach one inch.

Some clouds early will give way to generally clear conditions overnight. Low 29F. Winds N at 5 to 10 mph.