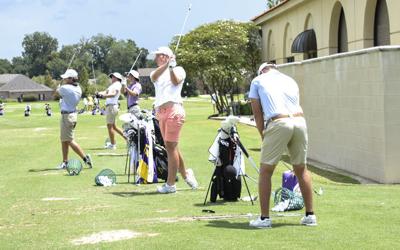 The college golf season is only seven days away.

Both the men’s and women’s golf teams will be preparing to compete next week in Arkansas for the Blessings Invitational. While the teams are still in Baton Rouge, coaches will finalize their rosters and ensure safety for their upcoming trips.

Though the SEC and LSU have listed golf as an acceptable sport to be played during the pandemic, there has been an emphasis on safety and precautions from the side of the men’s golf team. Golf is a special sport in that, like boxing or tennis, it is an individual sport. Not only is golf special because it is an individual sport, the entirety of the sport is held outside. For these same reasons, Chuck Winstead, director and head coach, believes it is safe to compete this season while mitigating the spread of the coronavirus.

“We are in a really good position because golf is an outdoor sport,” he said. “I have no concern [about the lack of safety in place for the upcoming season]. Golf has been held around the world, the U.S. Amateur event and PGA tournaments every week around the country.”

The United States Golf Association was one of the earliest sports to resume play when the virus broke out in March. The USGA has taken the appropriate measures to ensure that the players’ health has been at the forefront of their decisions. Each tournament that the USGA has hosted this year has not shown any significant influx of positive cases surrounding the players and their communities.

'You have to trust in everything you have done;' Junior golfer Chris Woollam is ready for challenges ahead

This success is traced down to two critical implementations: screening players’ health prior to competition and prohibiting spectators from entering tournament sites. These are two main reasons for why golf has had a successful return to normalcy, but overall, it is the commitment by the players, staff and community to ensure everyone is safe and healthy.

Following this model, LSU has also centered its priorities around the health of the players.

“We have a very little positivity rate, and we have healthy players,” Winstead said. “All meetings and practices that are usually held indoor have been moved outdoors. Everything we are doing is great and easy to ensure community safety.”

Winstead had recently changed the way that practices operate. Instead of having two players share one cart, he insisted that each player will walk and will remain six feet apart from the other. This form of practice can prove to be beneficial for future seasons as well. All collegiate and professional tournaments require all players to walk the entirety of the match.

In addition to reshaping the processes, the golf teams will participate in randomized COVID-19 testing. Each player was tested when he received his physical. Winstead is confident that his group is in great shape and will continue to outperform his expectations this year.

This fall season, the men’s team welcomed a freshman from Spain, Hugo Aguilar Puertes. The Spainard has already earned an all-clad reputation in the golf world, winning abroad and posting several low scores. Winstead believes that his role as a coach is not to place expectations on his performance, but rather to encourage and support him to play his best.

Seniors Philip Barbaree and Trey Winstead and junior Garrett Barber are all returning this year and will provide examples for this young team. Winstead said that all three of these players are at the top of their competition and they are all capable of a breakout year. He also added that the team’s future is looking very bright, claiming that LSU might have the deepest roster among SEC teams.

The golf team will have to decide its top-five players to travel to Arkansas next week. The team will be holding qualifications in practice to make this decision. Winstead added that the team’s roster strength is also a major contribution to creating competition within the team for the five travel spots, and it will bring out the best in each player.

“I am thrilled to be a part of a conference and a university that is allowed to play,” Winstead said. “I am quite happy to compete.”

He is also happy that the first tournament will have all three days covered by the Golf Channel.

In golf, the lowest number wins. This season, the team with the lowest number of positive cases will win. Teams will have to be healthy and cautious this upcoming season. Coaching has always been a critical element for success, and this season, coaches will play a larger impact than ever before.

Lindblad impresses, men tied for fourth after Blessings Invitational round one

The college golf season is now in full swing, with the first round of the Blessings Invitational complete.

Partly cloudy in the morning. Thunderstorms developing later in the day. High 83F. Winds ENE at 5 to 10 mph. Chance of rain 70%.

A few clouds from time to time. Low 54F. Winds light and variable.