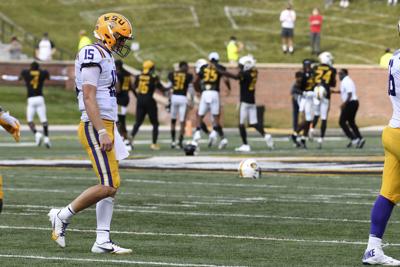 There was a lot of hype surrounding Myles Brennan and the LSU football team before the season kicked off, and when a team gets hyped up, fans are disappointed when their expectations aren’t met. Such was the case for an LSU team that has fallen out of the rankings after two terrible losses to unranked Mississippi State and Missouri.

Fans also tend to point fingers when their team disappoints, and when the sport is football, those fingers are often pointed at one person in particular: the quarterback.

After the legendary 2019-2020 season that Joe ‘Burreaux’ had, it isn’t difficult to imagine that fans were somehow expecting a similar season from recent first-time starter, Brennan. Despite only playing garbage-time minutes last season, Brennan was ranked third in the Preseason Heisman Rankings, fueling the hype that he had already acquired.

It’s safe to say LSU’s season opener wasn’t what anyone was expecting.

Brennan started the season with a mediocre performance in which he threw two interceptions and was sacked seven times. And that mediocrity was amplified when the team suffered a nauseating loss to heavy underdogs, Mississippi State.

It’s understandable to look at Brennan’s performance and think ‘that wasn’t amazing,’ but what’s not understandable is blaming him for the loss. LSU as a whole, with the exception of Terrace Marshall Jr., was awful against Mississippi State.

When a quarterback is starting for the first time, the team should help him out. The team certainly helped Joe Burrow out in his first start against the Tigers. Have you seen his stats from that game?

Joe Burrow threw for a whopping 140 yards on a 45.8% completion rate in his opening start against No. 8 Miami. And what was the result of that game?

The Tigers won 33-17. Miami scored two touchdowns in the 4th quarter to make it look closer than it was. LSU gave up half the yards this year’s team gave up against Mississippi State, and Nick Brossette rushed for 15 fewer yards than Burrow passed for and two touchdowns to carry Burrow’s poor passing performance.

While the offense has changed vastly since then, and Brennan has had a lot more time to learn it, it’s clear that Brennan has had a better start to his junior season than Burrow did. It’s too early to fully compare their junior seasons, so I’ll finish with this: Burrow threw for a third of the yards that Brennan did against Mississippi State, and the Tigers gave up 41 fewer points in a 19-3 win.

Brennan’s numbers have been great. He’s improved with every game, completing over 60% of his passes against Vanderbilt and Missouri and only amassing one interception.

Even with more of the blame shifting from Brennan to Bo Pelini and the defense, there are still a fair amount of people who don’t believe that Brennan is the guy. But come next year, they’ll be praising him like this never happened.

In a court of law, when a plaintiff brings a case against a defendant, the defendant hires a defense attorney to argue for him, protect him ag…