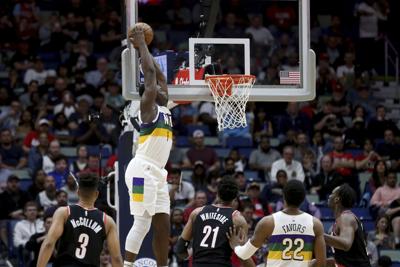 On the morning of Aug. 15, the New Orleans Pelicans relieved Alvin Gentry of his head coaching duties.

After five seasons as head coach for the team, Gentry accounted for a lowly 175-225 record. The dismissal came at no surprise to most, due to the Pelicans’ shortcomings in the playoffs. Pelicans management stated that they are scouting 30 possible prospects to take over the team. So the question remains: What does the future hold for this young, talented team?

NBA hall of famer Jason Kidd and championship-winning coach Tyronn Lue have been mentioned as front runners for the coaching job. Kidd had an outstanding career on the court, and still hasn’t quite put his mark on the league yet as a coach. Kidd’s playing style was very similar to the current form of the New Orleans team: fast-paced and in your face. And yes, with Kidd at the helm, the Pelicans might as well trademark that as their motto for the foreseeable future.

Lue is a very worthy contender for the job as well. Midway through the 2015-2016 season, Lue replaced David Blatt as head coach for the Cleveland Cavaliers. Lue was able to lead his team to an NBA title, despite coming in as a replacement coach. That championship is a testament to Lue’s versatility as a leader. Both Kidd and Lue are currently assistant coaches on two playoff teams, the Los Angeles Lakers and Los Angeles Clippers, respectively.

The Pelicans organization has made it known that they are not shy to bring a college coach onto the professional scene. Will Wade, LSU men’s basketball coach, was among one of those names mentioned. Wade is 37 years old and could gel well with the young Pelicans team. Wade and the Tigers had a good chance to make some noise in March Madness, sitting at number two in the Southeastern Conference prior to the COVID-19 pandemic. An upside to bringing in a college coach is that he is familiar with furthering underdeveloped playing styles. In Wade’s seven years of coaching, he boasts a credible 158-77 overall record.

The Pelicans have not shot down the idea of an internal hire just yet. Assistant coaches Chris Finch and Fred Vinson could be potential candidates for the position. Both coaches have years of experience in the organization and would be the safest hires. But is that what the New Orleans Pelicans need? A safe hire? I think not.

This team needs to be flipped on its head and revitalized. After logging countless losing seasons, the time for safe hires has passed. Pelicans Executive Vice President David Griffin made it clear that the process of finding a new head coach will not be a quick one. The team is searching for the leader of this franchise.

Kidd is the fiery spark that this young team needs to propel them to the top. Kidd has been coaching under Frank Vogel for the 2019-2020 season while coaching the likes of LeBron James and Anthony Davis. Coaching those types of top-tier players is what makes inexperienced coaches into veteran leaders. With Kidd as the pilot of the Pelicans plane, they will surely fly high without Gentry.

Pelicans fans, hop on the coaching carousel. This is shaping up to be a wild ride.

Column: Hunger will be the difference maker for the Pelicans

The New Orleans Pelicans journey to find a coach ended with the hiring of Stan Van Gundy. He plans to take a mediocre New Orleans team to the …