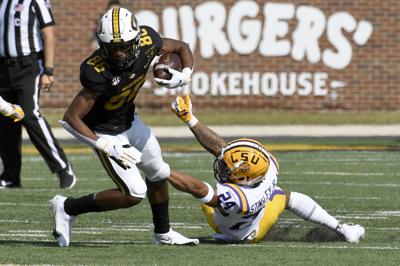 In a court of law, when a plaintiff brings a case against a defendant, the defendant hires a defense attorney to argue for him, protect him against calls for justice from the prosecuting lawyer, and ultimately bring the jury and judge to believe in his innocence or ability to be responsible.

This is not a court of law.

The persons of interest, namely Myles Brennan and Terrace Marshall Jr., being asked to speak for the atrocious performances by the LSU defense should not be the defense attorneys of their teammates on the other side of the ball. This responsibility rests on the shoulders of the coaches and players who have given up 623 yards to Mississippi State and 586 yards to Missouri in the first three weeks of the season.

It starts with Ed Orgeron, who has had to sit on the post-game podium and take the fault for his defense’s mistakes. He has shown the accountability Tiger fans are asking for and continues to do so, but he has sheltered his players from criticism.

It is reasonable to not place the full blame on the players. In both losses, the LSU scheme has put players out of the play before they realize it. JaCoby Stevens had mentioned in previous weeks the players’ inability to pass along crossing routes in man coverage, for example. As a result, receivers keep finding themselves in space to make plays, giving Mississippi State quarterback KJ Costello and Missouri quarterback Connor Bazelak 10.4 and 11.9 yards per attempt averages respectively. While there have been missed tackles and some inexcusable blown assignments, the scheme continues to put the players in bad positions.

There is a complete lack of understanding from the coaches of how to use the players’ strengths to succeed. There have been no adjustments made to suggest that they do understand.

If the players are not to blame, this leaves the other coaches liable.

Which begs the question: Where is Bo Pelini?

Brennan and Marshall were the players called on to face the media. Brennan threw at a 29-48 clip, for 430 yards and four touchdowns. Marshall was on the receiving end of 11 of those passes, for 235 yards and three of the touchdowns. They more than carried their load.

But you would not know it from their selfless responses.

Why are they being sent to answer for the awful defense put on the field by Pelini? Why isn’t the veteran coach, who has held head coaching positions at Nebraska and Youngstown State, sitting beside them in the courtroom on trial?

In Dave Aranda’s four years as LSU defensive coordinator, LSU’s defense had only allowed an eight yard per play average once, the 2019 Ole Miss game, per Brody Miller of the Athletic. Pelini’s defense has done it twice in three games.

“I love Bo," he said. "I think Bo’s going to be a great defensive coordinator, he’s done it before, but we have to get better.”

However, eventually, the constant routine of Brennan and company taking the blows after bad defensive games will grow tiresome. Fans will want answers from those directly responsible, not the people who are doing their jobs.

LSU loses to Missouri: How an unlikely loss became inevitable

In a weird year, LSU had a weird week.