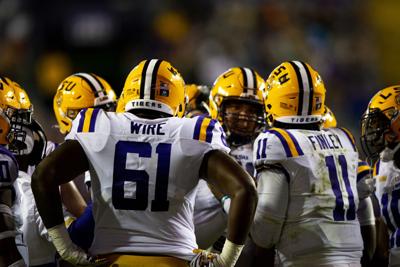 The Tigers left Death Valley with a 52-17 win over South Carolina, but they also left the game with one more thing: a reliable, solid back-up quarterback in 6-foot-6-inch, 240-pound freshman T.J. Finley.

First-game jitters can get the best of many, but Finley showed great poise, staying calm, cool and collected when he took the field for the first time.

The true freshman from Ponchatoula put on a clinic in his debut in the purple and gold, completing 17-for-21 passes through the air for 265 yards and recording a pair of touchdowns.

Finley’s performance against the Gamecocks are leaving many Tiger fans with one lingering question: Should he replace Myles Brennan as QB1?

Brennan, who has been the unanimous starter all season, is nursing a lower-abdominal injury, which gifted Finley the opportunity to showcase his capabilities.

While Finley ignited the LSU offense, putting up the most points it has had all season, the small sample size that Finley displayed Saturday does not take away from all Brennan has done.

You would not see it from the eye test, as LSU has dropped the first two of three games it has competed in this season behind Brennan, but his numbers and accomplishments thus far speak for themselves.

Over his first three starts, Brennan has solidified his name in the LSU record books in multiple categories.

Recording 1,112 passing yards and 11 touchdowns has been good enough to give him the most passing yards and touchdowns in three starts in LSU history, including last year’s Heisman Trophy winner, Joe Burrow. In addition to that, he has also become the first Tiger quarterback to throw for 300 or more yards in a trio of starts.

Aside from on-field stats, Brennan brings a key component to a young, inexperienced Tigers team: leadership.

The junior quarterback has bought into the offense that Head Coach Ed Orgeron and Offensive Coordinator Steve Ensimnger has built. Instead of doing what many quarterbacks would do in his position — enter the transfer portal — Brennan has patiently waited his turn, taking notes behind Danny Etling and Burrow.

For anyone who may have had the lingering thought that Finley will replace Brennan as the starter, Orgeron has other plans.

The LSU football team returned to Death Valley after last week’s game against Florida was postponed to Dec. 12, a week before the SEC champion…

Thunderstorms likely in the morning. Then a chance of scattered thunderstorms in the afternoon. High 79F. Winds SSW at 10 to 15 mph. Chance of rain 60%.

A few clouds from time to time. Low 57F. Winds light and variable.

Periods of rain. Low 57F. Winds light and variable. Chance of rain 70%. Rainfall around a quarter of an inch.