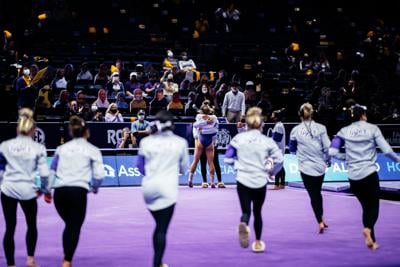 A new chapter, the same team.

On Monday, LSU gymnastics Head Coach Jay Clark announced that five of the six graduating seniors would return for the 2022 gymnastics season. Seniors Sami Durante, Reagan Campbell, Christina Desiderio, Sarah Edwards, and Bridget Dean will compete for a fifth season after the NCAA granted all spring sport seniors an additional year of eligibility after COVID-19 cut their junior season short.

"We are thrilled to have these five returning," Clark said. "There is no doubt that the progress of the underclassmen this year combined with the experience of these seniors will be a great combination for success."

During the recent 2021 season, Campbell held the anchor spot on beam, and Durante anchored the event on the uneven bars. Campbell holds a career-high 9.75 on the balance beam, while Durante averaged a 9.9 on bars in the previous season. Edwards gave season high 9.925s in both vault and floor for the season. Dean contributed a hit routine on every single beam rotation in 2021, while Desiderio put out a season and career high 9.5 on beam.

The decision to come back wasn't an easy one to make for every senior. Durante and Edwards didn't have much doubt about competing another year due to the fact that the pair haven't quite completed their educations yet. Durante aspires to have a future career as a collegiate coach and plans to become a graduate student in sports management in the fall. Edwards still needs to complete her undergrad degree in engineering while taking the MCAT this summer.

The pair realized this would be a once in a lifetime opportunity and the decision began to reflect on Campbell, Dean, and Desiderio as well.

"When a few of us started saying 'I'm going to come back'', Durante said, "I think that helped the rest say 'Okay, I can do this too.'"

The 2022 gymnastics team will boast a team of 21 gymnasts (despite only having enough locker room space for 18) with all of the returning seniors backing the experience of over 50 meets and All-America honors.

Despite having four years at LSU on their side, the seniors realize their experience will not leave them a definite spot amongst every rotation. The competition only gets tighter as the Tigers welcome Aleah Finnegan, Kaytlyn Johnson and Tori Tatum to the lineup. Newcomer Finnegan is a U.S. Olympic team hopeful for the summer and the younger sister of one of the greatest gymnasts in LSU's history: Sarah Finnegan. The older sister is a 23-time All-American, five-time SEC champion, and the only two-time SEC Gymnast of the Year in league history.

Additionally, the all-arounders Kiya Johnson and Alyona Shchennikova will head into their junior years. The leading gymnast Johnson put out three 10's on floor and was named the 2021 SEC Specialist of the Year despite missing a majority of the season due to an Achilles injury. Shchennikova averaged 39.394 in the all-around this recent season with career-high 9.95's on vault and bars.

Returning juniors Lexie Nibbs and Kai Rivers prove to bring even more promise to the junior class as they return from injuries that left them out of the 2021 season. Rivers held career high 9.9's in vault and bars and a 9.5 in beam during her debut season in 2020.

Not to mention the league's third-time SEC Freshman of the Year Haleigh Bryant doesn't look like she's slowing down any time soon. The freshman gave a stellar debut season when making the all-freshman team, earning the SEC Freshman of the Week five out of eight times and finally becoming the NCAA Vault Champion.

“I think it will be the factor that pushes us over the edge this year and helps us excel,” Edwards said. “We’re really excited.”

Olivia Gunter was the only senior (along with manager Gracen Standley) who opted out of an extra season. The Mandeville, Louisiana, native graduated in May from the Manship School of Mass Communication with a 4.006 GPA.

"Olivia Gunter and her daily presence will be dearly missed," said Clark, adding that she was one of the biggest contributors the program has ever had. "She was truly the heartbeat of this team and one of our most vocal leaders. I could not be more proud of Olivia graduating and we will miss her presence and love for LSU next year."

LSU only missed the NCAA final four by .038 points and placed second in the SEC Championship meet by one-tenth of a point this year. Edwards commented that an NCAA title this year could've possibly tempted her to retire. However, these disappointing and narrow factors are what gave the five seniors enough push to return for 2022.

“They have a little bad taste in their mouths with the way things ended,” Clark said. “They’re on a mission right now.”

Some clouds. A stray shower or thunderstorm is possible. Low 74F. Winds light and variable.

Some clouds. A stray shower or thunderstorm is possible. Low 74F. Winds light and variable.

Mostly cloudy with a slight chance of showers and thunderstorms. Low 73F. Winds light and variable. Chance of rain 30%.