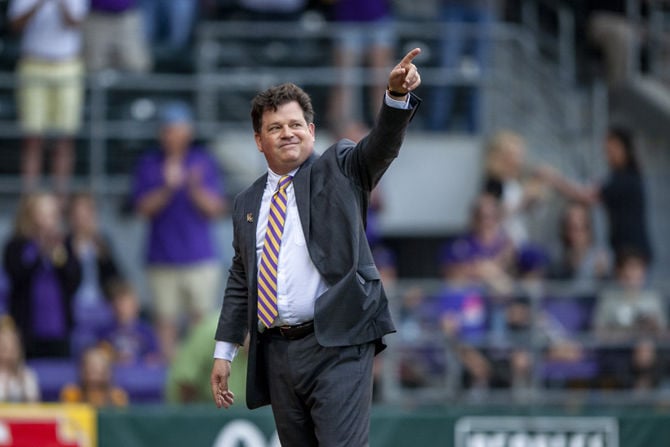 LSU athletic director Scott Woodward is introduced to the crowd during the Tigers' 5-3 victory over Lamar on Tuesday, April 23, 2019, in Alex Box Stadium. 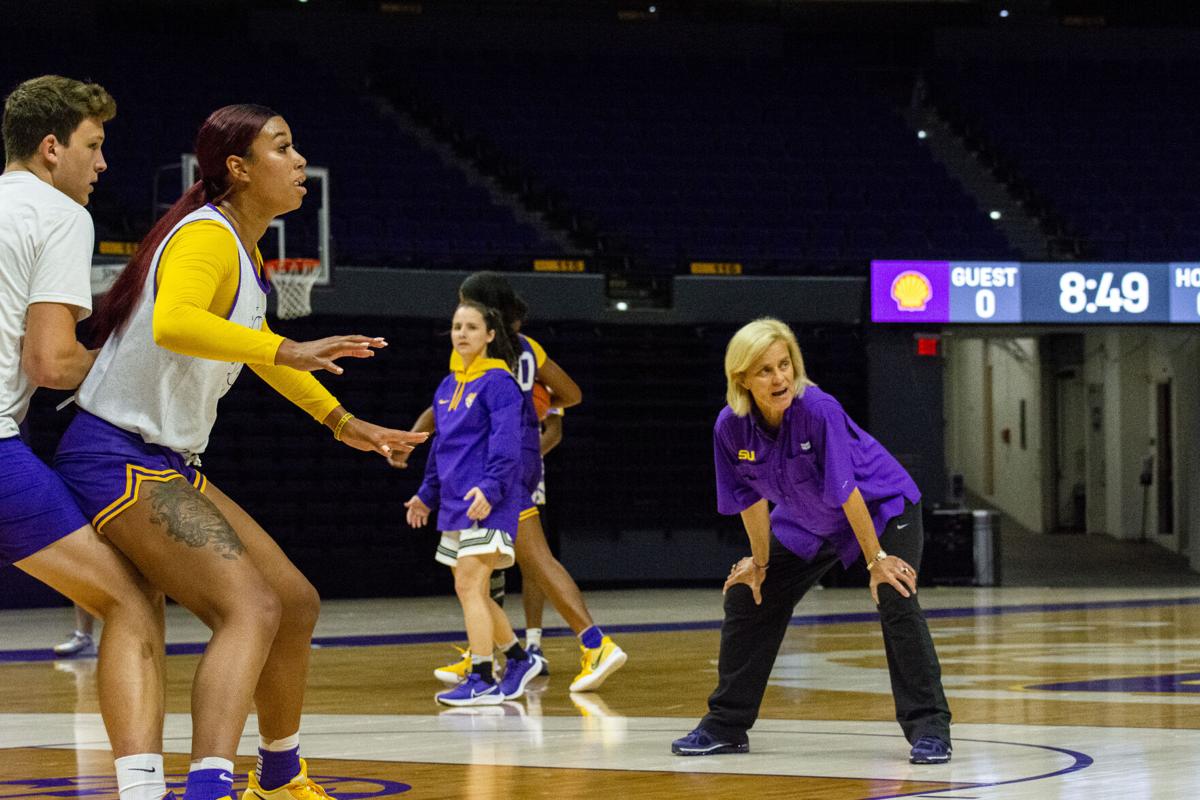 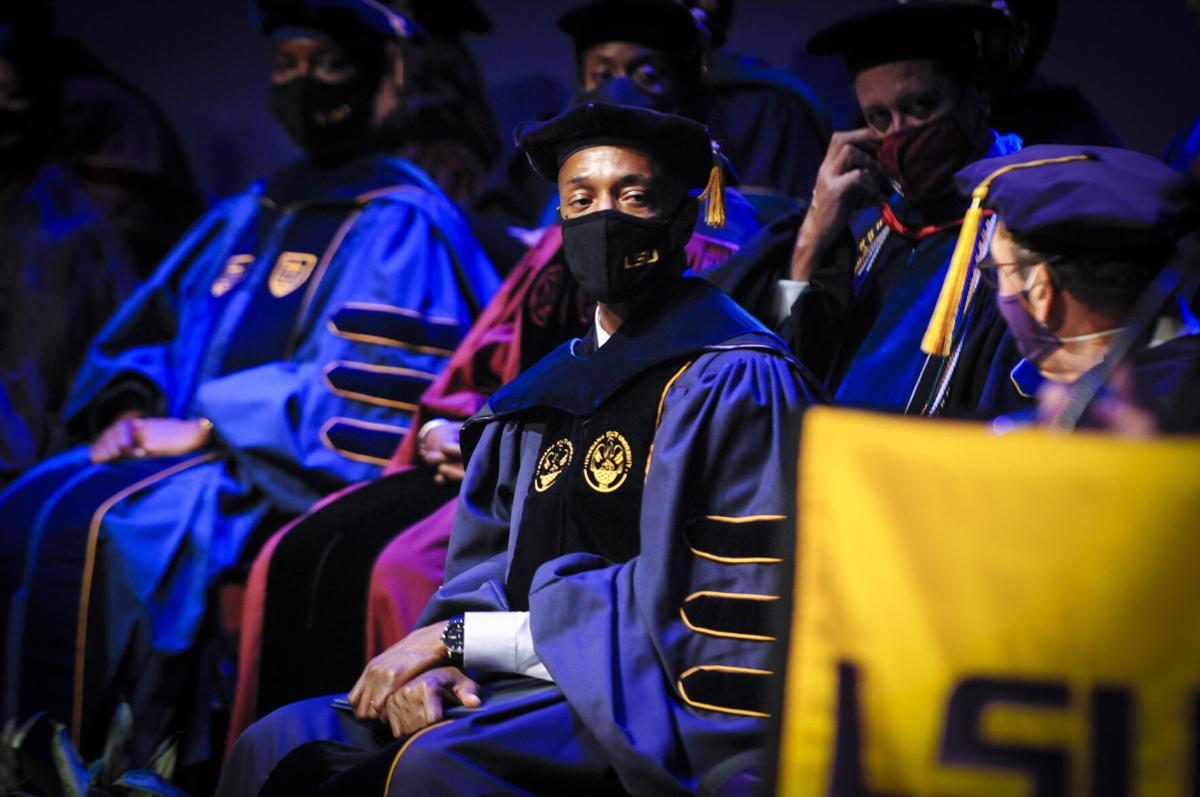 After weeks of speculation, it is now official that Ed Orgeron will not return to LSU for the 2022 season.

With the news of Orgeron’s departure now confirmed, the search for a new head coach officially begins. With the search now underway, here are five questions to answer as the search begins.

Will LSU only consider coaches with a clean background?

A large part of the downfall of Ed Orgeron’s time at LSU was the off the field issues that came to light after 2019. From verbal altercations with fans, to viral photos, to a massive Title IX scandal, Orgeron had created just as many issues off the field as he did on it.

How Ed Orgeron built championship team, let it all fall apart: 'Time for a new direction'

Ed Orgeron grinned as he walked toward midfield.

Obviously, the biggest of these issues is the Title IX scandal, which is still ongoing and is a massive stain on the university. With that being said, LSU can’t afford to hire a coach who has bad off the field history due to the current climate at the university. This would take potential names like Urban Meyer and Hugh Freeze automatically off the list. Those two are just high-profile examples that may not necessarily have been considered anyway, but any candidate that has a history of off-field issues or scandals will likely not be considered.

Will Scott Woodward look to land another big name?

Looking at Scoot Woodward’s career as an athletic director, he’s had a history of making big-name hires, even during his short time at LSU.

Just earlier this year, he hired arguably the best women’s basketball coach in the country in Kim Mulkey. While at Washington, he hired Chris Petersen, who was coaching Boise State at the time, and would go on to completely turn around Washington. At Texas A&M, he hired Jimbo Fisher, who was coming of an 83-23 record at Florida State, and has Texas A&M a game away from the College Football Playoff last season.

Woodward’s track record when it comes to hiring coaches is a very strong one, and that combined with the draw of the LSU coaching job makes the coaching search feel promising. Coaches like James Franklin, Lane Kiffin and Jimbo Fisher are just a few of the big-name coaches who have been rumored candidates so far. There have even been rumors that Woodward will try to go after Dabo Swinney, which goes to show almost no name is too big to be written off for the job.

Will LSU make an effort to hire its first black head coach?

In the 128 year history of the LSU Football program, there have been 32 head coaches, and all 32 have been white men.

With LSU selecting William Tate as its first black president early this year, now would be the perfect time to change that. The two names that immediately come to mind when considering this are James Franklin and Mel Tucker. Franklin is arguably the most realistic candidate that has been mentioned for the LSU job, and if hired, would be LSU’s first black head coach.

Mel Tucker is the other possible candidate that would make history in this way, and is currently seeing massive success at Michigan State. Tucker has led the Spartans to a 7-0 record so far this season, the program’s best start since 2015. Like Franklin, Tucker has also had experience in the SEC, making recent stops at both Alabama and Georgia. Tucker is also familiar with LSU and Baton Rouge, having been the defensive backs Coach for the Tigers in 2000.

It has been made clear that President Tate will have an active part in the ultimate decision, and with that being the case, hiring the university’s first black head coach will be something that is at the very least taken into consideration.

What assistant coaches should be retained?

Whenever a new coach is hired at a school, it also comes with typically a whole new staff. The best course of action is to give the new head coach the freedom to assemble his staff however he wants. With that being said, there are a few assistants currently on staff at LSU that are worth holding on to, no matter who the head coach is.

At the top of that list is current defensive backs Coach and recruiting coordinator Corey Raymond. Raymond has been at LSU since 2012 and is known to many as the “Godfather of DBU.” Raymond has been the driving force behind LSU’s dominant secondary for years and has proven himself as an excellent recruiter as well.

Another assistant that is definitely worth keeping is Strength and Conditioning Coach Tommy Moffit. Moffit has been on staff at LSU since 2000, and has played a key role in turning LSU into the program it has become over the last 20 years.

Those two are the obvious names that come to mind, but assistants like Offensive Line Coach Brad Davis and Special Teams Coordinator Greg McMahon could also be considered.

Will a Group of Five coach be considered?

Despite Woodward’s track record of making big name hires, there are multiple group of five coaches whose names have been in the mix.

Luke Fickell is the most notable of these names, but with Cincinnati’s status and impending move to the Big 12, he is still considered by many to be a big name hire.

Apart from Fickell, the other two Group of Five coaches who have been mentioned are Billy Napier and Jamey Chadwell.

Napier was one of the early rumored candidates due to his success at Louisiana-Lafayette. His success there and his familiarity with Louisiana led many to believe that he could be in the running for the LSU job.

Chadwell is another interesting name, especially when looking at what he has accomplished at Coastal Carolina. He has turned Coastal Carolina into arguably the second-best Group of Five program in the country behind Cincinnati, and has even had success over Napier. These two obviously won’t be at the top of the list, but it will be interesting to see if they are considered if some of the bigger names turn down the job.

What were perceived to be rumors have been shut down, the deal is done. Coach Ed Orgeron’s career with LSU Football after the conclusion of th…

Column: If Orgeron was fired for on-field problems, decision was impulsive, mishandled

If LSU didn’t have Ed Orgeron as their head coach from 2018-2019, then they wouldn't have Joe Brady, Joe Burrow, or a national title. And yet …

Cloudy in the evening, then off and on rain showers after midnight. Thunder possible. Low 53F. Winds light and variable. Chance of rain 60%.

Cloudy skies early followed by scattered showers and thunderstorms later during the night. Low 69F. Winds SSW at 5 to 10 mph. Chance of rain 40%.