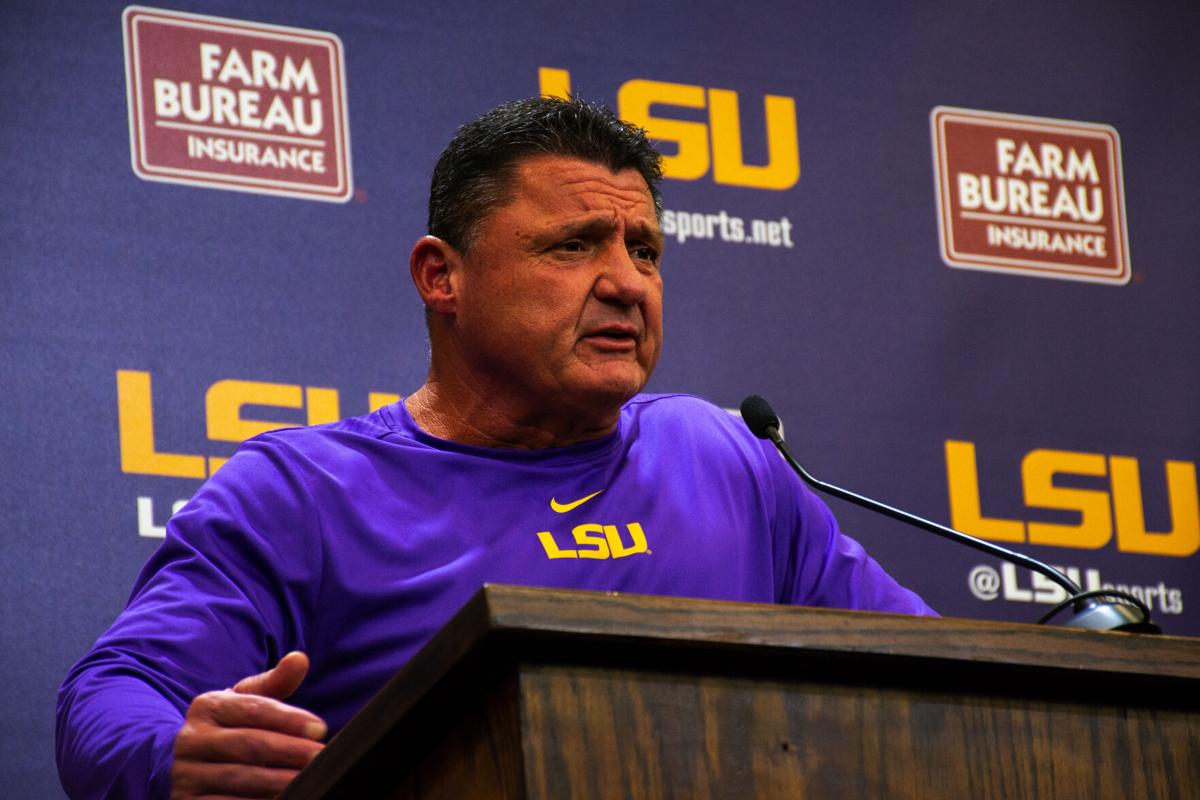 Ed Orgeron speaks at a press conference on Monday, November 1, 2021 in the Bill Lawton Room in Tiger Stadium. The media availability was the first in-person weekly session LSU held since the COVID-19 pandemic began. 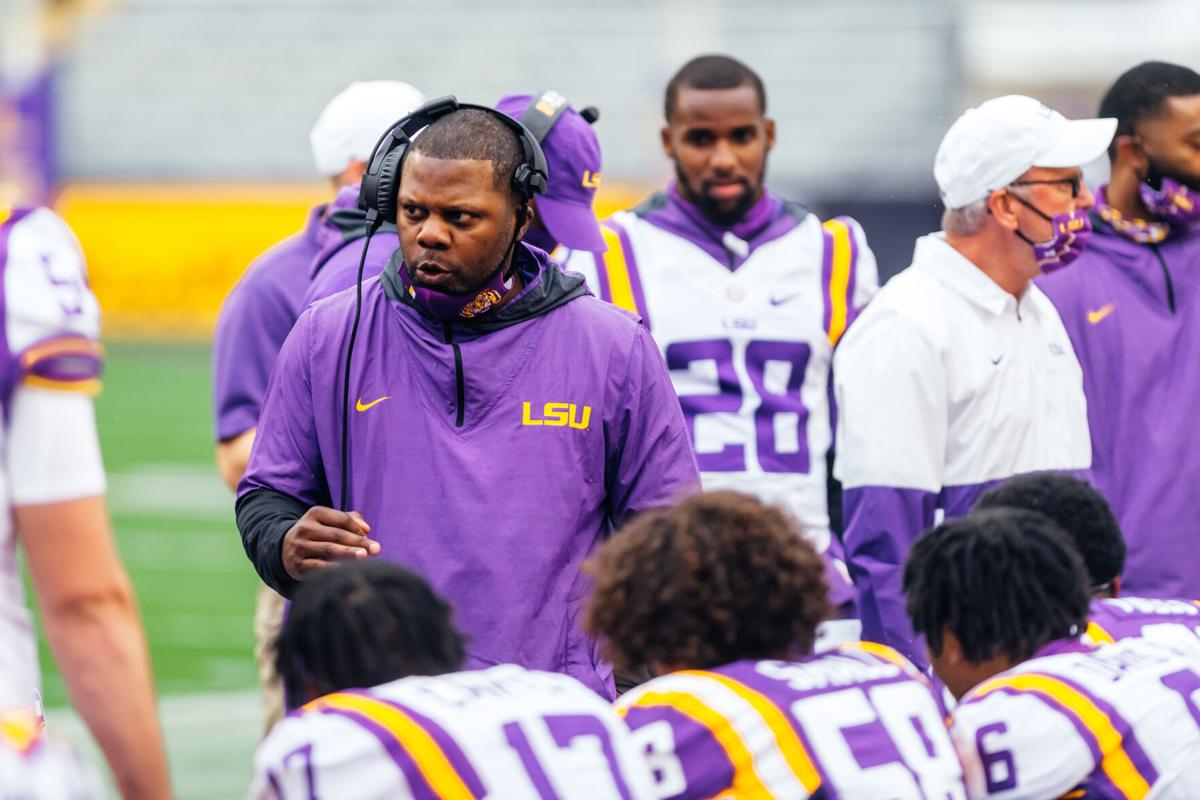 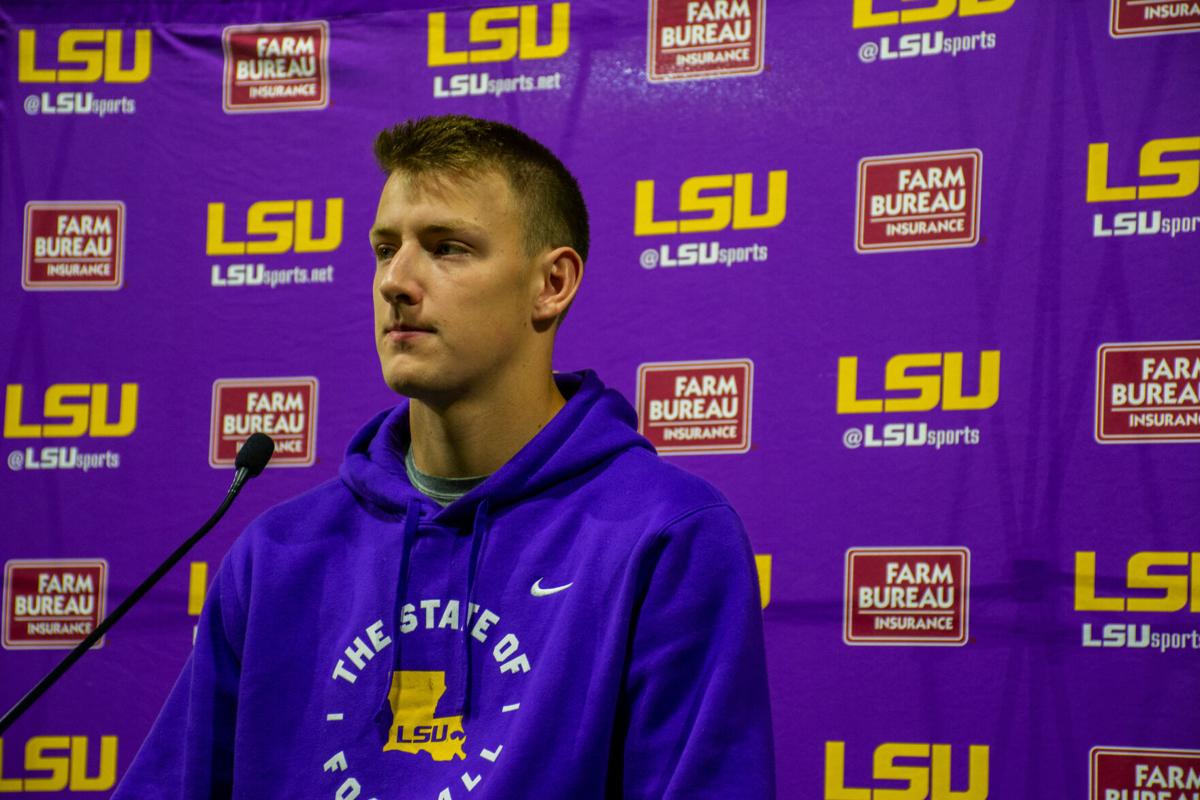 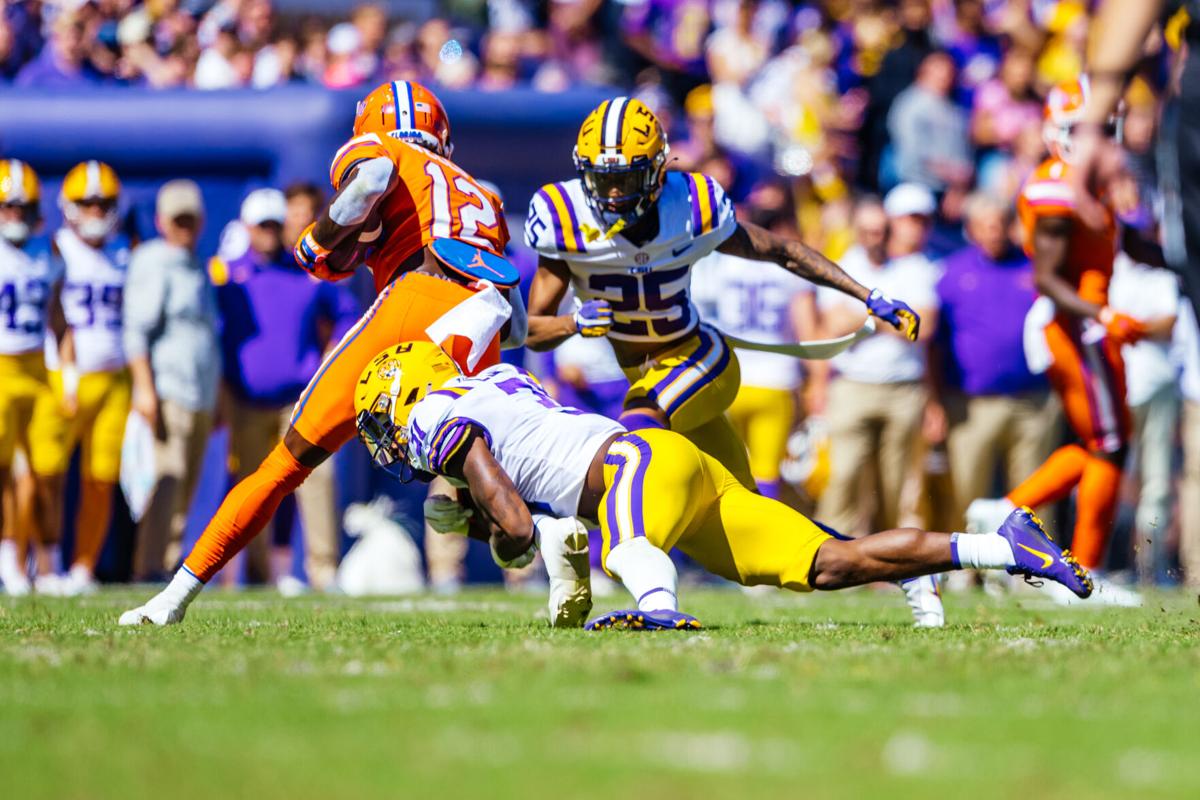 Ed Orgeron laughed Monday when he was asked if he had thought about the last time his team traveled to Tuscaloosa, Alabama, to face the No. 3 Crimson Tide. He said he hasn’t had much time to reflect.

But he did recall one memory, when he was sitting on his porch in 2019 before the Alabama game. Thinking.

“I knew if we won that game, we had a chance,” he said. “We had to go through Alabama. That was a big victory for us.”

It was a legendary victory. Orgeron, Joe Burrow and the Tigers toppled Alabama, ran the table and won the national championship. That was almost two years ago.

“Things are different now,” Orgeron said, “but it’s still LSU-Alabama. My job is to get these guys to play as hard as we can. We gon' be prepared and we'll go.”

Indeed, things are different. This year, LSU is a 29-point underdog. Its coach was fired three weeks ago. And up to eight defensive starters could be out for the Tigers as they prepare to face an Alabama team that is averaging 46 points and 600 yards per game.

If Orgeron’s team loses Saturday, he’ll finish his tenure with one win and five losses against Nick Saban’s juggernaut.

Here are a few storylines to watch during Alabama week.

Scheme: Too simple or not simple enough?

Two years after winning a national championship, Orgeron’s team has neither found an identity nor stuck with a schematic approach that suits both players and coaches. On Monday, the interim coach answered a question about his self-scouting report with a rambling diagnosis of all the problems he and his staff have yet to solve this season.

Orgeron didn’t seem hopeful his staff could solve the problems.

“This part of the season, you just can't put a lot of new stuff in,” he said. “But, we put in a couple of wrinkles to make it tough. And then the biggest part for us on defense is adjusting.

The Reveille talks LSU-Alabama with The Crimson White's Ashlee Woods

Jared Brodtmann: Hi, everyone! I’m honored to be joined this week for a special LSU-Alabama …

Ask Orgeron in 2020 what was wrong with his Bo Pelini-led defense, and he’ll say things were too complicated.

“We’ve gotta simplify,” he said after an embarrassing loss at Missouri. “I don’t care if we have to play one defense and one coverage. Play it. Play it right. Do whatever we need to do, put our athletes in a good position and let them make plays.”

A year later, ask him again what’s wrong with his Daronte Jones-led defense, and he’ll say his unit is entirely too simple, too predictable. What does Orgeron mean by that? Perhaps he wants a combination of the two: variety pre-snap, but simplicity post-snap. Regardless, eight games into an important season, according to Orgeron, LSU is lost on defense. Injuries have played an important role, but whatever Jones drew up in fall camp did not work.

In LSU’s four losses — to UCLA, Auburn, Kentucky and Ole Miss — its defense was embarrassed.

"We're too vanilla on defense," Orgeron said Wednesday. "We do have to mix it up a little bit to give the opponent a challenge."

The Quarterback Room: Out with the old, in with the new

The night before the Florida game, Walker Howard, LSU’s prized five-star quarterback recruit, learned Orgeron had been fired, a source told The Reveille.

Howard knew Orgeron’s job status before the public knew and before current players knew, if what some players said publicly is true. His inside knowledge may be an indication of LSU’s priorities at the quarterback position. And it could help explain why Myles Brennan decided to enter the transfer portal on Monday instead of returning to LSU to compete for the starting job again.

Column: How Nick Saban made one of easiest and hardest head coaching jobs

Orgeron said Brennan walked into his office “teary-eyed” Monday morning, as he told his coach his decision.

“I said, 'Listen, hold your head high,’” Orgeron said. “‘You gave all you can to LSU, you graduated from LSU, and I wish you the best.’”

Max Johnson has been solid in Brennan’s absence. Orgeron said Monday that he hopes to redshirt four-star freshman passer Garrett Nussmeier, who’s shown promise in limited action. Howard, if he holds true to his verbal commitment, will enroll at LSU next fall.

Time has simply passed Brennan by.

He showed up to campus in 2017 too frail for the SEC. After bulking up, he had a chance to compete for the starting job, but lost it to Burrow. When he was finally handed the keys in 2020, Brennan performed well in his first three starts. But an oblique injury knocked him out for the season. When he healed, Johnson had emerged in his absence, which meant Brennan had to compete for his job yet again. But a freak arm injury suffered in a fishing accident ended the competition and the quarterback’s LSU tenure.

Now, LSU will hire a new coach, hand the reins to a young gun and look to the future. Brennan, who almost outlasted Orgeron at LSU, will try to get one last shot at impressing NFL scouts.

“And Joe Burrow did the same thing, and it worked out for him,” Orgeron said. “I hope the same thing works out for Myles. He wants to play pro ball. I hope he gets that shot.”

The secondary: In rough shape

All-American Derek Stingley Jr. is likely out for the year, which means he may have played his last snap as an LSU Tiger. His All-American partner, Eli Ricks, is also out for the season. Starting safety Major Burns, the transfer from Georgia, will not suit up against Alabama, and neither will starting nickel Sage Ryan.

Cordale Flott, who has taken the top corner spot in Stingley and Ricks’ absence and performed well, did not practice Monday or Tuesday, Orgeron said. He is "very questionable" for Saturday. If he’s out, he’ll join the four aforementioned injured defenders, as well as Andre Anthony, Ali Gaye and Joseph Evans on the defensive line.

Safety Jay Ward may be the only healthy starting defensive back on Saturday. Orgeron said Monday the team will likely place Cam Lewis opposite Ward at safety. He said that he’ll turn to Raydarious Jones, Darren Evans and Todd Harris as replacements for injured defensive backs.

Alabama quarterback Bryce Young has completed 70% of his passes, averaged nine yards per attempt and thrown only three interceptions this season.

Column: The Rise and Fall of Ed Orgeron

The Raising Cane’s on Lee Drive was plastered with Ed Orgeron's face. Cardboard cutouts of him in different poses guarded the rooftop of the f…

This weekend could be a thriller in Bryant Denny Stadium as the No. 3 Alabama Crimson Tide will combat the Tigers of LSU. LSU has a chance to …

Column: LSU and Alabama have small difference in talent, large gap in results

Cloudy and damp with rain in the morning...then becoming partly cloudy. Areas of dense fog. High 67F. Winds NNE at 5 to 10 mph. Chance of rain 70%.

Cloudy in the morning with scattered thunderstorms developing later in the day. High 77F. Winds S at 10 to 15 mph. Chance of rain 50%.

Scattered thunderstorms in the evening, then mainly cloudy overnight with thunderstorms likely. Low 67F. Winds SSW at 5 to 10 mph. Chance of rain 80%.