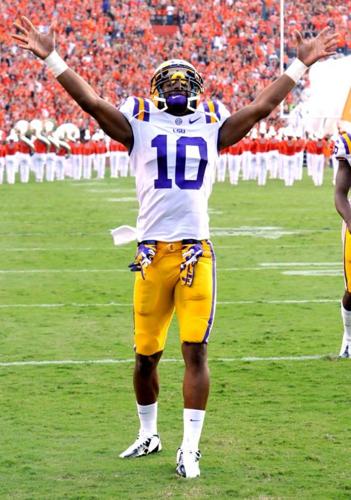 LSU senior wide receiver Russell Shepard (10) hypes up the crowd before the Tigers' 12-10 victory over Auburn on Saturday Sept. 22, 2012 in Jordan-Hare Stadium. 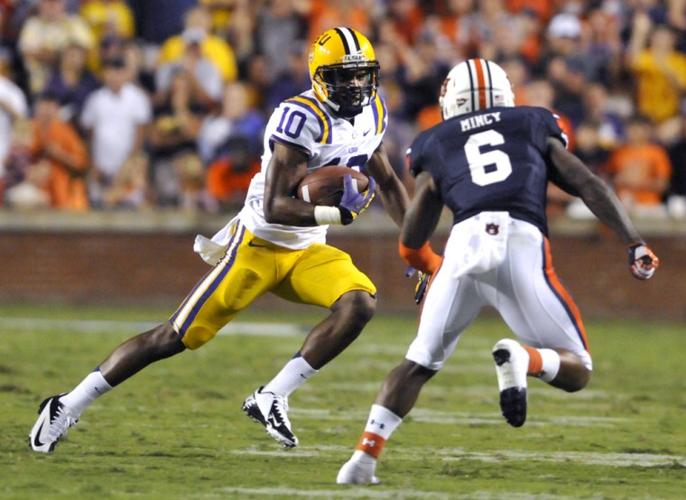 LSU senior wide receiver Russell Shepard (10) attempts to make his way around Auburn sophomore defensive back Jonathon Mincy (6) during the Tigers' 12-10 victory over Auburn on Saturday Sept. 22, 2012 in Jordan-Hare Stadium.

LSU senior wide receiver Russell Shepard (10) hypes up the crowd before the Tigers' 12-10 victory over Auburn on Saturday Sept. 22, 2012 in Jordan-Hare Stadium.

LSU senior wide receiver Russell Shepard (10) attempts to make his way around Auburn sophomore defensive back Jonathon Mincy (6) during the Tigers' 12-10 victory over Auburn on Saturday Sept. 22, 2012 in Jordan-Hare Stadium.

Most people see what is, and never see what can be.

That’s a thought straight from the brain of Albert Einstein, and I’d like you to consider it as you read this column.

This Saturday marks senior wide receiver Russell Shepard’s final game in Death Valley, and odds are you have been underwhelmed with the way his career in an LSU uniform has played out.

Unless you are wholly unfamiliar with LSU football or have been comatose for the last five years or so, you know Shepard’s story.

It’s one seemingly rife with unfulfilled potential. He was the high school All-American everyone and their mother wanted on their team. You would’ve thought LSU signed the second coming of Texas-era Vince Young the way fans rejoiced March 3, 2008, when Shepard officially committed.

But LSU’s love affair with Shepard started to deteriorate almost from the onset. He showed some early promise — hell, he was even given 50:1 odds as a 2011 preseason Heisman Trophy candidate — but Shepard never panned out as that program-defining talent.

Here’s why there’s more to that story. Here is why Shepard, while never going down in the history books as an LSU great, shouldn’t be looked at as a failure because of his lack of production.

The Houston native embraced everything LSU, serving as an    athletic ambassador even though he hasn’t met his lofty expectations. And most importantly, the end of his story still hasn’t been written.

He served as an unofficial LSU recruiter before he even arrived on campus, encouraging other top-end recruits to join him in Baton Rouge.

Shepard has always been there, good performance or bad, to give his perspective on the LSU football team. He is a spokesman for the team and has never had a problem discussing his own career.

When things didn’t go according to plan, he stuck with it. Could Shepard have gone elsewhere and established himself? Absolutely. But he showed courage by sticking to his guns and seeing out his four-year commitment to LSU.

He even ran for Student Government at one point. The man loves the University and has given everything he could to it.

Who is Russell Shepard? He is an average wide receiver with slightly above average play-making skills on an elite Southeastern Conference team.

Who can Russell Shepard be? Unfortunately, we may never find out. He’s been a nomad for four years on an offense that hasn’t clicked, and he’s been lost in the shuffle.

But my guess, judging by his early-career flair and the offensive life we’ve seen from him lately, is that there is still something in the tank. Something special.

Here is my two-part proposition. First, when Shepard is introduced along with the other seniors on Senior Day, give him a proper Tiger Stadium send-off for having the guts to stick with the program even while enduring plenty of trials and tribulations.

The second goes straight to LSU coach Les Miles: give the kid a shot.

If LSU opens up an early lead on Ole Miss this weekend, which is certainly not a given, give the fans a chance to see Shepard run the offense, if only for a series.

Give him a chance to run the option, a quarterback draw, or even — gasp! — his first career pass.

Give him the chance to show why the hype was real.

Don’t look at what is. Look for what can be, and maybe Shepard will show something brilliant like we all thought he would.