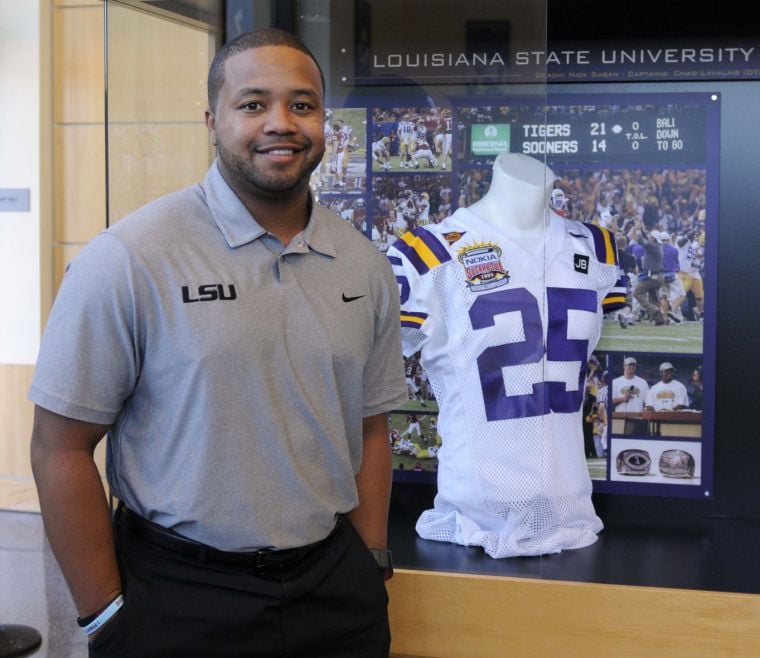 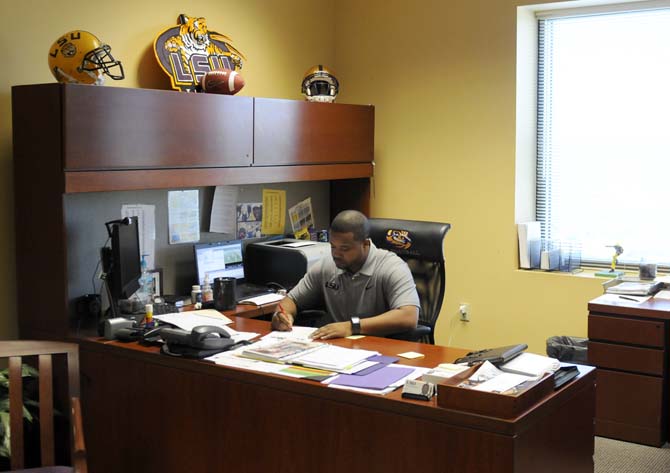 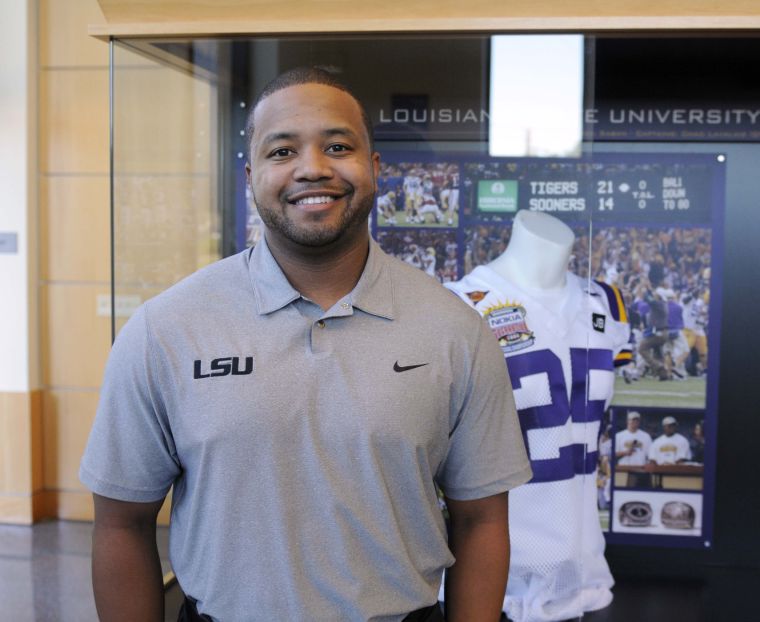 On Jan. 4, 2004, three seconds into the BCS National Championship Game in New Orleans, a No. 25 jersey lined with purple and gold emerged from the backfield and darted for a 64-yard run.

A touchdown, 117 yards and a 21-14 victory later, the same freshman running back was crowned the most valuable player of LSU’s first national championship win since 1958.

He’s still in the locker room, patting players on the shoulder pads. He still runs out of that tunnel into Tiger Stadium on Saturday nights. In 2013, Vincent’s still a part of the football team, but as assistant director of player personnel.

From evaluating talent to coaching players off the field, Vincent’s job is to guide and develop players while ensuring an environment that is beneficial to their success at LSU.

After a four-year stint in the NFL with the Atlanta Falcons and Pittsburgh Steelers, Vincent returned to Baton Rouge to graduate from LSU in spring 2011. He earned his degree in communication studies, which he said was a “very gratifying” moment in his life.

With his college diploma in hand, the Lake Charles native was eager to get out of Louisiana, having had a taste of big cities like Atlanta and Pittsburgh.

But in August 2012, an unexpected opportunity presented itself, and Vincent knew he had to run with it.

“It was an opportunity to get back in the program which I started at and helped me grow as a man and mature,” Vincent said. “I never thought I’d be here, but I love it. People always say where you start at is usually where you finish. It’s been a blessing in disguise.”

The campus hasn’t changed much since 2003. Walking past his old stomping grounds and up Victory Hill, the only thing that feels different than his time as a student-athlete is the business attire he now wears every day, Vincent said.

“I’m not too far removed from being here myself,” Vincent said. “I don’t want to try to call any of my coaches old, but the gap [between the players and I] is really small. With those guys I can relate a little bit more.”

Having played under former LSU coach Nick Saban in his first two seasons and coach Les Miles in his last two, Vincent has had a feel for different eras in the program.

Sophomore running back Jeremy Hill said Vincent’s experience and leadership is something the players try to emulate.

“I have a very close relationship with Justin,” Hill said. “He’s a great person to lean upon just being a running back here ... and him being so close in age to us, we can talk about anything and not feel embarrassed or ashamed about anything.”

His jersey hangs in the lobby of the Football Operations Center. The image of Vincent cradling the ball on the cover of Sports Illustrated’s commemorative issue joins several pictures lining the building’s hallways.

The 30-year-old said current players recognize who he is and what he accomplished as a Tiger. They sometimes ask Vincent about that night in New Orleans. They listen to him. They respect him.

“Every time they bring it up I say, ‘Hey man, you need to try to get to where we were and make this a great thing,’” Vincent said.

Football has been a part of Vincent’s life for years, but now as a mentor, football is his tool for teaching.

Although football doesn’t define him as a person, Vincent said he’s thought about coaching someday.

Occasionally, Vincent recalls the game against Oklahoma and his opening run in the Superdome. A hole opened for him along the Tigers’ 20-yard line. Vincent saw his chance and went for it.

He knows how quickly those holes can close.

“Take advantage of your opportunities,” Vincent said. “I preach that to them a lot. These four years right here ... is the best time you will ever have in your entire life. I promise you. Enjoy it. Seize the moment.”

Showers early, becoming a steady rain late. Low 56F. Winds E at 5 to 10 mph. Chance of rain 60%. Rainfall around a quarter of an inch.