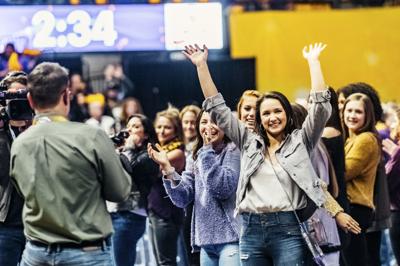 Former LSU gymnast and U.S. National Team member Sarah Finnegan was recently named to the USA Gymnastics Board of Directors as the Women’s Artistic Gymnastics athlete director. While at LSU, Finnegan established herself as one of the greatest gymnasts in LSU history and became the only two-time SEC Gymnast of the Year in league history.

"It is an honor to be elected to USAG's Board of Directors,” Finnegan commented. “I am looking forward to serving in this position to ensure the safety of athletes and to promote their overall well-being. I will be representing the athlete community at all levels of decision-making and will make certain their voices are heard."

The Missouri native was a member of the U.S. National Team, where she won national and international medals in Junior and Senior divisions. She also served as an alternate for the 2012 U.S. Olympic Team.

"Sarah Finnegan possesses a wealth of experiences that run the gamut as an athlete in our sport," LSU Gymnastics head coach Jay Clark told lsusports. "She has experienced the highest of highs as well as some of the lows. Her depth of thought and genuine character as a human being make her perfect to serve as an athlete rep on this board. I know without a shadow of a doubt her mind will always rest with the welfare of the athlete first."

Finnegan graduated in May 2019 with a bachelor's degree in kinesiology and is currently pursuing her master's degree in occupational therapy at Rockhurst University.

Cloudy skies this evening will become partly cloudy after midnight. Low near 40F. Winds N at 5 to 10 mph.

Cloudy skies this evening will become partly cloudy after midnight. Low near 40F. Winds N at 5 to 10 mph.

Partly cloudy in the evening with more clouds for later at night. Low 46F. Winds light and variable.