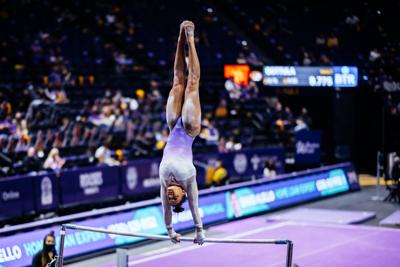 On Tuesday, the Women’s Collegiate Gymnastics Association named Haleigh Bryant the Region 1 Gymnast of the Year. She also shares the title with Alabama sophomore Luisa Blanco. The news comes after an exciting season for the LSU freshman.

The North Carolina native ended the regular season with career-high scores of 9.90 on bars and beam, 9.975 on floor, and 10 on vault. Bryant garnered her career-high on floor in the first meet of the season against Arkansas. She earned the first perfect score of her career in the last meet against Missouri.

The gymnast recently garnered her second career 10 during the NCAA Regional Final in Utah. She is the only freshman in the SEC and one of two to in the country to score a 10 in the 2021 season.

Haleigh Bryant is in a class of her own. Her 2021 campaign has been remarkable, but that’s nothing new for her. A freshman from Cornelius, Nor…

As for diplomatic honors, Bryant was named the SEC Freshman of the Year, marking the third time in history for an LSU freshman to be given this award. She earned SEC Freshman of the Week a total of six times during the season while also being named SEC Gymnast of the Week once. She was also named to the All-SEC gymnastics team.

In the debut season of her collegiate career, the freshman finished third on vault, fourth on floor, and ninth in the all-around in the entire nation.

Survive and Advance: Grit and mental toughness has LSU gymnastics competing for a national championship

“We survived and advanced,” said LSU gymnastics Head Coach Jay Clark after his team advanced past the NCAA Regionals in dramatic fashion. LSU …

A few clouds with an isolated thunderstorm possible after midnight. Low 62F. Winds ESE at 5 to 10 mph. Chance of rain 30%.

A few clouds with an isolated thunderstorm possible after midnight. Low 62F. Winds ESE at 5 to 10 mph. Chance of rain 30%.

Thunderstorms likely in the evening. Then a chance of scattered thunderstorms later on. Low 66F. Winds ESE at 5 to 10 mph. Chance of rain 80%.

Scattered thunderstorms in the evening, then mainly cloudy overnight with thunderstorms likely. Low 58F. Winds NNE at 5 to 10 mph. Chance of rain 80%.