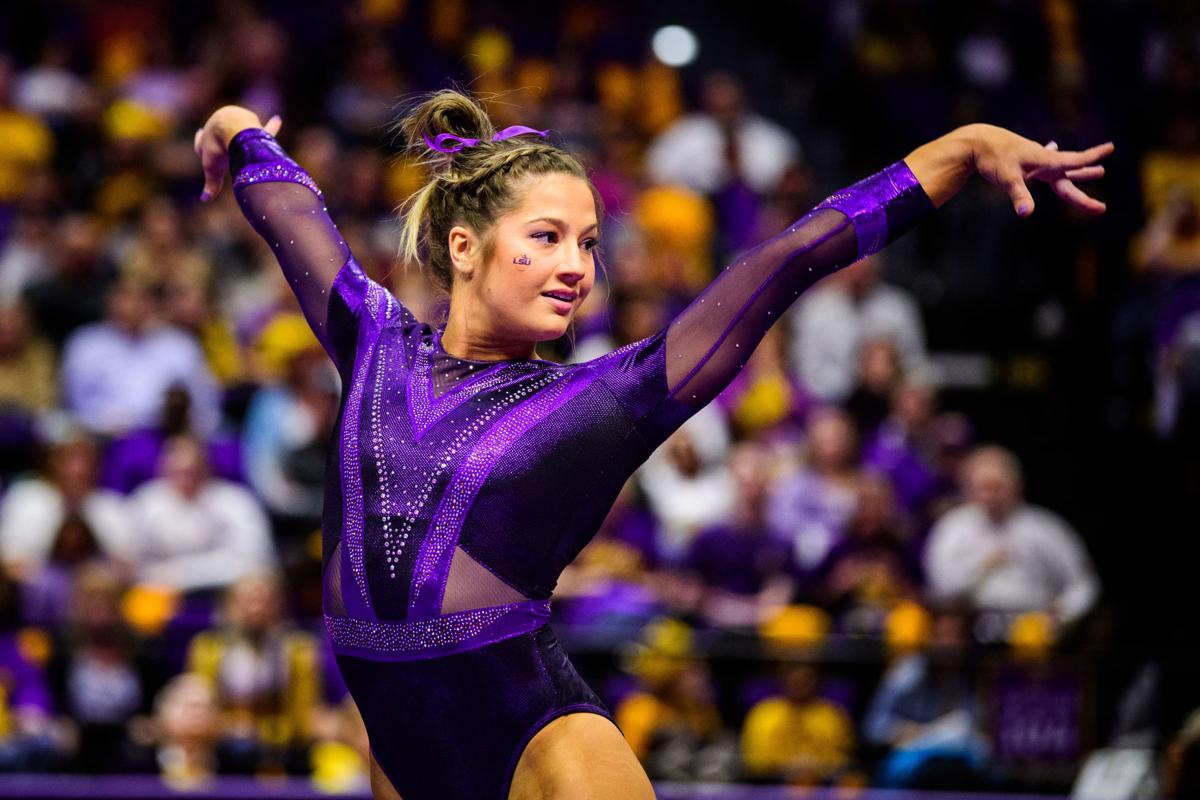 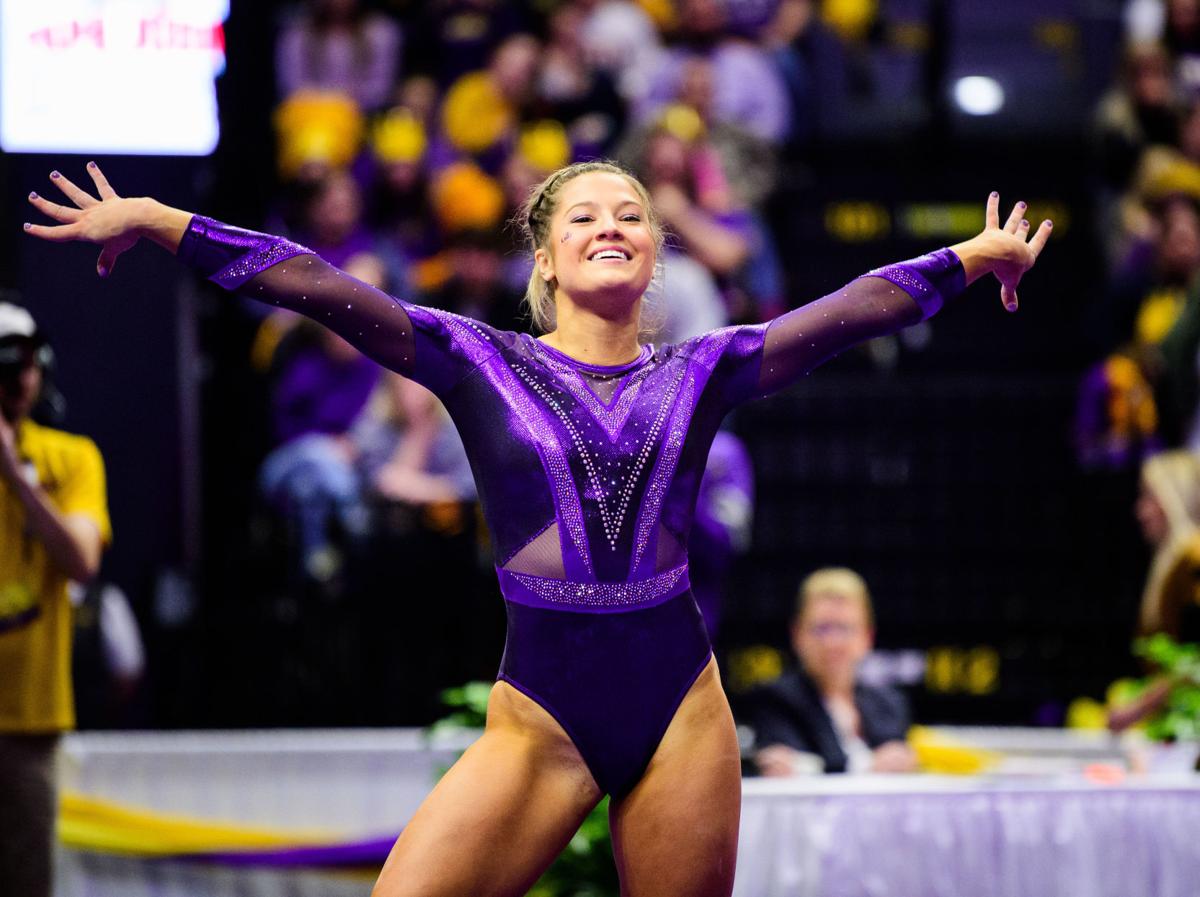 Olivia Gunter rarely finds herself speechless. The junior LSU gymnast has been among the loudest cheerleaders for her team over the past two years.

But now that she’s able to compete herself, she doesn’t have the words.

Instead, Gunter has one word: gratitude. After what she’s been through, she’s grateful to finally have the opportunity to contribute to her team’s success and everything that comes along with it.

As a freshman in 2018, Gunter was buried in LSU’s depth chart, and she sat out all of last season after rupturing her Achilles tendon while practing her floor routine before nationals in April 2018. Now a junior, Gunter has found a steady place in the Tigers’ floor lineup.

“It’s so surreal,” Gunter said. “To say that I get to be a part of this, I’m just so grateful for these opportunities. I’ll take anything I can get. It’s been so much.”

Gunter expected to feel intimidated or nervous when PMAC announcer Mike Smith announced her name, subsequently sending the PMAC into cheers, but instead, she was just excited.

'We know what we have': LSU gymnastics confident going forward, despite early struggles

Gunter remembers few details about her first meet as a freshman LSU gymnast. She’ll never forget the feeling of walking out of LSU gymnastics’ famed Tiger head tunnel and into the vibrant atmosphere of the PMAC. But then, she blacked out. Even though she can’t recall every detail from the meet itself, she does know how much she’s blossomed since then.

Unlike her first meet, every moment of her full in-meet routine for the Tigers earlier this season is seared in her mind.

Gunter was so excited for her floor routine that she shook in her first pose and she flew out of bounds on her first tumbling pass. But she didn’t care, nor did coach D-D Breaux.

“D-D just said ‘I wanted you on your feet,’” Gunter said. “It was so exciting and now I’m so much more excited to keep getting better and work on one step I can take each week for my friends. I felt like I had to be a freshman again.”

Gunter has shown that she has grown leaps and bounds since being a 18-year-old freshman. Breaux said Gunter earned her spot in the lineup and she is “fighting like a Tiger” to stay in it.

Gunter typically holds the second spot in LSU’s floor lineup. After jumping out of bounds during her first routine with a score of 9.625, she scored a career high of 9.85 in the two following meets.

The way she trains and the effort she puts in show her own dedication to the sport and the program.

“I’ve seen from her great maturity,” said senior Ruby Harrold. “She fights and she works so hard in the gym. To see that come to fruition in competition is cool. For her to be a staple in that lineup too is really really great to see. She brings a lot of energy and enthusiasm and she also brings great gymnastics. She’s a good, fun teammate to have.”

All of that electricity makes her LSU’s top “hype man or cheerleader” for her teammates. And she’s made the most of that self-proclaimed moniker.

She’s now famous on the “gymternet” — a portmanteau combining gymnastics and internet, representing the online presence of gymnastics fans — for tweeting “Hey Ruby” videos before every LSU away meet and for an entertaining mic’d up segment during LSU’s national championship practice.

She’s now contributing more than just her voice and contagious personality. Instead of handing the stick crown to her teammates, Gunter is hitting routines on the floor and getting crowned herself.

“This year, coming back and having the opportunity to do floor, I guess I expected myself to be a lot more nervous than I was,” Gunter said. “But when you hear all of the PMAC literally erupt in a roar and you feel everyone behind you, it’s just like the coolest thing ever.”

A year ago, Gunter didn’t know if she’d hear the roar for herself. She ruptured her Achilles at the end of her freshman season, and she wasn’t sure how she was going to come back from it.

In her own words, Gunter is not an effortless gymnast. She jokes that she sometimes forgets how to flip when she takes a week off from training to go to the beach. She has to put all of her effort into her craft, so taking all of those months off to rehab her Achilles pushed her to work that much harder.

Forced retirement was her biggest fear. The thought of potentially no longer competing was overwhelming, both mentally and physically for Gunter.

But thankfully, Gunter had someone in her corner who knew the recovery process well: former LSU gymnast McKenna Kelley.

“After it happened, she like came over to me and she just started talking to me and she prayed over me,” Gunter said. “I don’t think a friend has ever done that for me in my life. She just told me, ‘It’s going to be OK and we’re going to get through this.’”

Kelley ruptured her own Achilles just six months prior to Gunter.

Gunter said she’s not sure how she could have rebounded without Kelley’s support.

“She just kept emphasizing to stay in the moment too and to embrace where you’re at and embrace the injury because there’s good things that are going to come out of it,” Gunter said. “She was so right. I’m so grateful for her, I miss her so much.”

Even with the help of Kelley and her teammates, her first two seasons as a Tiger weren’t easy, and she knew it wasn’t going to be.

LSU then-associate head coach Jay Clark and the primary recruiter for the Tigers emphasized to Gunter on her recruiting visit that it wasn’t going to be a cake-walk. But LSU was the only school Gunter ever wanted to attend. She decided it was worth the challenge, and she was more than happy to take it on.

Growing up in Mandeville, Louisiana — about 70 miles east of Baton Rouge — Gunter was surrounded by people who wanted nothing more than to get out of the state after high school. Gunter wanted anything but that. Coming to LSU and competing for LSU was her dream.

Coming to LSU was about being in the right head space for her to succeed alongside so many powerful gymnasts.

“She’s just a kid that’s so happy to be on this team and for her to be contributing floor, something she’s wanted since she first got here,” Harrold said. “The coaches really harp on her about getting the numbers in and she’s always going extra.”

It all comes back to that word: gratitude.

Gunter is grateful for coaches who push her to be her very best and for teammates who she is able to grow alongside.

“I knew freshman year was going to be a big growing year for me and it was and unfortunately the Achilles thing happened, but I wouldn’t change how my first two years went for anything because it got me to where I am right now,” Gunter said. “It’s crazy, but it’s definitely a dream come true.”