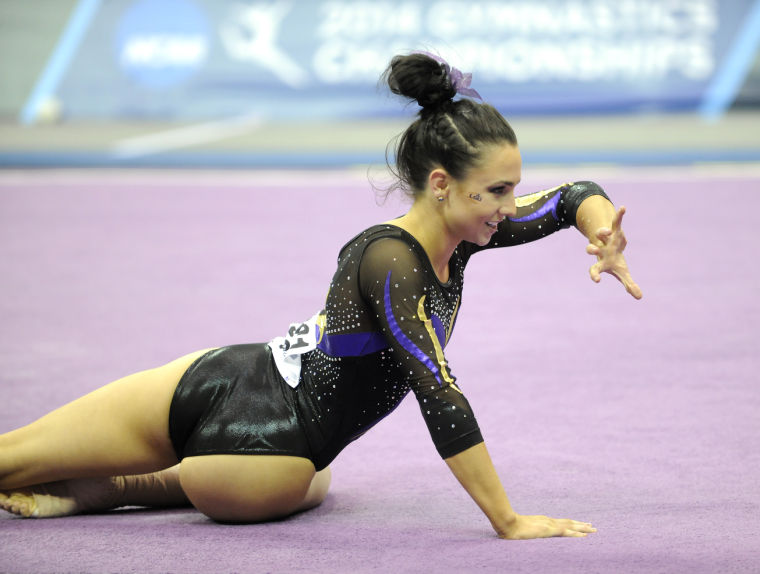 LSU junior all-around gymnast Rheagan Courville ends her floor routine Saturday, April 5, 2014 during the NCAA Gymnastics Regional in the PMAC. LSU won the regional with a score of 198.325. 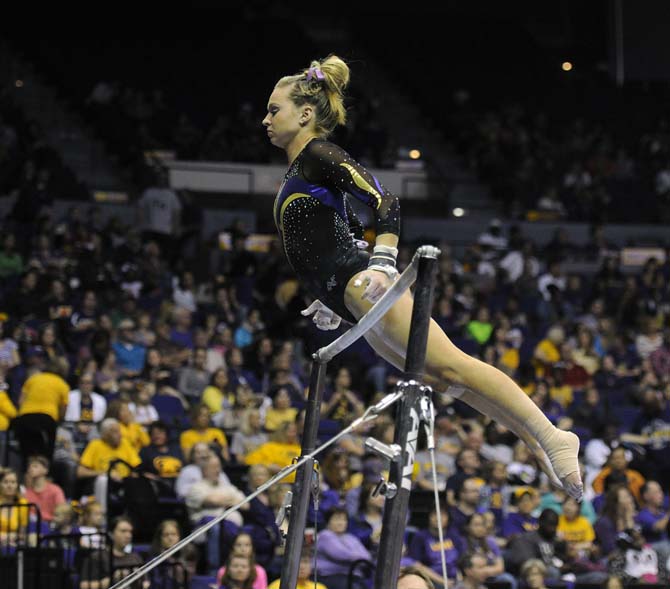 LSU junior all-around gymnast Rheagan Courville ends her floor routine Saturday, April 5, 2014 during the NCAA Gymnastics Regional in the PMAC. LSU won the regional with a score of 198.325.

The LSU gymnastics squad had much to celebrate after its record-setting performance in the NCAA Baton Rouge Regional on Saturday.

The Tigers tied the nation’s highest score of the season Saturday with a school-record 198.325 to capture their second consecutive regional title and stamp the program’s 25th ticket to the NCAA Championships beginning April 18 in Birmingham, Ala.

But the excitement from what was perhaps the greatest night in the program’s history came at a steep price when senior all-arounder Kaleigh Dickson suffered an injury to her right foot Saturday during her vault.

Dickson said an MRI on Monday revealed she partially tore her plantar fascia, the tissue that connects the heel bone to the toes and creates the arch of the foot.

Now Dickson, who earned 2014 Second-Team Regular Season All-American honors as LSU’s leadoff gymnast, will likely be limited to two events for the NCAA Championships, and LSU coach D-D Breaux will be forced to tap into her squad’s depth.

But Dickson said she doesn’t expect her injury to be a distraction for the squad because she firmly believes her teammates are able to overcome it.

“We have deep lineups for this reason, and any one of those girls is more than capable of delivering a great score,” Dickson said. “And that’s what a great team is — having multiple people that can go in and score just as good as the next person.”

Now that Breaux knows the extent of Dickson’s injury, the task will be finding who’s best-suited to replace her in floor and vault, the two events she’s unlikely to compete in.

Junior all-arounder Rheagan Courville, who earned a share of the vault title at regionals with a 9.950, is certain that whoever steps in will adequately fill the void because Dickson has set the example for the squad all season.

“[Dickson’s] been perfectly consistent and a rock for us all year, and she’s really instilled that in everybody,” Courville said. “I think anybody who goes in will embrace her role and try to do the same she’s been doing all year. And we have people who can do that.”

A likely candidate to replace Dickson is junior Britney Ranzy, the Oregon State transfer who filled in for Dickson on floor in regionals Saturday. Ranzy scored a 9.800 on floor before posting a 9.900 on vault, and she said competing at regionals helped her realize she’s capable of delivering for the Tigers.

“After doing regionals, it was just a boost of confidence for me,” Ranzy said. “Going into nationals, I know now that not only can I hit a set, but I can feel confident about hitting that set.”

But finding another gymnast to fill in isn’t the only task — finding the appropriate gymnast to take Dickson’s leadoff spot will also be a key factor for LSU.

Fortunately for the Tigers, junior all-arounder Jessie Jordan is expected to pick up the mantel. As the team’s beam anchor, Jordan is adept at performing in pressure situations, and she doesn’t plan to treat the role of tone-setter any differently.

“Of course, there’s a little more pressure because you want to be that person to start off the lineup well,” Jordan said. “But if that’s another role I’m given, I’m just going to take it and roll with it.”

Luckily for Dickson, her injury won’t keep her completely sidelined. She’ll be able to contribute to LSU’s final push for a national title on the uneven bars and possibly beam, and the strong-willed Dickson is determined to make the most of her limited opportunity.

“I’m going to try to do as much as I can because this is my sport, and I want to finish strong,” Dickson said.

Variably cloudy with scattered thunderstorms. Low near 70F. Winds NNW at 5 to 10 mph. Chance of rain 40%.