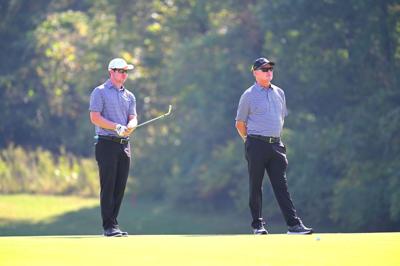 “Shoot!” Chuck Winstead told Trey, his son, on a hunting trip. “If you’re going to shoot this thing, you got to do it fast.”

At the time, Trey Winstead was in the fifth grade and had never had a successful hunting trip. Previously that day, he was battling hunters’ fatigue and struggling to stay awake. With guidance from his father, they both would celebrate the first of their many achievements.

Chuck’s advice to Trey has always been present and will never deteriorate. They share in a relationship that has expanded through many levels of life.

Chuck and Trey Winstead fully embody what it means when we so often try to describe life in Louisiana. They both are extraordinary people who relish in the spirit of the purple and gold and hold true to the very faculties LSU enshrines.

Chuck Winstead grew up in Ruston, La., and has since called Baton Rouge home. For him, Baton Rouge has been a safe haven where the complexities and worries of life seem to dissipate in the humidity.

He chose to attend LSU and play for the golf team where he knew the school’s spirit was not lacking and the passion for success would help him secure success. He would be an intrinsic asset to the team in his playing days and later would go on to concentrate on becoming a better instructor. Chuck had developed a passion for the sport of golf from his grandfather who taught him how to play. Similarly, Chuck would, in turn, do the same for his son, Trey.

Chuck and his wife, Jennifer have two sons, Trey, a senior at LSU, and David, a freshman at Texas A&M.

“The last thing I wanted to do is pressure them both into playing because of me,” Chuck said. “I think it’s a testament, one of them plays and the other occasionally hits a few balls. I am equally as proud of both of them.”

For Chuck and Jennifer, they have found simplicity and peace through the teachings of the church. One of the first things they decided on when they came to Baton Rouge was to get involved in the First Methodist Church, where they are still active participants. To their pleasure, their sons have taken life with the same regard.

Trey said that with his aspect of faith, it is evident that his results on the golf course or his success in life are irrelevant to define who he is. Trey has spearheaded several Zoom bible studies throughout the pandemic so he and his teammates can continue to live life in faith.

“With the grace we receive, we can forgive and love one another,” Trey said. “I have found that we are called to a bigger purpose through Christ, not just being great at golf.”

For the Winstead’s, faith is penultimate for their relationships, and it’s how they can maintain an unparalleled connection.

“Faith and family are everything… absolutely everything.” Chuck and Trey’s answers echoed one another’s.

The golf crazed duo has the discipline to turn off the conversation revolving around golf when they are around their family. When asked if a prior day’s practice or lesson is discussed at home at the family dinner table, the answer was no. They are both tremendous assets to the game of golf especially here in Baton Rouge, but they recognize that their family is the meat of their life.

Coach Winstead has always been around the game of golf and has raised his family while involved. There is a story of Trey walking from his family home to the golf course in the fifth grade and fine-tuning his game.

“I remember seeing Trey come out the course when he was this high [hand gestured to what seemed just under 4’2] and have witnessed him develop into an absolutely tremendous man,” a volunteer worker at the University Club said. “He would practice all the time, often being the last person to leave, and now not much has changed, except for maybe his height.”

The now 5’11 senior has made his mark on LSU and collegiate golf. Although he is not too concerned with his results and focuses on how he can get better, Trey started in all three tournaments this fall and has been a crucial leader for the team. Trey has also had an explosive individual summer recently. He was in contention in three major junior tournaments nationally.

Trey has discussed he does have visions to continue his golfing career as he matures, but for now, he is loving the ability to share these moments with his father and coach.

The coach was jubilant that Trey decided to play for the purple and gold, but to him, Trey is another player. Conversely, the coach rebutted any claims that there has ever been any form of special treatment towards Trey.

“He has to earn everything he gets, the same as everyone else,” he said. “Trey has proved himself in qualifiers and throughout his performances to gain his playing time.”

While discussing the dynamics the Winstead’s exhibit between player and coach and son and father, it can be analogous to the story of Cormac McCarthy’s “The Road.” A father and son embark on a dystopian future wasteland and under the father’s leadership and guidance, the two remain faithful to their values. During their journey, perils and adversaries are confronted head-on and together through love and faith create their own peace that would ultimately forge an unending relationship. For the Winstead’s, Trey has “carried the fire.” Fire at its bare essence is light and warmth, but taking on a deeper position in Winstead’s case it is so much more. It resembles charity, kindness, forgiveness and the ability to love unconditionally.

“[Coaching Trey] is the coolest thing. It’s a blessing,” Chuck said. “He is a tremendous man capable of everything.”

Throughout the LSU men’s golf team, among several phrases that are uttered, the two that stand out have been adopted from Coach Winstead. Similarly, to the football team’s win bar, the golf team has revolved around the motivational line of “No ceilings,” which would not be proper to hang upon a doorframe that is close to a ceiling. This is an outward message that they should never limit their successes and always realize they are capable of their dreams.

To be a college coach of any sport, one must be fully invested in the betterment of the whole team. This is something Chuck learned during his time playing for the Tigers. Additionally, he has learned this through his life experiences with his family.

Too little, too late for LSU men's golf in final tournament of fall season

“It is awesome to coach for my alma mater, but it pails to what faith and family mean to my life,” Coach Winstead added. “I want my family to know I love them, true love is not fake, it is when I see my boys going through a hard time and I am able to offer advice or challenge them I do it out of love.”

Golf holds a special spot in the Winsteads’ life. Like so many others, it is a form of connection to special people in their life, but the way they are able to share in celebration and learn from defeat is unique and essential to understanding their relationship.

Similarly, to hunting, golf is an individual sport, a player and his mental will to succeed. When playing golf or going through life it is necessary to have someone to tell you to “shoot.”

“Yes he is my father, yes he is my coach,” Trey said. "But ultimately he is my best friend.”

LSU men’s golf Philip Barbaree announced Wednesday that he will leave the school a semester early to pursue his professional career, according…