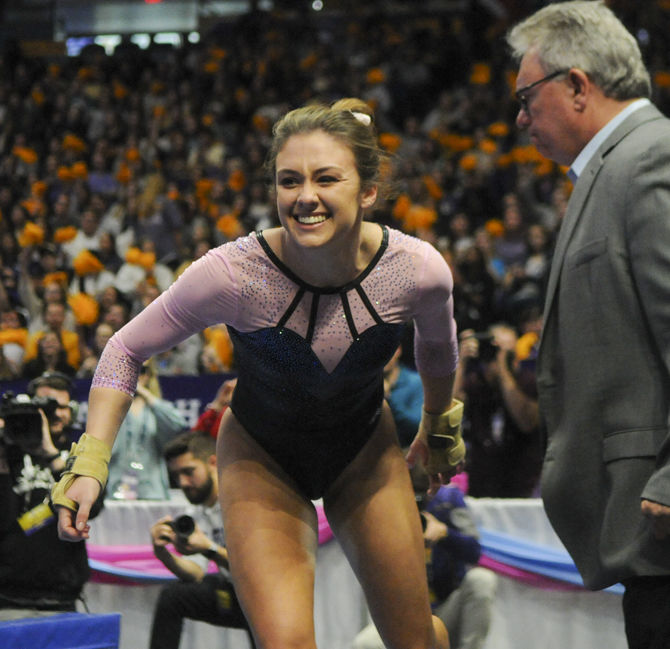 LSU all-around senior Ruby Harrold celebrates with LSU gymnastics coach Bob Moore during the TIgers 196.575-196.275 win against the Auburn Tigers on Friday, Jan. 17, 2020, in the PMAC. 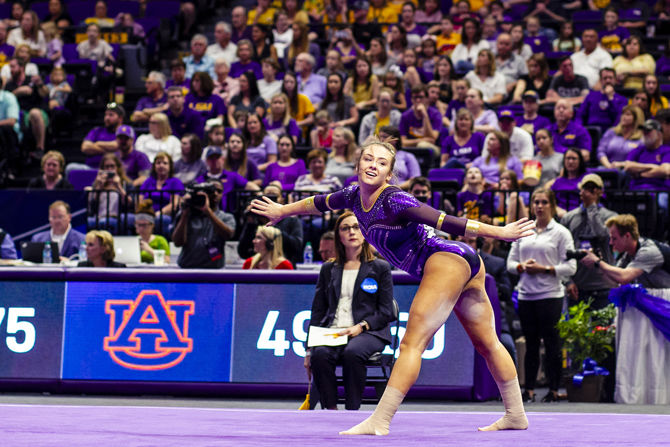 LSU junior all-around Ruby Harrold performs a floor routine during the second round of the gymnastics regionals on Saturday, April 6, 2019, in the PMAC.

Ruby Harrold is pretty sure she cried when she first came to LSU on her official visit. No, she’s positive she cried.

It was overwhelming for the senior all-arounder all those years ago — the pomp circumstance and atmosphere of the LSU gymnastics program that has been led by D-D Breaux for the past 43 years.

“The whole family integration of a team, the interactions between the coaches and the gymnasts where the coaches treat the girls like adults and not just like athletes,” Harrold said. “I knew that this whole thing was something that I wanted to do. It wasn’t a case of me trying to figure out what school I wanted to go to.”

LSU gymnastics has a history of powerful members coming in as freshman and making big contributions and 2020 is no different.

Co-head coach Jay Clark convinced the former Great Britain Olympian to take a shot at LSU. Harrold met Clark when she and her elite coach went to a training camp with former Tiger gymnast Lexie Priessman in 2014.

Harrold and Clark stayed in contact and Clark persuaded her to visit LSU. The rest was history.

“Jay showed enough interest in me as a person, which was very flattering so I said ‘Let’s do this thing,’ and I ended up here two years later,” Harrold said.

After three years in Baton Rouge — with three Super Six/Final Four appearances and two national runner-up titles — Harrold has become ingrained in Louisiana culture while helping lead the Tigers during her senior season.

Coming to a new country was enough of a change for Harrold, but coming to a place as unique as Louisiana presented a different set of difficulties, but Harrold wasn’t too phased.

“Definitely just the way of life, the culture, the food (is different), but I’m not picky so it doesn’t really matter,” Harrold said. “People’s demeanor, like everybody is so friendly. Just learning the way of life and how things roll around here. It was challenging, but I’ve learned a lot.

“I like crawfish a lot. Your typical jambalaya, gumbo. I’m a fan of etouffee.”

The food in Louisiana was the easy part, but learning about football, on the other hand, was not.

Harrold said people in England don’t love sports the same way as in America, especially when it comes to collegiate athletics.

While her father is from Liverpool and supports the city’sPremier League team, Harrold is not big into sports. She admits to not really understanding American football until last year.

“I was just here for the fun honestly, the songs and all,” Harrold said. “I understand you have to get the ball from this side to this side, but that’s the extent. I never knew why they stopped, why they started, why you kick the ball, why you run with the ball. I always find myself, instead of watching the field, I would watch the screen because I would lose where the ball was. I had no idea.”

For all Harrold learned outside of the gym during her time at LSU, adjusting to the culture and atmosphere, she has become somebody that can lead the Tigers with a certain level of care and attention in 2020, said coach D-D Breaux.

Breaux said the maturity and the seriousness with which Harrold carries herself through everything, from her academics to her social life, is a bonus for the Tigers because of what she’s done and accomplished on the floor.

“I’ve seen her become very serious about her academics and not that she wasn’t when she got here, but I think she has a plan and a direction and a vision and that’s critically important when you’re in school and when you’re pursuing your dreams,” Breaux said. “If it’s a real dream and it’s attainable, I think she’s created that for herself. I think she knows where she wants to go and what she wants to do.”

Her maturity and experience and ability to lead is vital for a young, inexperienced LSU team.

“She’s very nurturing,” Breaux said. “Sometimes the coaches aren’t nurturing, sometimes we’re hard and we push and are demanding. Ruby is the one behind them going ‘You got this. Come on, move forward. This is what we do and how we do it.’ She’s been extremely nurturing to a really talented freshman class.”

Despite high praise from her teammates and coaches, Harrold downplays her importance to the freshmen’s development, while still doing all she can to help them along the way.

She knows how difficult it was coming in as a freshman and trying to figure out how everything that encompasses college gymnastics on her own. She wants to prepare this group for what to expect and how to adapt smoothly.

“This isn’t something you can teach,” Harrold said. “It was difficult for me freshman year because I came into this big bubble that I really had no idea about. My seniors were great, but I felt like I lacked being told things that I really didn’t know I needed to know.

“Just to make sure that they know what they’re doing and that if you make a mistake it’s fine. It’s not the end of the world, it’s only gymnastics. I feel like

making sure that they know that it’s going to be OK and we’re going to figure it out and we’re here as a team and it’s not an individual thing anymore is cool. Just teaching them that through this whole thing.”

This whole thing will come to an end for Harrold in April.

And come graduation in May 2020, she will hang up her leotard and “just do Ruby.”

“It’s maxed my expectations,” Harrold said. “I knew this whole thing was fun, but I didn’t know how fun. And I still get to do what I grew up with, but I also get to prioritize my academics and get a degree out of it. I couldn’t get more happy for that to (LSU) to care afterwards as well, not just what you’re doing for these four years.

“I wouldn’t change it for the world. I wouldn’t have wanted to go anywhere else. It’s been rocky, and it’s been bumpy, but that’s a part of the journey. You don’t grow if you don’t go through stuff like that.”

'We know what we have': LSU gymnastics confident going forward, despite early struggles

The LSU gymnastics team has been known for its high level of competition from start to finish.