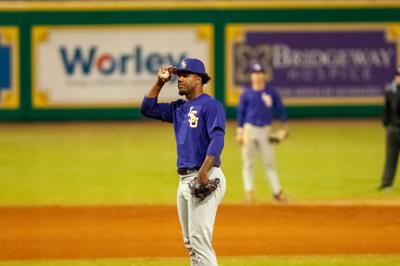 It feels like a common refrain at this point, but Jaden Hill is really good at this pitching a baseball thing.

From the way he boldly toes the rubber, to his powerful fastball complementing his filthy breaking pitches, to the strut off the mound after a big strikeout like in the first inning of LSU’s 6-2 win over Youngstown State, Hill just oozes confidence. He has a certain swagger, and with laced-up Jordan cleats to go with his incredible performances, he has become one of the funnest pitchers to watch in college baseball right now.

“I can’t wait until next week,” Hill said regarding how his approach to playing has fueled his energy. “It’s just every single weekend, going through the same process, learning my body throughout the week, changing programs sometimes, just kind of depending on my feel. It’s all a process and I love it. I just get to figure more about myself and add things.”

Hill allowed just one hit, two baserunners (one reached on error) and no runs to keep his ERA at pristine triple zeroes. He struck out four in his longest outing of his career of six innings and did so on just 77 pitches. His efficiency was a crucial part in keeping the LSU pitching staff in good shape for Saturday’s doubleheader as well. Keeping his pitch choices diverse and staying ahead in counts was an important factor in ensuring that outcome.

“If a guy’s wild, and he strikes out a lot of batters, then he may not be able to go deep in the game, because he runs his pitch count up so high,” Head Coach Paul Mainieri said. “But Jaden shouldn’t do that. He throws so many strikes, and he mixes his pitches well.”

With those lively fastballs and deceptive off-speed pitches, Hill kept the Penguin batters off balance all night, giving his defense plenty of opportunities to make plays. They converted on the majority of them, turning 15 live balls into outs for their starter.

“Man, they made me not scared to throw any pitch,” Hill said. “I feel I can throw the ball right down the middle and no matter where they hit it, those dudes can make a play.”

A huge contributor to that defensive effort was first baseman Tre’ Morgan. In the top of the sixth, Morgan made three unbelievable plays in a row to retire the side: first with a quick snatch of a low throw from Jordan Thompson out of the dirt, then with a falling backwards catch in foul territory and finished off with a tiptoe play to keep his foot on the bag on a heater of a throw by Hill himself. It was the embodiment of the defensive performances all night that allowed Hill to be as efficient as he was.

“When I came off the field, I was smiling because I knew I just did something pretty special,” Morgan said. “I knew I had a good inning.”

Morgan’s defensive impact is making a difference for everyone on the infield. It seems like the freshman can do it all, from stretching to keep wild throws in front to making magical grabs when the ball is coming in hot and low.

“If our infielders just get it somewhere close to him to give him a chance, I expect him to pick every ball,” Mainieri said of his star freshman. “I think his father worked with him all his life, but it just looks so instinctive to me.”

Of course, in order to get Hill his second win of the year, the offense would have to score some runs. Thanks to four home runs from the Tiger bats, he got all the run support he needed. Cade Beloso, Cade Doughty, Gavin Dugas and Zach Arnold plated all six of LSU’s runs with the long ball.

“I think no matter when Jaden’s on the mound, no matter what he does, I always think if we get one or two, maybe three runs, the game is over with no matter what,” Dugas said. “I have complete and total trust in him.”

Hill felt the pressure of his coach about to pull him early in order to keep him in good shape for the entire season. Mainieri told him in the dugout before he took the mound in the sixth that he had better have a good inning, or else he would have to come out and take the ball from him in the middle of the inning since he was reaching his preset 75 pitch limit. Sure enough, Hill pitched the sixth like he had pitched every other inning tonight, with fewer than 20 pitches.

“He basically said I was going to get embarrassed by him coming up and pulling me off the mound, and my pride is too big for that,” Hill smiled.

“I think, that challenge, he took it to heart,” Mainieri said with a smirk himself.

With the offense in a groove, the defense shaping up and the pitching staff delivering quality performances, it’s no wonder Hill’s last sign off after the game was a giant grin.

“Preciate y’all!” he said with the big smile and two peace signs, running off to enjoy the evening with his teammates.

Shut down pitching and long ball power LSU past Youngstown St. and Nicholls

Doubleheaders are known to put a baseball team’s pitching depth to the test. A typical pitching staff is rarely up for 18 innings in one day, …

A few clouds. A stray shower or thunderstorm is possible. Low 63F. Winds ESE at 5 to 10 mph.

Cloudy in the evening, then off and on rain showers after midnight. Low around 55F. Winds NE at 5 to 10 mph. Chance of rain 40%.