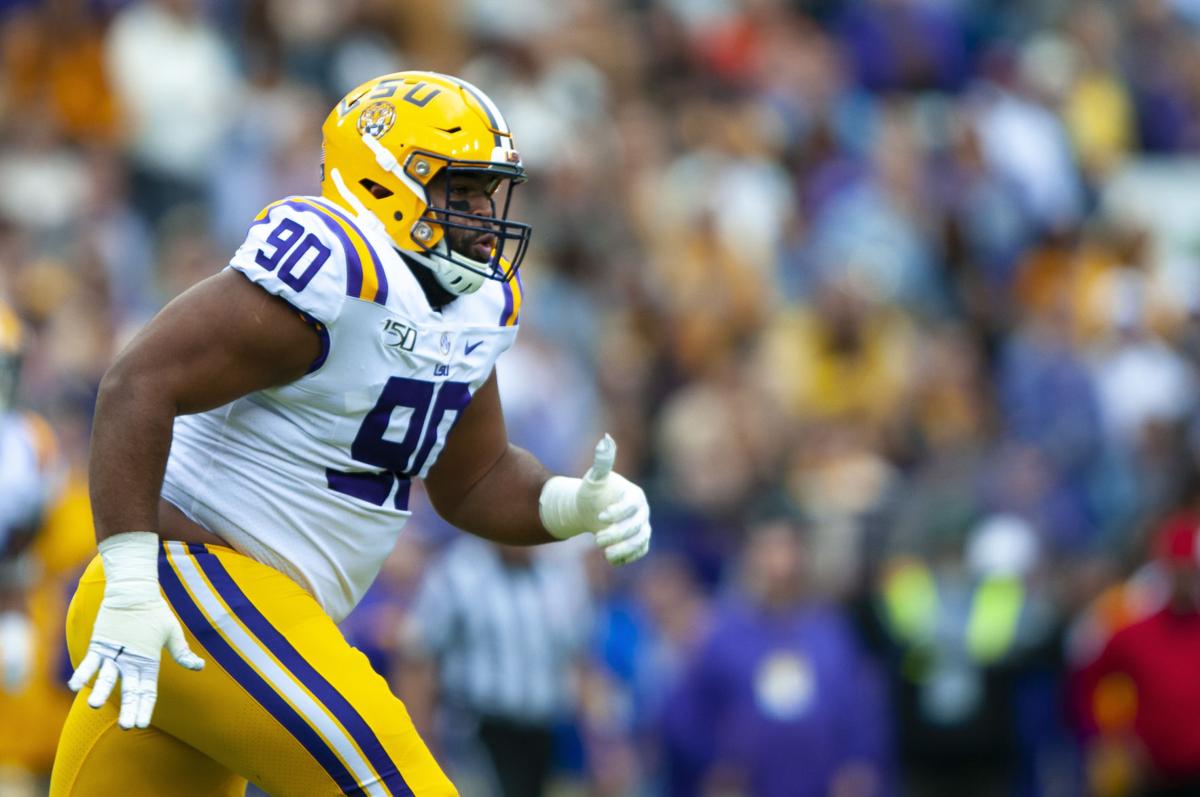 LSU senior defensive linemen Rashard Lawrence (90) runs down the field during the Tigers’ 23-20 victory over Auburn on Saturday, Oct. 26, 2019, in Tiger Stadium. 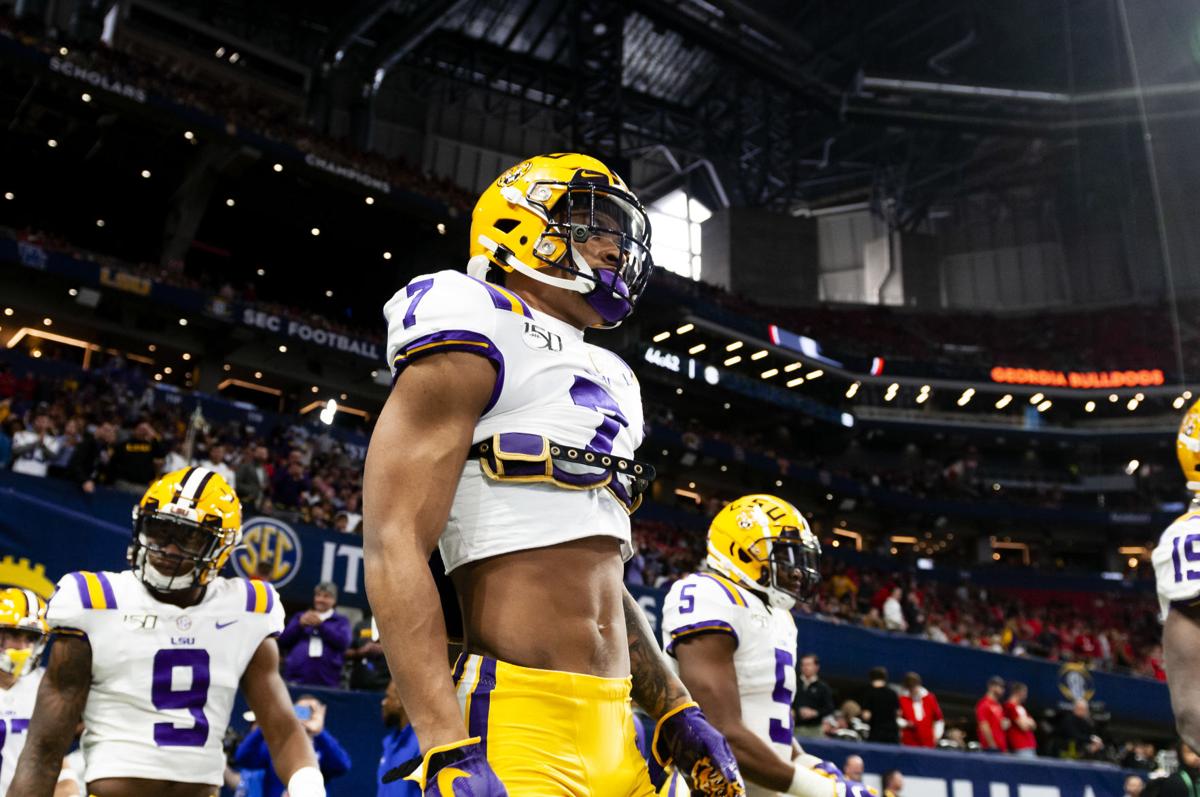 LSU junior safety Grant Delpit (7) warms up before enters the stadium before the Tigers' 37-10 victory over Georgia on Saturday, Dec. 7, 2019, in Mercedes Benz Stadium. 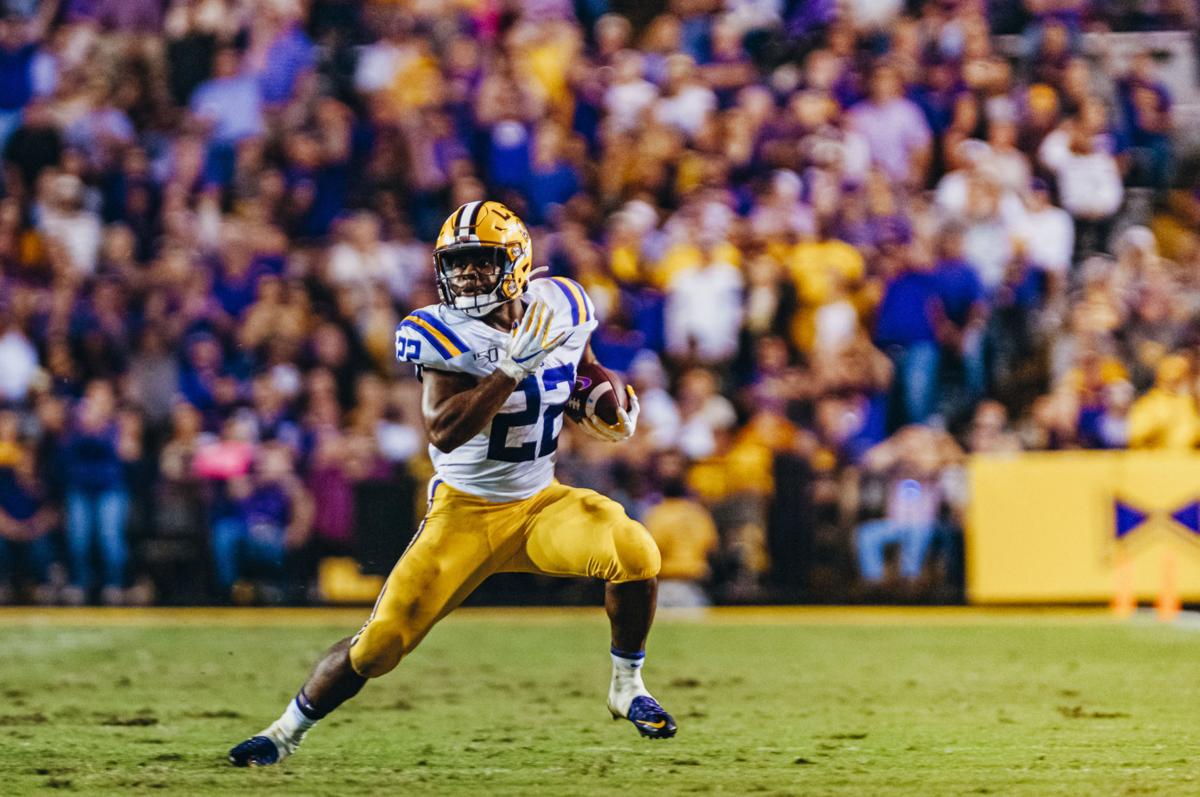 LSU junior running back Clyde Edwards-Helaire (22) rushes the ball during the Tigers' 50-7 victory over Texas A&M on Saturday, November 30, 2019.

LSU senior defensive linemen Rashard Lawrence (90) runs down the field during the Tigers’ 23-20 victory over Auburn on Saturday, Oct. 26, 2019, in Tiger Stadium.

LSU junior safety Grant Delpit (7) warms up before enters the stadium before the Tigers' 37-10 victory over Georgia on Saturday, Dec. 7, 2019, in Mercedes Benz Stadium.

LSU junior running back Clyde Edwards-Helaire (22) rushes the ball during the Tigers' 50-7 victory over Texas A&M on Saturday, November 30, 2019.

During Rashard Lawrence’s recruiting, Coach Ed Orgeron, then LSU’s defensive line coach, sat in the defensive lineman’s living room and told Lawrence he would be a team captain on a national championship team.

It’s common for coaches to say things like that during recruiting. Let the players know all the things they can accomplish at any particular school. But three games into Lawrence’s freshman season, former head coach Les Miles was fired and in his sophomore season the Tigers lost to the Sun Belt’s Troy. It looked like LSU might not reach the highest peak of college football.

But now, just two years after the loss to Troy, LSU is one victory away from being a national champion, and that conversation between Lawrence and Orgeron in a living room in Monroe could become a reality.

“Me and Coach O, we talked about a national championship,” the senior recalled. “He always tells the story. I was like ‘Yeah, OK,’ because I didn’t think it was going to happen the way it’s happened. To finish it up in New Orleans, it’s going to be special.

“It’s special. We’ve just got to finish the job and prepare how we’ve been preparing. Anytime you can do something like this, it’s a special opportunity.”

Now, Lawrence is a 2019 LSU Permanent Team Captain and will be playing for the National Championship against Clemson on Monday night.

Orgeron and multiple LSU players have said that once they realized the game was going to be in New Orleans in the spring, they knew they had to do everything possible get there.

“I think that was the talk amongst us, just know we were going to be – just have the opportunity to get here,” said LSU safety Grant Delpit. “I think we tried to do all we could to get here, and we did that. So like I say, can’t write it up any better. Hopefully get out of this thing with a win.”

When the LSU Tigers step on the field Monday night in the Mercedes-Benz Superdome, it will be the culmination of all those things Orgeron said so many years ago. The fact that it’s in New Orleans just means more to Lawrence and his teammates who have seen the stadium as a pinnacle of Louisiana football.

“It’s very familiar,” Lawrence said. “I had great success there. I enjoyed it. It was just fun playing there. We played BYU there (in 2017), but this one is going to be a little different. I’m expecting basically a home game, 90 percent LSU. I know Clemson is going to travel well, but I’m expecting a home game.”

Lawrence played in the Superdome twice during high school, leading Neville to Class 4A state titles in 2014 and 2015.

Later that same weekend in 2015, LSU running back Clyde Edwards-Helaire was named the 2015 Class 5A Championship MVP when he led Catholic High to a victory over Archbishop Rummel, where LSU defensive back Kristian Fulton was playing on the opposite side of the field.

“For me it’s more of a full circle.” Edwards-Helaire said. “Junior year, Catholic High, state championship game, last game of the season. Junior year of college and National Championship game. You know, this one is more important right now because it’s the moment ahead of me, so I’m more excited about this one. I mean I wanted to be in this situation when I signed that letter of intent, and now I’m here.”

Though many LSU players played high school football in Louisiana and had the opportunity to play in the Superdome if their school made it to the state title game — from Lawrence, Edwards-Helaire and Fulton to Patrick Queen and Trey Palmer — LSU junior safety Grant Delpit did not.

While Delpit grew up in New Orleans East, he and his family were displaced after Hurricane Katrina in 2005. The Delpits went to Memphis before settling in Houston where Delpit attended Lamar High School for three years before transferring to IMG Academy in Florida for his senior season.

“When I came to college they actually moved back, so they live here now,” Delpit said. “Just making them happy. Seemed like national championship being in New Orleans, it really came full circle. Just trying to make them proud, man. That’s all it is. Just trying to do it for Louisiana.

Few teams get to play for a national championship in their own state. This is the fourth time LSU has done so since 2000.

Orgeron said LSU doesn’t need extra motivation, but he emphasized that playing in New Orleans makes it mean more to his guys.

“It’s very special, especially with my family, just all my family being here,” Delpit said. “So just playing at home and just playing in front of the home crowd, doing it for Louisiana, man, you couldn’t write it up any better.”

To get to where the LSU Tigers Football team is now, you have to go back eight years to Jan. 9, 2012. Few LSU fans or players enjoy recalling …