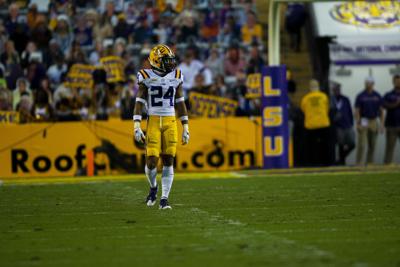 On Saturday against South Carolina, LSU took advantage of its surprise week off and bounced back from its embarrassing loss to Missouri. The Tigers beat the Gamecocks 52-24.

Early in the first quarter, it seemed for a moment that the LSU defense would repeat the same mistakes that plagued the unit through the first three weeks of the season. Another week, another day of miscommunications and confusion that would lead to huge gains and turn the game into a shootout.

The Gamecocks opened the contest with a three-play drive. On the first play, South Carolina wide receiver Shi Smith took a jet sweep and bounced outside after LSU safety JaCoby Stevens broke contain and crashed inside. Smith gained 36 yards.

On the third play of the drive, Kevin Harris took a handoff to the left. Damone Clark shot a gap, and Ali Gaye crashed inside. Harris bounced outside. 45 yards later, six points were on the board, after he ran untouched for 45 yards.

It was a familiar sight for LSU fans, who have grown accustomed to seeing their defenders confused and on different pages this season. Either Clark or Gaye had to seal the edge, but they both ran inside, leading to the huge touchdown run. Four South Carolina passes gained over 30 yards, and four runs tallied over 20 yards.

After the game, linebacker Jabril Cox pointed to “little mishaps,” such as linebackers who missed gaps, that led to those

chunk gains. He said the team made adjustments along the

defensive line that helped the unit clean up mistakes through the rest of the game. He believes that LSU’s tendency to allow huge plays can be fixed when the team is more focused and prepared.

“Were we perfect tonight?” Ed Orgeron asked after the game. “No, we have a lot of things still to shore up on defense, especially in our coverage. Guys were running wide open. We still got to continue to fix it.”

Against South Carolina, the defense was better, slightly improved from the historically bad unit that in its first three games, allowed 96 points, the most through the first three games in program history. Missouri passed for 596 yards and gained a robust 8.6 yards per play on LSU two weeks ago. On Saturday, South Carolina quarterback Collin Hill, after an explosive start, completed only 12 of his 22 passes for 234 yards.

Orgeron repeatedly said that he was happy with the pass rush but not so pleased with coverage in the secondary.

In freshman pass rusher BJ Ojulari, the Tigers have a budding star and a pass rusher of the future. Saturday was his breakout game when he recorded three sacks. Through four games, he has four sacks. For context, LSU’s 2019 sack leader, K’Lavon Chaisson tallied 6.5 sacks in 13 games.

“I thought our pass rush was outstanding,” Orgeron said. “Led by BJ Ojulari, what a tremendous freshman.”

Part of that uptick in sacks is a product of a shift in defensive philosophy from new Defensive Coordinator Bo Pelini. He and Orgeron want to rush the quarterback more often, and they’ll send the scary trio of Ojulari, Ali Gaye and Andre Anthony to accomplish that goal.

On Saturday, the defense showed that if it makes only slight improvements and helps the high-powered offense, the team can meet expectations set before the season and crawl itself out the hole it dug during the first three games of the season.

A gauntlet of SEC opponents is next, with Auburn up first.

Ask running back John Emery, and he’ll stress the importance of this win. South Carolina beat Auburn, he said, and LSU beat South Carolina. Apply logic to this crazy, backwards, topsy-turvy season at your own risk. After game four, Emery and the Tigers are willing to take that risk.

“We really needed this win.”

The LSU football team returned to Death Valley after last week’s game against Florida was postponed to Dec. 12, a week before the SEC champion…

Rain. Potential for heavy rainfall. Low around 60F. Winds ENE at 5 to 10 mph. Chance of rain 100%. Rainfall possibly over one inch.

Rain. Potential for heavy rainfall. Low around 60F. Winds ENE at 5 to 10 mph. Chance of rain 100%. Rainfall possibly over one inch.