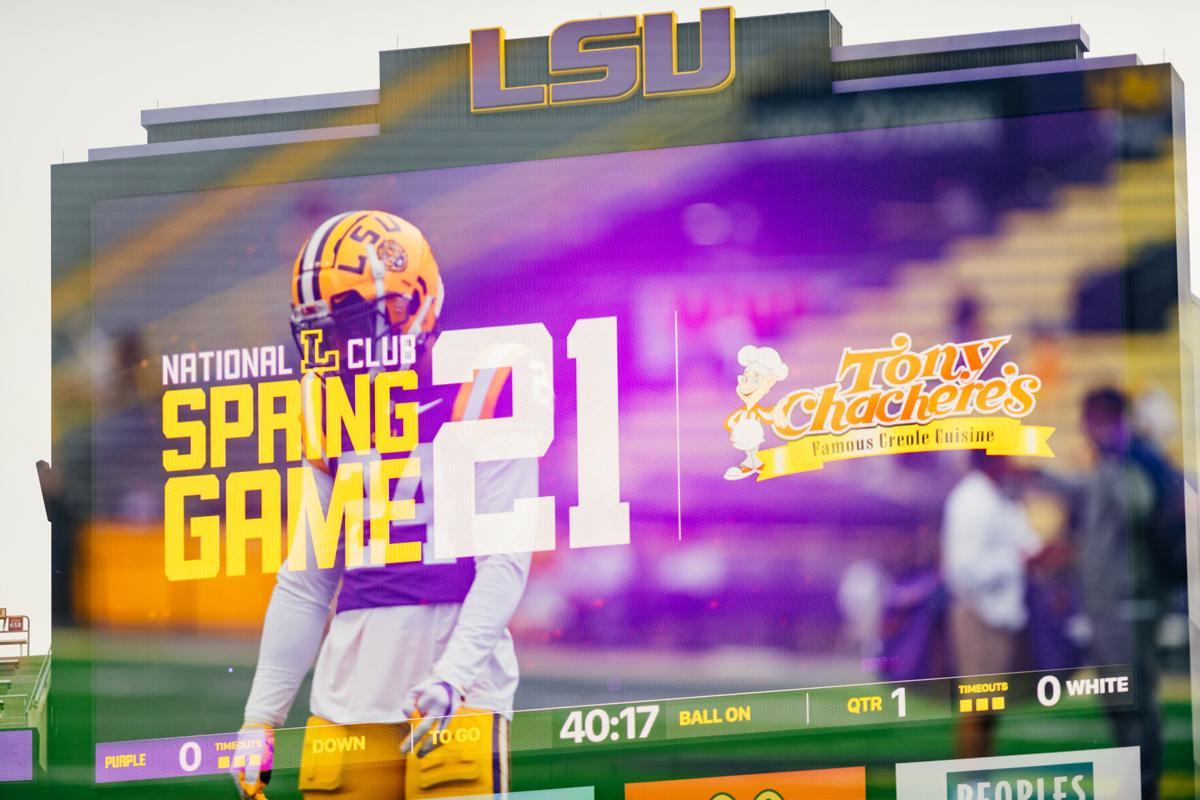 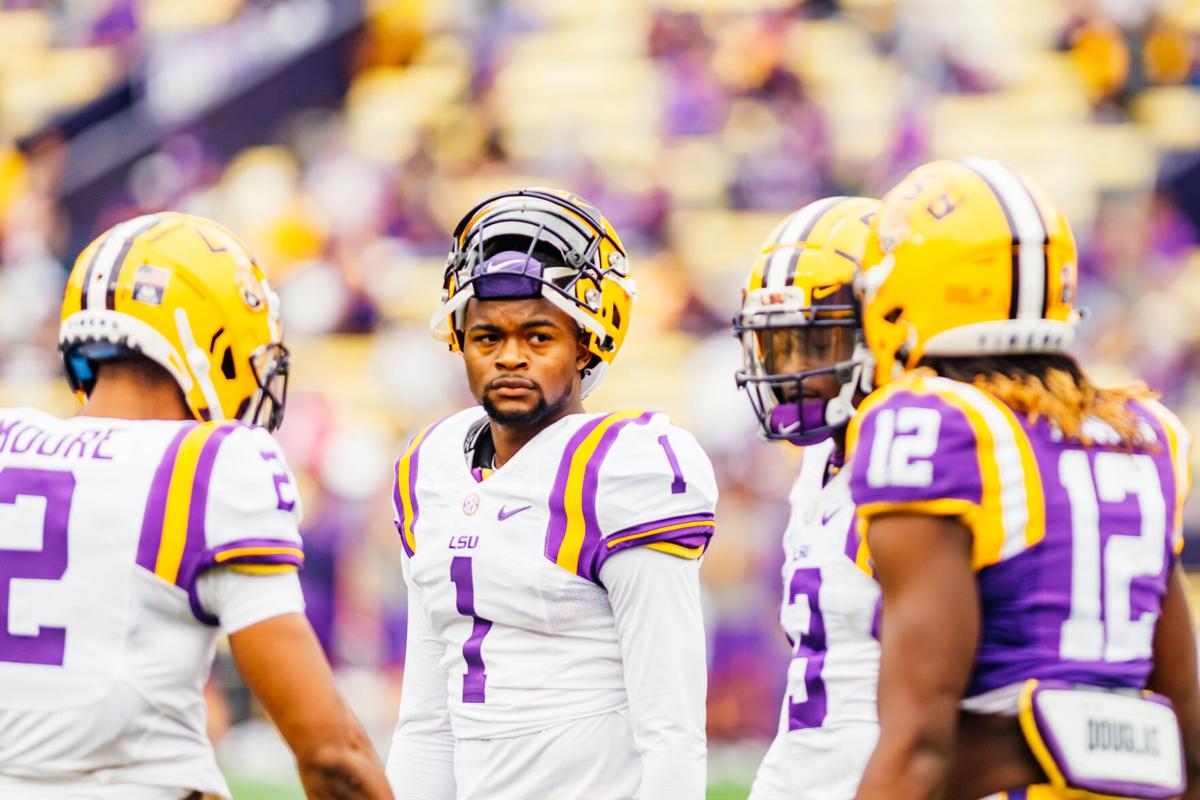 LSU football sophomore wide receiver Kayshon Boutte (1) looks at his team before the start of the game Saturday, April 17, 2021 where the LSU football white team defeated purple 23-14 during their spring game at Tiger Stadium in Baton Rouge, La. 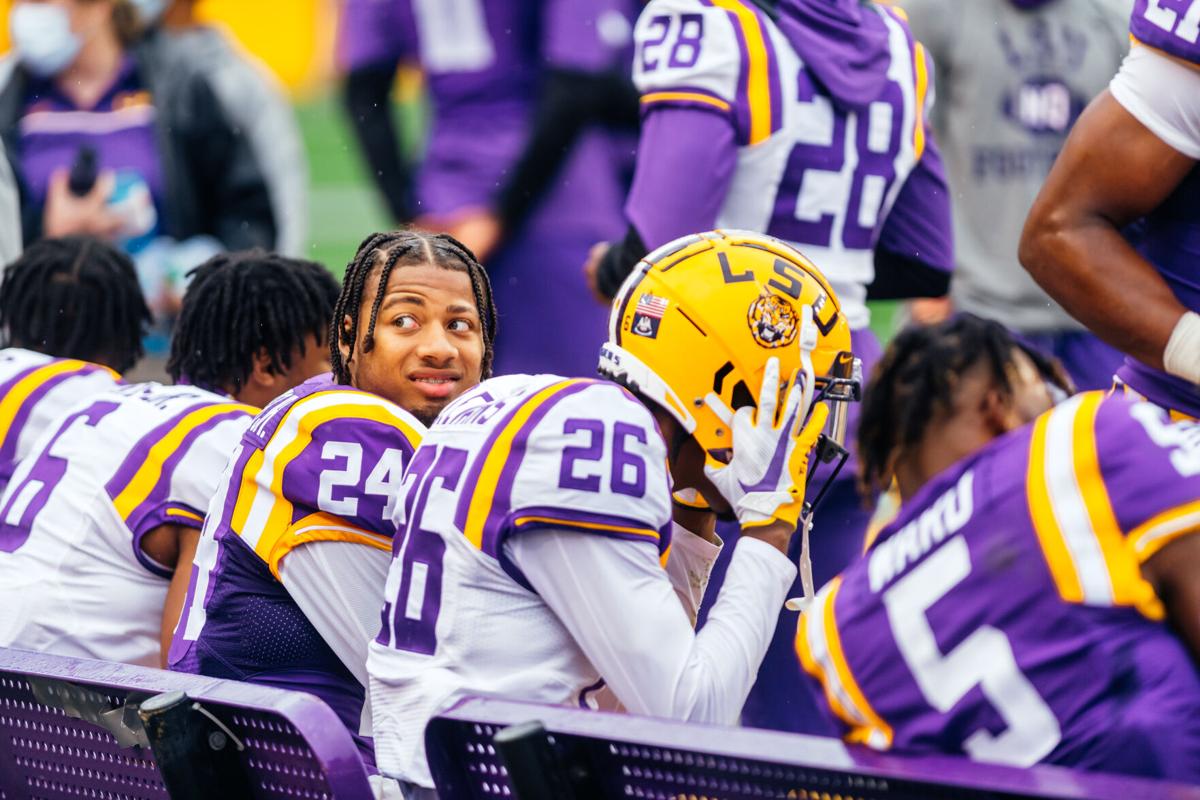 There were many questions surrounding the LSU football team heading into the spring game: some that were answered, and some that weren’t. These included questions regarding quarterback competition, defensive improvement and offensive weapons other than wide receiver Kayshon Boutte.

In terms of quarterback play, it seems like two quarterbacks, Myles Brennan and Max Johnson, currently lead the charge to take the starter job in terms of statistics and efficiency.

It’s hard to tell based on the numbers, but each quarterback displayed a lot of potential and smarts, rarely making mistakes. Boutte had a lot of praise for his quarterbacks, calling the room the best quarterback room in the country and citing chemistry as a reason for it.

“All of them are getting better at times, we all are working on things, running off everything together,” Boutte said. “We’re all together. I think they played good as a quarterback room.”

The other question LSU fans had related to their offensive attack was whether or not Boutte would have to carry the majority of the load for the squad. Boutte might have talent comparable to Ja’Marr Chase, but that 2019 team would not have been on the same level without Justin Jefferson or Terrace Marshall Jr.

All that needs to be said is that it appears he won’t need to have 300-yard games for this team to win.

Boutte still had an incredible game (11 catches for 162 yards and one touchdown), but senior Jontre Kirklin actually outpaced him by a pretty modest margin. He had an insane 16 receptions, 209 yards and two touchdowns − a breath of fresh air for LSU fans everywhere.

It appears LSU has a solid one-two punch at wide receiver and Boutte agrees, believing his teammate to be underrated.

“He always did play how he did today,” Boutte said. “I honestly think he was slept on. He stepped up and showed that he could be a big wide receiver.”

With a strong quarterback room that contains clear starter-caliber players, solid weapons at the receiver and running back positions and an experienced offensive line, this offense has the potential to be a nightmare for defenses everywhere.

The question on everyone’s mind after seeing what the team did at the spring game is: how will it compare to the 2019 team?

Left tackle Austin Deculus believes they are on the same level already. When asked whether or not he’s seen reminders of the 2019 team from the current one, he responded with a confident “most definitely.”

“You see the long passes, you see the big runs and you see the energetic, fun offense that everyone grew to know and love in the 2019 season,” Deculus said. “We aren’t going to show everybody the little tools we’ve got up our sleeve right now. We’re just scratching the surface.”

We did see flashes of that last season, particularly in the last two games, but something that was not replicated last season that the team had the season before was the dominant defense that held Texas A&M to seven points and Georgia to 10 in 2019. But it was a completely different story on Saturday.

The final score was 23-14, which was much lower than most people expected. This was due to LSU’s defense forcing the offense into a lot of mistakes and at the end of the day; they amassed a total of six turnovers and eight sacks.

There are two huge differences between this defense and last year’s defense. One: the defense is a lot more experienced, with a vast number of the underclassmen who played last year having a year of experience and training under their belts. Two: they have a new leader at the helm, defensive coordinator Daronte Jones.

It was clear that things were much different during the spring game. The offense was able to pull off big plays, but coverage was incredibly tight throughout and the defensive line and outside linebackers made it into the backfield many times against a very experienced offensive line.

Ed Orgeron gave a lot of credit to Jones, calling him a very talented coach. He also mentioned a defensive back that has flown under the radar, Dwight McGlothern, and stated that their secondary was the most improved aspect of the spring.

McGlothern took Eli Ricks’ position due to Ricks being injured and had a solid game, outpacing every defensive back on the field in pass breakups with four. Once Ricks returns, this secondary will be lethal, sporting Derek Stingley Jr., Ricks, McGlothern, Jay Ward and Todd Harris Jr. at safety.

Couple that with some solid inside and outside linebackers, a strong, experienced defensive line and a solid defensive coordinator, and you’ve got the potential for one of the best defenses in the country.

There are a lot of unknowns that won’t be answered until the regular season begins, but Orgeron has put a lot of work into improving this team and the players have done their part. There is still a lot of time to train and a lot of work to be done. This team has the potential to erase the rough memories that amassed over the last season, but only time will tell.

Partly to mostly cloudy with widely scattered showers or thunderstorms possible later at night. Low near 70F. Winds ESE at 5 to 10 mph. Chance of rain 30%.