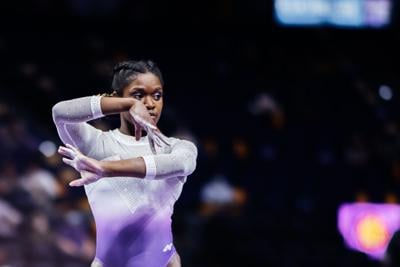 The LSU gymnastics team endured a bitter loss in the second session of the semifinals on Friday night in Fort Worth, Texas.

The team finished sixth overall in the championships and fourth at semifinals in Jay Clark’s first year as head coach after D-D Breaux left the program following 43 seasons. The Tigers put up an overall score of 197.5625, losing at a .525 deficit to top-scoring team Oklahoma. This will be the first time that the Tigers have not advanced to the championship round since 2015.

“That was a hard one to take,” Clark said. “It is obviously really disappointing, and the girls are hurting. We are all hurting. It will sting for a long time, but the future of this program is so bright, and we will use it as fuel to get better. This was a great team that did some special things. I would not want to be with anyone else on that floor tonight.”

Although LSU fans were disappointed with the loss, Haleigh Bryant’s vault title win gave them hope for the future of the program. The gymnast is only the second freshman in school history to earn an NCAA title and the seventh time that LSU has won the vault title, all under assistant coach Bob Moore, who has spent 22 seasons at LSU.

LSU opened the night with a stellar rotation on floor, finishing at 49.500. Senior Christina Desiderio started the event with a career-high 9.90. Freshman Sierra Ballard followed with the same score in her lone performance of the night, while Sarah Edwards kept the pace with another 9.90. Bryant scored an underwhelming 9.875, which was thrown out in the end. Kiya Johnson anchored the event with a score of 9.9125, her personal lowest floor score of the season.

The team then made its way to its strongest event, vault, for the second rotation. The Tigers had some great performances but somehow struggled to get bigger numbers on the board. However, they still pulled off a 49.5125 at the end of the event. SEC Vault Champion Elena Arenas could only manage a 9.8125, while Shchennikova scored a mediocre 9.8375. Notable scores came from Sami Durante, the sophomore Johnson, and of course, Bryant. The senior pulled a 9.875 for the team, while Johnson matched a season-high 9.95. The vault anchor finished the event with her fourth 9.975 to win the title.

Haleigh Bryant is in a class of her own. Her 2021 campaign has been remarkable, but that’s n…

The Tigers made a switch to bars, leading the other three teams with a half score of 99.0125. Nevertheless, fans did not rest easy as the Tigers headed into their two weaker events, bars and balance beam. All-arounder Johnson opened up the rotation at 9.85 with freshman Chase Brock leading up with her career-high 9.875. Freshman Olivia Dunne and Shchennikova had stellar performances, both earning 9.90s.

True heartbreak occurred during bars anchor Durante’s final performance. The senior opened the routine strong but struggled to make her second connection to the low bar halfway through the routine.

“She’s hurting pretty bad, coupled with the emotional hurt.” Clark said, “She did a pak salto, and from her second release from the high to the low bar, one hand slipped as she slid down the bar, caught her elbow, and smashed it pretty hard. I didn’t think she could finish, but she did.”

Durante took a moment to prepare herself to wrap up the routine. She finished with a half-in, half-out to stick a flawless landing and garner a 9.2500. The anchor has never recorded a score lower than 9.7 in her four years at LSU. The shock not only caused some emotional turmoil for the senior, but for the rest of the team as well. The energy and confidence from the Tigers seemed to drop as they headed into their final rotation of the night on beam.

“Sami doesn’t normally fall on bars,” Johnson said. “It was scary, and it rattled some people. I thought we got back in the zone, but I’m not so sure.”

Survive and Advance: Grit and mental toughness has LSU gymnastics competing for a national championship

Senior Desiderio kicked off the event with a low 9.725, her lowest beam score of the season by far. Bryant stepped in last minute for Durante, who was too injured from her bars performance to compete again.

As Bryant unexpectedly stepped into the all-around division, the North Carolina native pulled off a whopping 9.925, garnering LSU’s highest beam score of the night. Sophomore Schennikova, who wasn’t having the best night, continuously stumbled on the beam without managing to completely fall. Her score was later thrown out at 9.4375.

Bridget Dean scored her near-lowest beam score of the season at 9.8625. Refusing to crack under pressure, senior Reagan Campbell anchored the event with a steady and controlled performance but only received a 9.7750. The purple and gold closed out the meet with their lowest rotation score, a 49.1750.

As for the all-around division, Bryant finished in third place at 39.625, while Johnson came in sixth with a score of 39.600. The freshman claimed a new career-high on beam at 9.925.

At the climax of a season like no other, LSU gymnastics put up an elite showing on senior ni…

“It’s definitely an honor,” Bryant said. “In the back of my head, I wanted to win at nationals, though we focused on wanting to win a national championship as a team. I just wanted to do what I needed to do for the team.”

Frustration settled on top of the Tigers’ suffering due to the realization that their 197.5625 score would have been more than enough in Semifinal I to allow the team to advance to Saturday for a final chance at an NCAA title.

“Obviously, this stings,” said the sophomore All-American Johnson. “This isn’t how we wanted our season to end. We tried our best. We fought to the end. I’m just grateful we were able to get this far after having last year taken away.”

LSU gymnastics returned to the Pete Maravich Assembly Center on Friday night to host No. 22 …

Partly to mostly cloudy with widely scattered showers or thunderstorms possible later at night. Low near 70F. Winds ESE at 5 to 10 mph. Chance of rain 30%.