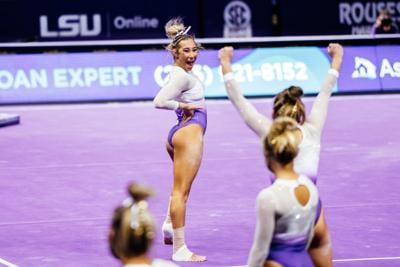 After a heart-wrenching loss at the SEC Championships in Huntsville, Alabama, LSU gymnastics showed no loss of confidence as they arrived in Salt Lake City for the first round of the NCAA competition. The Tigers finished Friday night with a score of 197.025, placing second by a narrow -.100 deficit. Kentucky came in first at 197.125 to capture the top spot in the Regionals Saturday.

Sophomore Kiya Johnson took home the all-around title with a whopping 39.7, scoring two 9.9s and two 9.5s. Freshman Haleigh Bryant came in last in the all-around at 38.45 after experiencing difficulty in the first two rotations on beam and floor.

"We really put ourselves into a hole today, but I am proud of the way they fought," Head Coach Jay Clark said. "The point is to survive and advance and that is what we did. There were some really big routines across the board tonight. We just need to refocus and get our rest before tomorrow night. I have full confidence in this team to reset and do what we need to do."

The team, unfortunately, started on beam, arguably a rough place to start a meet. The rotation began slow, with seniors Christina Desiderio and Sami Durante scoring 9.8 and 8.875 after Durante missed her connection in the middle of the routine. Bryant couldn’t seem to pick up the pace as she garnered a 9.225, her lowest score of the season. Due to Durante’s lower score, LSU was forced to count the score rather than drop it. Bridget Dean shook back with a 9.85 while Johnson followed at 9.9. Beam anchor Reagan Campbell made her huge comeback by finishing the rotation with a 9.925, her highest score since Georgia. She also took the beam title out of the four teams for the night.

The Tigers seemed to run into some more problems on the floor rotation as well. Desiderio and Alyona Schennikova kicked off floor with mediocre 9.875s, nonetheless, tying for the third-highest floor score for the Tigers tonight. Freshman Sierra Ballard followed with a great routine, but stepped out of bounds toward the end, resulting in a 9.75. Sarah Edwards heated the routine up with a 9.9, redeeming herself from the last meet. The SEC Freshman of the Year was unable to land her final pass, similar to her struggle in the home meet against Florida, and finished with a 9.375. Sophomore Johnson anchored the event with a 9.95, grabbing the floor title for the third straight meet in a row.

LSU kicked things up a notch in the third rotation at vault, scoring a 49.350 overall. Johnson and Bryant tied for the vault title with a 9.950 each. The freshman clearly shook back from her mishaps on the first two rotations. Chase Brock started vault with a new career-high at 9.900, widely beating her former score of 9.825. Sophomore Schennikova and SEC Vault Champion Elena Arenas performed below average, scoring below 9.9.

The strongest performance of the night came on the uneven bars with an overall 49.475. Bars anchor Durante tied with a Kentucky gymnast for the top spot on bars at 9.95. Freshman Brock couldn’t maintain a smooth bars routine and ended up with a 9.1. Johnson and Bryant gave the Tigers their second-highest bars scores of the night with 9.900s.

The Tigers will be put to the test in the Regional Final Saturday to see if they advance to Semifinals in Fort Worth on April 16th. Fans can find out on Saturday by tuning into ESPN2 at 8 p.m. CT.

Haleigh Bryant is in a class of her own. Her 2021 campaign has been remarkable, but that’s nothing new for her. A freshman from Cornelius, Nor…

Partly cloudy. A stray shower or thunderstorm is possible. Low 62F. Winds ESE at 5 to 10 mph.

Mostly cloudy in the evening then periods of showers after midnight. Low 56F. Winds NNE at 5 to 10 mph. Chance of rain 40%.