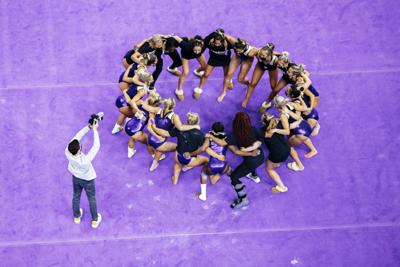 LSU Gymnastics Head Coach Jay Clark sat down for his post-meet interview after his team suffered a heartbreaking loss at home to the Florida Gators.

“It’s a shame anybody had to lose that one,” he said.

The showdown between No. 1 and No. 2 ended in heartbreak for Tiger fans inside the PMAC on Friday night. LSU fell in a tight race against Florida with a final score of 198.150-198.050. The meet marked the top-two highest scores in the nation this season. It also marked the 14th time that LSU gymnastics has scored above 198 in school history.

"I'm so proud of our kids. They fought toe to toe with probably one of the best Florida teams I've seen in a long time," Clark said. "I have nothing but positive things to say about the way they fought and left it all out there tonight."

Despite the loss, the Tigers proved that teamwork and dedication can rival those with a large array of raw talent any day. The Gators’ top contenders swiped all four titles of the night, but only managed to defeat LSU by a .100 lead. Top performances by nearly all the purple and gold gymnasts is what kept them in competition with Florida that night.

“There’s not a thing about this that’s a failure,” Clark chuckled. “It’s certainly not the end of anything. We know we’re gonna see that team again down the line. No matter what, this meet will not be our final destination. We’ve got a lot more growth that we can give.”

The team opened the meet strong with the highest vault score in the nation this year at 49.600. Chase Brock led the first run and Alyona Shchennikova followed with a huge launch. Brock matched her career-high of 8.25 while Shchennikova claimed a new career record at 9.25.

After missing out on the meet in Auburn due to COVID-19 protocols, Sarah Edwards returned with a 9.25, her highest vault score this season. Kiya Johnson and Haleigh Bryant wrapped up the rotation with 9.50s. Johnson successfully landed her first double full this year, granting her a much higher score for this season. Bryant nailed a new career-high on vault as well.

LSU headed into the second rotation with a 9.925 season-high by Johnson. Brock and Olivia Dunne followed with weaker than average scores for the two. Shchennikova and bars anchor Sami Durante picked up the pace with explosive 9.950s, matching their career-highs. The team’s overall score in uneven bars was a season-high and the second-highest score in the nation.

A look back at the half showed LSU with a .200 lead against Florida. Florida ended their first two rotations with a 49.400 on bars and 49.550 on vault. LSU, ranked seventh on vault, scored above the Gators who are No. 1 on vault. The Tigers also beat expectations when surpassing Florida on bars as well.

The finale of the meet would come down to the performances on beam and floor. The Gators sat at No.1 on beam while LSU has dominated the nation at No. 1 on floor.

Florida flipped a switch in the third rotation of the night. They pulled off their highest floor routine score of the season thanks to powerhouse Trinity Thomas, who earned her second 10 on floor this year. The next highest scores on floor came from gymnasts Nya Reed and Alyssa Baumann at 9.925 and 9.90.

"We came in knowing that those quarter of a tenths were going to be the difference,” said Florida Head Coach Jenny Rowland. “We've been working so hard in the gym for those little details – fighting for landings, fighting for handstands, and fighting to stay present. Tonight there was so much fight all the way through to the very last dismount.”

The Gators’ success on floor did not shake the Tigers though, as they accomplished their highest beam score of the season at 49.550. Christina Desiderio matched her season-high 9.90 while Durante, Bridget Dean, and Johnson all brought home 9.925s. Anchor Reagan Campbell struggled a bit this meet, putting up her lowest score of the season.

After the performance, Campbell realized her hip flexor injury would keep her from performing first on floor that night. Without any hesitation, Clark put Dean in her leading position. Sophomore Johnson ended the night on beam and did not appear for the floor round. Despite not performing on her biggest strength which is floor, her season highs on the remaining three rotations prove she may be ready for an all-around return soon.

Dean started the final rotation of the night with a 9.875 followed by a weaker score of 9.750 by Desiderio. Shchennikova and freshman Sierra Ballard swept the highest scores on floor for LSU at 9.925s. Louisiana’s own Ballard, after only performing once this season and scoring a mediocre 9.825 on floor, shocked viewers with her new career-high. Edwards followed with a score high enough to sustain the race with the Gators, who somehow managed to surpass themselves on beam and rake in a whopping 49.650.

The answer to tonight’s match all came down to LSU’s leading freshman: Haleigh Bryant. The gymnast went flawlessly into her first two runs of her routine until a stumble into her third pass caused her to fall out of her front double full. The Tigers’ hope for a 9.875 to win the meet seemed to vanish in that moment. This would mark Bryant’s first loss in the all-around.

“That kid is an incredible freshman,” Clark said. “She’s carried us a good portion of this season so far and there’s no way she should feel any kind of disappointment. We win as a team, and we lose as a team.”

“You can’t rely on one person every single time to get the score that you need,” Durante said. “It’s important for us to keep pushing even when that happens. That’s good for [Haleigh] to learn too. We don’t have to rely on her every meet, and it’s okay for her to make mistakes too.”

Florida did not underestimate LSU and packed a punch the whole way through. The team broke their own season high on beam and obtained the highest score on the floor this season at 49.550. Thomas took away every single title of the night and tied with Ellie Lazzari for the beam crown. Megan Skaggs was less than her usual consistent self, falling off balance beam and coming in last on the all-around. Thomas topped the all-around with an insane 39.900, tying her with four others for the fifth-highest score in NCAA all-around history.

“You score like that at a national championship….you’re gonna win in most cases,” spoke coach Clark. “They should be proud. We gotta go back to the gym and find those one percents that we can improve on, then get ready to go to Tuscaloosa.”

The Tigers will return to action to face Alabama at 7:30 p.m. CT Friday in Tuscaloosa, Ala. The meet will be streamed live on SEC Network+ for fans at home. With the second-highest score in the country, LSU gymnastics is excited to see how the remainder of the 2021 season will unfold.

“We still have the SEC championship. We have another chance, and we’re gonna use that to our advantage,” Durante said.

Although the LSU gymnasts are disappointed in the night’s loss, most of them are proud of the career-breaking success they found in their individual scores. If they have learned anything from Friday’s meet, it’s that they have enough potential and ambition to triumph over Florida and every other team in the nation to finally win LSU’s first NCAA Gymnastics Championship.

“We’re every bit as confident as we were coming in," Clark said. "We’re hurting a little bit, we’re disappointed. But we can look at it and the logic says this: we can beat that team. And we will.”

Coming off its first loss of the season, LSU gymnastics enters a crucial stretch of the season in which staying focused and positive is more i…

48°
Showers in the Vicinity

Cloudy skies early, then partly cloudy after midnight. Low around 40F. Winds N at 5 to 10 mph.

Cloudy skies early, then partly cloudy after midnight. Low around 40F. Winds N at 5 to 10 mph.