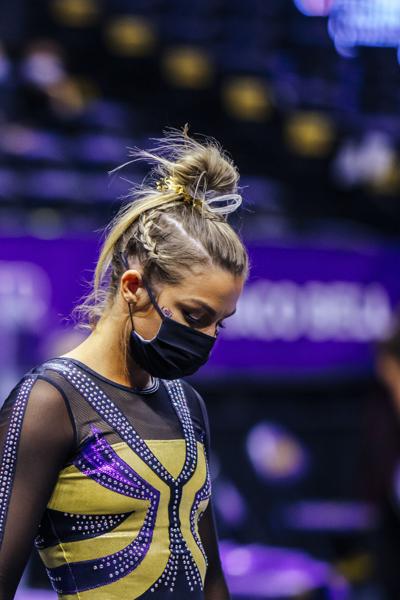 Kiya Johnson scored 9.875 on bars, and Bridget Dean placed second with a 9.80. All-around Haleigh Bryant came in with a 9.875. Schennikova picked up the pace with a 9.90 while Sami Durante capped the rotation with a 9.875. Alabama took away the bars title but a majority of the LSU gymnasts were at the top of the scores on bars.

The Tigers hit vault next with the highest scores coming from senior Sarah Edwards and freshman Bryant at 9.90. Shchennikova had a weak score of 9.775, unlike her scores from the last two meets exceeding 9.90. Ranked tenth in vault, Alabama came out on top of the Tigers again who are ranked fourth in this rotation.

LSU raked their lowest floor score of the season tonight at 49.250. Schennikova came in at 9.750 while freshman Sierra Ballard scored a mediocre 9.725, putting the Tigers down from their usual 49.350. On the bright side, floor anchor Bryant bounced back from her performance last week against Florida and scored a 9.950 while Edwards garnered one of her highest scores this season at 9.90.

The team finished the night on beam without senior Reagan Campbell. The beam anchor presumably is still out due to her hip flexor injury. Instead, Shchennikova anchored the event with a 9.875. Usual powerhouse Durante had a rocky landing off beam and was given a 9.625. The other four LSU gymnasts in the lineup all finished with 9.875s.

Alabama gymnastics seemed to have a better night overall. The Crimson Tide swept every title of the night, including the all-around. Gymnasts Lexi Graber and Luisa Blanco both scored 9.975s on floor, topping their former career bests of 9.950 and 9.850.

LSU gymnastics will be on the road again next weekend in Lexington, Ky., on Friday, Feb. 26 at 7:15 p.m. CT. The meet will be filmed on SECNetwork+ through the ESPN app or website.

Coming off its first loss of the season, LSU gymnastics enters a crucial stretch of the seas…

LSU gymnastics drops emotional meet to Florida: 'This is not failure'

Thunderstorms likely. Rainfall will be locally heavy at times. High 74F. Winds SE at 5 to 10 mph. Chance of rain 90%. 1 to 2 inches of rain expected. Localized flooding is possible.

Scattered thunderstorms in the evening, then mainly cloudy overnight with thunderstorms likely. Gusty winds and small hail are possible. Low 63F. Winds ENE at 5 to 10 mph. Chance of rain 90%.

Thunderstorms in the morning will give way to cloudy skies late. High 73F. Winds NNE at 5 to 10 mph. Chance of rain 90%.

Some clouds. Low around 60F. Winds light and variable.

Scattered thunderstorms in the evening, then mainly cloudy overnight with thunderstorms likely. Gusty winds and small hail are possible. Low 63F. Winds ENE at 5 to 10 mph. Chance of rain 90%.

Variable clouds with scattered thunderstorms. Low around 60F. Winds ENE at 5 to 10 mph. Chance of rain 50%.

A shower or two around the area in the evening, then partly cloudy overnight. Low 52F. Winds N at 5 to 10 mph. Chance of rain 40%.