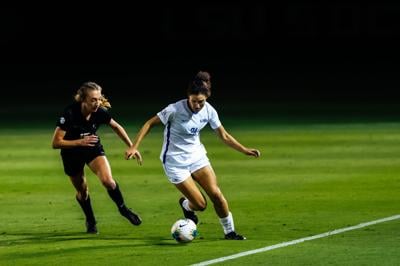 LSU soccer returned with the same energy from the last round to defeat Ole Miss 2-1 in overtime on Sunday afternoon. This marks the team’s second win of the season. The Tigers now advance to the quarterfinals of the SEC tournament to take on No. 3 seed Texas A&M. They had previously lost to Ole Miss in the same fashion earlier this season.

“There’s a ton of belief. I think Friday night’s win has lifted them,” coach Sian Hudson commented on the broadcast, "We played through our lines really well and possessed the ball well, as well as having outshot the opponent today. The team’s confidence is building.”

LSU’s first goal was scored in the 32nd minute by Tinaya Alexander from twelve yards out. Ole Miss grabbed an equalizer after Madisyn Pezzino sent one soaring into the net in the final minute before half. Both teams endured a scoreless second half despite getting off twelve shot attempts. The game-winning goal arrived in the 99th minute after junior Meghan Johnson crossed to Alexander to send in her second goal of the match.

The Tigers outshot the Rebels 14-13, seven of those shots being on goal. Mollee Swift impressively made a total of eight saves during the match.

The Tigers will play against Texas A&M at 3:30 p.m. CT on Tuesday, Nov. 17 to decide who advances to the semifinals.