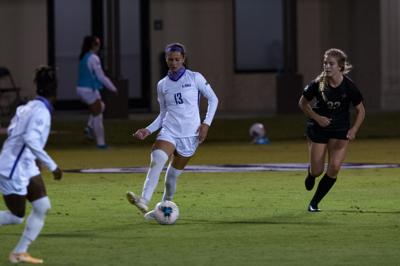 LSU soccer won its first match of the season on Friday night. They beat Alabama 2-0 in the first round of the SEC tournament at Orange Beach, Alabama.

Thanks to Taylor Dobles, the Tigers scored a goal in each half. She scored her first goal in the 13th minute after an assist was made by Tinaya Alexander.

The second score came in the 88th minute after Courtney Henderson assisted Dobles in another goal.

After a winless season, LSU came out flying in the first round of the SEC tournament. LSU recently improved its positioning on the field since the season concluded. The Tigers made 16 shots in total, seven of those being on target. Shannon Cooke nearly made a goal in the first half but shot too far left. Another close chance came in the 49th minute by Megan Johnson when she shot too wide out.

Alabama showed great effort in the end of the second half but failed against LSU’s defense. Wasila Diwura-Soale did a great job of orchestrating the midfield tonight. Swift made crucial saves in the 20th and 63rd minutes.

LSU has returned as a completely new team for the SEC tournament as they head to the second round to face Ole Miss on Sunday at 3:30 p.m.

In December 2019, LSU hired Sian Hudson to begin the task of elevating its soccer team to the next level. Hudson left her job as the head coac…