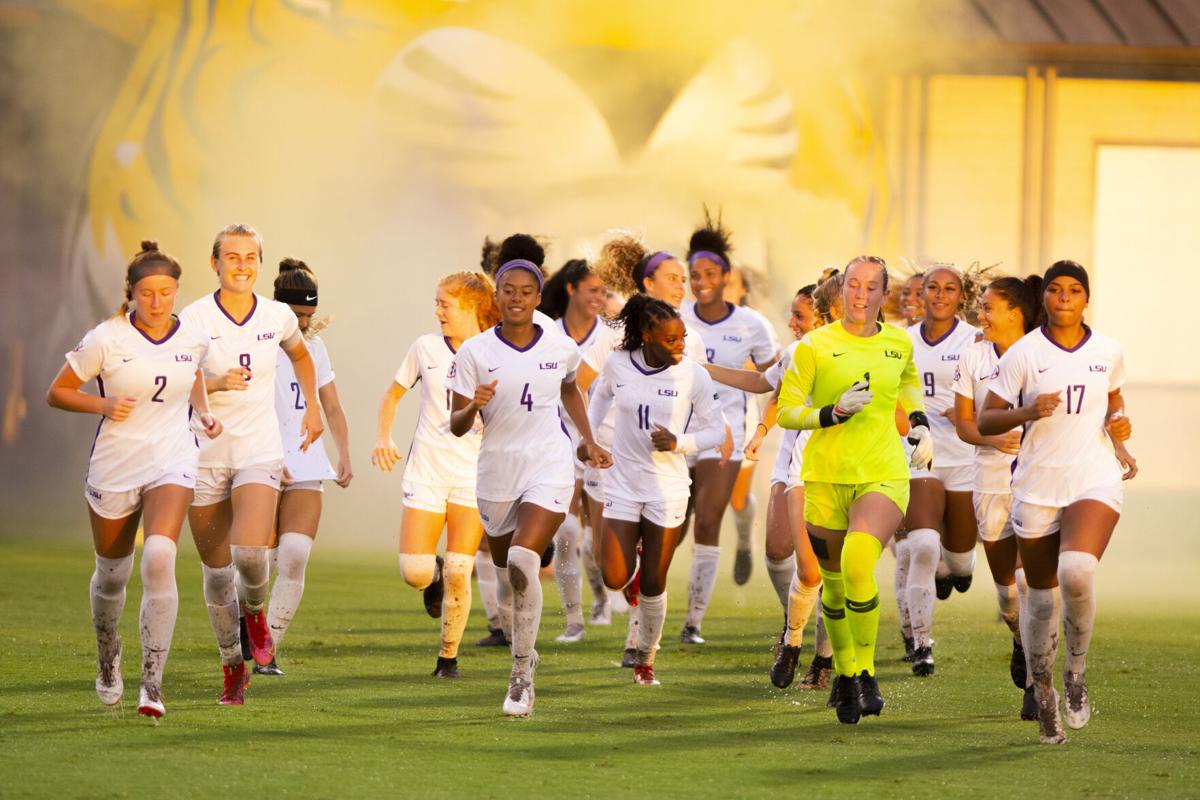 The LSU soccer team runs onto the field Friday, Sept. 17, 2021, before their 2-0 win against Mississippi State at the LSU Soccer Stadium in Baton Rouge, La. 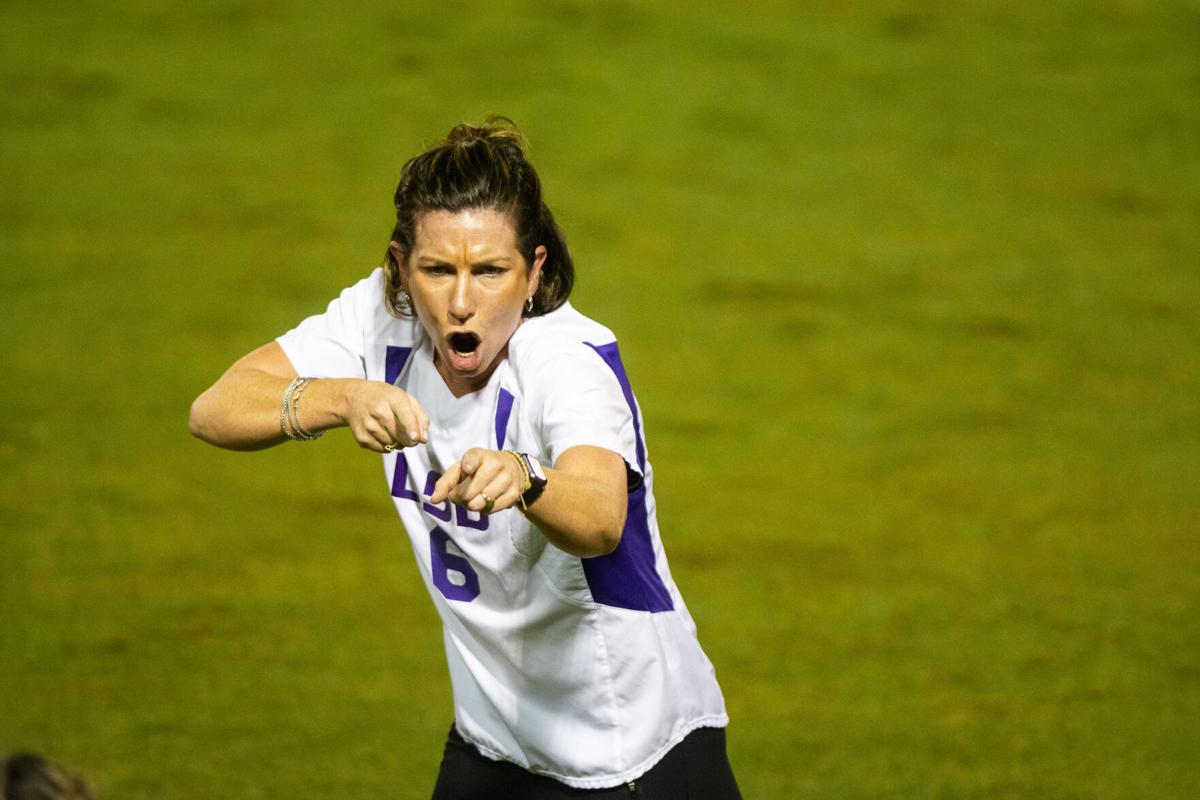 LSU soccer alumna Sara Pollock pumps up the fans during halftime Friday, Sept. 17, 2021, during their 2-0 win against Mississippi State at the LSU Soccer Stadium in Baton Rouge, La. 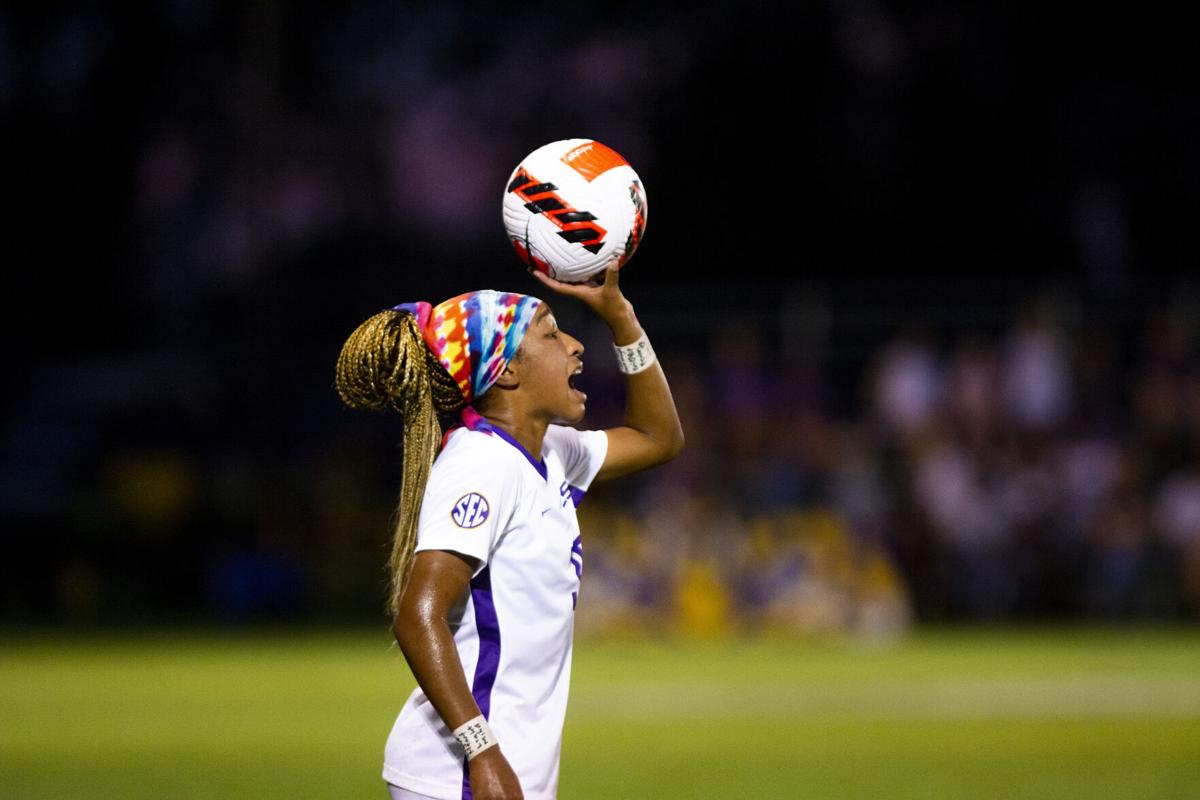 LSU soccer junior forward Rammie Noel (38) yells at her teammates to get open Friday, Sept. 17, 2021, during their 2-0 win against Mississippi State at the LSU Soccer Stadium in Baton Rouge, La. 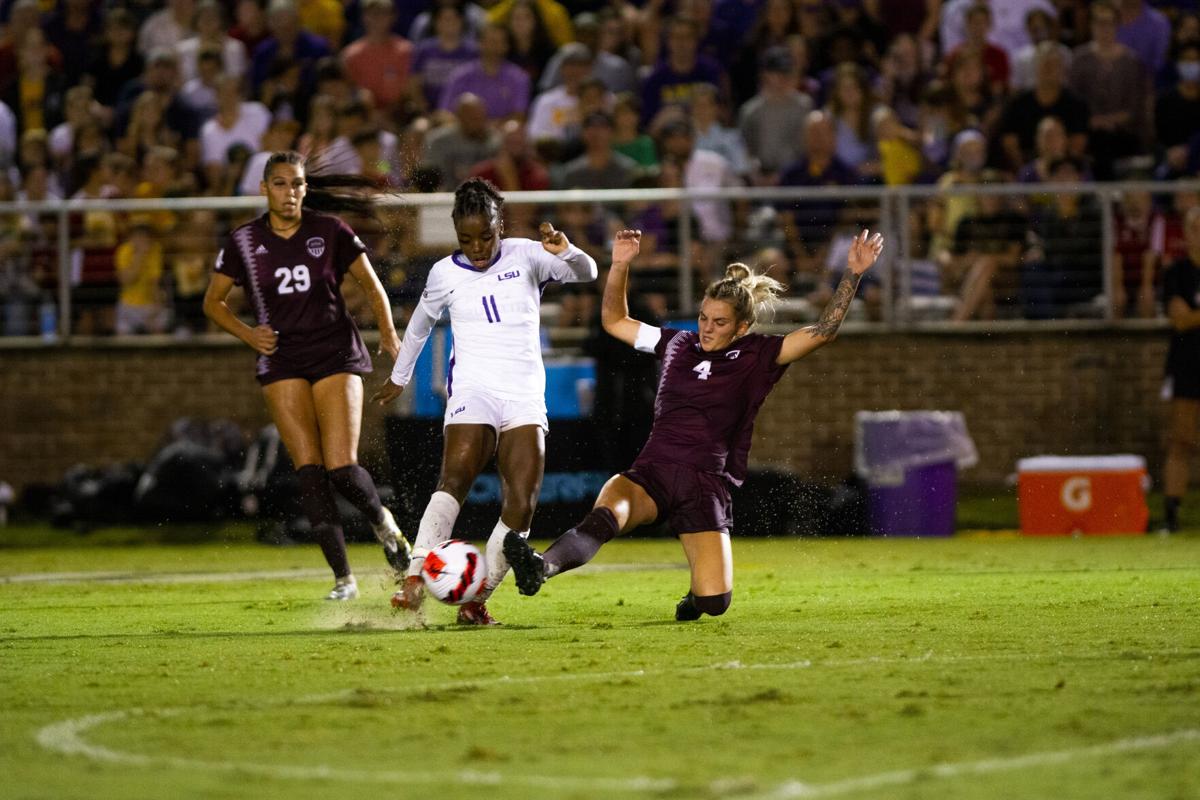 It was muddy. It was loud. It was packed. It was an SEC match-up.

After winning only two matches last fall, the LSU soccer team has a legitimate shot at being named this year’s SEC champions. On Friday night, in front of an SEC record-breaking crowd of 3,021 people in the stands at the LSU Soccer Stadium, the Tigers defeated Mississippi State 2-0.

The No. 6 LSU squad extended their winning streak to 11, remaining undefeated (8-0) this season, while the Bulldogs now stand 2-3-3 on the season; their previous two games slated against Southern Mississippi and Belmont had been postponed following a COVID-19 outbreak on the team. Consequently, the Bulldogs were missing 10 players from Friday’s match. The Tigers scored two quick goals, and by the end of the match, they had outshot State 19-7, in their fifth shutout of the season.

“We saw 3,000 fans cheering their hearts out for the Tigers, and that was just an electric atmosphere to play in,” Head Coach Sian Hudson said. “It was great to open SEC play in front of that crowd.”

The skies cleared in Baton Rouge just in time for play to officially go underway around 7:05 p.m. The Tigers made striking efforts immediately on the pitch after kickoff. Midfielder Athena Kuehn made an on-goal shot which was blocked by Mississippi’s goalie, Maddy Anderson. LSU made a few more attempts that went off-target to keep the pressure consistent, as well as strategically making substitution changes before a chance came at the 28th minute.

Senior defender Grace Haggerty took the corner kick, and both teams scrambled to gain possession. While dueling in the box, which was turned into practically a mud-pit, LSU forced State to make an error and score an own goal to put the Tigers in the lead one to nil.

“The surface we played on tonight provided some challenges, but I thought the players dealt with it really well and put the ball in the box,” Hudson said after the match. “[We] created some really difficult moments for Mississippi State in the first half and got the first goal from it.”

Shortly after, LSU assured their fans that victory wouldn’t come from chances alone, but also from skill. In the 34th minute, senior Lindsi Jennings made a quick pass to forward Tinaya Alexander who sent the ball soaring into the top-left corner of the net, from outside the box to put the Tigers up two scores. This goal marked Alexander’s seventh goal of the season, which almost averages a goal per game.

The rest of the match was about defense for LSU. Goalkeeper Mollee Swift and the Bulldogs’ Maddy Anderson kept the net for the entire duration of the match. Swift finished with two saves and Anderson, three. The Tigers gave the Bulldogs a few close calls before a quiet 15 minutes concluded the match.

LSU will commute to Oxford, Mississippi, for their next SEC matchup on Sept 23 at 6:00 p.m. CT. Tiger fans can catch the match against Ole Miss on SECNetwork+.