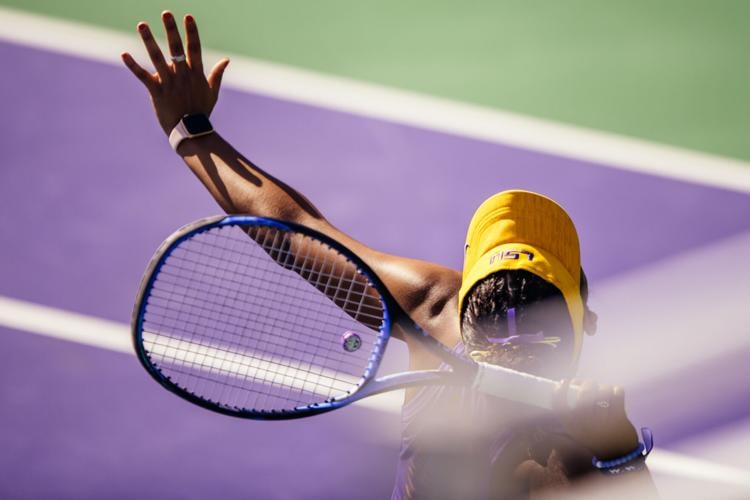 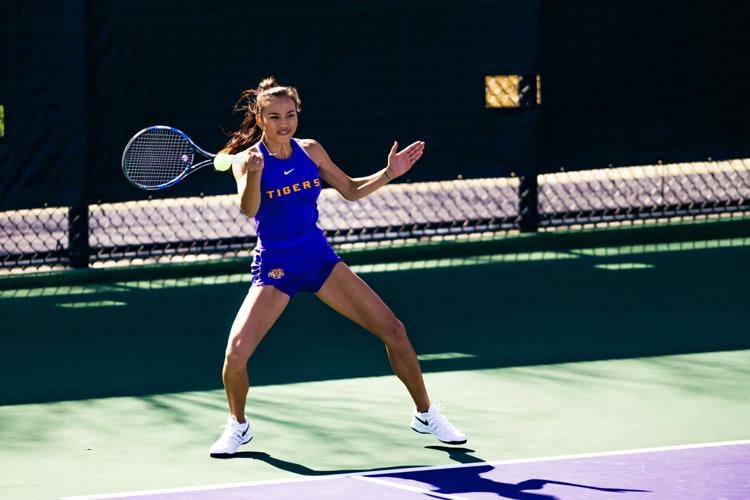 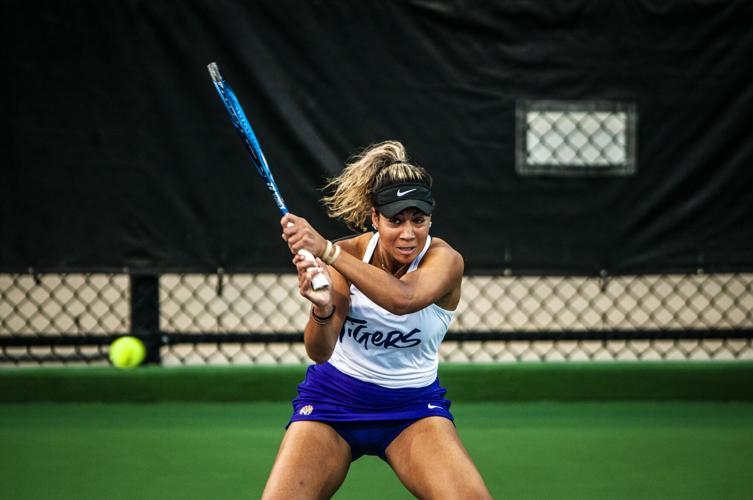 Though it isn’t difficult to predict the floor for this LSU women's tennis squad, with its developing core remaining mostly intact (except for the losses of Paris Corley and Eden Richardson), there are questions pertaining to the team’s ceiling.

How far can this team climb this season, and will their off-season additions be enough to push them to new heights?

Off-season Additions and their impacts

To briefly recap, the team acquired Big 10 graduate students in Illinois’s Mia Rabinowitz and Purdue’s Ena Babic over the previous off-season. They also signed a three-star recruit in Shaye Longwell.

Each graduate student made strong impacts on their previous teams, with Babic serving as the Boilermakers’ first court player in singles and Rabinowitz winning multiple Big Ten Tennis Athlete of the Week awards and posting a record above .600 in both singles and doubles with the Fighting Illini. With that being said, they are expected to make a huge impact on the team, providing the Tigers with a great addition in terms of experience and skill.

Obviously, it is still too early to tell, but since the fall season has concluded, we now have a better idea of how impactful these new additions could be. Babic and Rabinowitz were featured heavily in LSU’s lineups in the fall, with Longwell’s appearances being limited due to her lack of experience at the college level.

On the singles side, she finished 7-3, winning against multiple ranked opponents in the team’s first invitational of the season. Her only three losses came against ranked opponents, including an impressive loss to No. 22 Emmanouela Antonaki that went to three sets.

In doubles, she was partnered with three different players in Taylor Bridges, Nina Geissler and Maggie Cubbitt, ultimately finishing with a combined doubles record of 7-5. Her most impressive pairing by far was with fellow graduate student, Bridges.

The pair was ranked No. 51 in the preseason and proved themselves worthy of that ranking early, winning their first of four battles against ranked duos in their very first match as a duo. Their other three ranked wins occurred on the big stage at the ITA All-American Championships.

After losing their first match of the tournament to get knocked down into the consolation bracket, they would complete an incredible run to claim the consolation title, defeating three top-30 duos (No. 29, No. 7 and No. 19 respectively) along the way.

With her experience at Court One for Purdue and ability to perform well against ranked opponents, it’s very likely that Babic will man one of the top courts for the Tigers. And her chemistry with Bridges hints at her making a similar impact in doubles.

Rabinowitz got off to a slower start, but that could be a result of sitting out her senior year to redshirt and dealing with COVID right before the fall season began. Proof of that can be seen in her progression during the fall, as after starting 0-3, she won three of her last five matches to finish the fall with a 3-5 record.

In doubles, she was paired with Nina Geissler and Bridges throughout the season, finishing with a combined record of 5-5. She played the third most doubles matches on the team behind Bridges and Babic, and that’s due in part to the fact that Bridges and Babic played at an event she wasn’t featured in.

Just like Babic, Rabinowitz gives the Tigers an advantage in the experience department and should be featured heavily within their lineup. The only question is which courts will she end up occupying.

That all depends on the development of LSU’s returning players and in particular, their juniors. Safiya Carrington, Maggie Cubitt and Nina Geissler have all played extensive amounts of time for the Tigers, with Carrington garnering the most experience of the three.

Carrington has manned Court Two for the Tigers for most of her career, which is an incredibly difficult court to start your college career at. So, it’s somewhat puzzling that the start of her LSU career was stellar while her previous was much more inconsistent.

She had an incredible fall season as a freshman that saw her go 10-3 and defeat a top-25 player in Princeton’s Brianna Shvets, but some of her inconsistency started to show when she finished that spring on a three-match skid in which she didn’t win a single set. She would follow up an impressive 16-7 debut with an up-and-down 10-11 second year that included multiple ranked wins and losing streaks.

It’s difficult to predict how she will do this season but so far, but she appears to be moving back in the right direction. She concluded the fall season with the best singles record on the team, winning seven of her nine matches and claiming runner-up at the ITA Southern Regional.

Just like Babic, her only two losses came against ranked opponents, but she did have fewer ranked wins with just one. Still, it’s a huge improvement from her previous season and a great sign for the program.

Cubitt has shown a lot of promise over the past two years and could see herself in a bigger role come spring. She was most prominently featured at Court Four in her previous season, finishing with an 8-4 record and zero ranked wins.

She would pick up her first ranked win this fall, arguably the most impressive win by any Tiger so far. The junior dominated No. 26 Indianna Spink by a score of 6-4, 6-0 in her last competitive match until spring, ending the fall season with a 4-3 record in singles.

Similar to Cubitt, Geissler has been consistent over her years as a Tiger, mainly occupying Court Six. She started her previous spring season on a six-match win streak and sat at a spring record of 10-2 in April before losing her last two matches.

She has had a rough fall season with its fair share of bright spots. She started off okay, going 2-2 in her first four matches, but she would have a brief skid after that, losing her next three matches.

However, one of those losses was a strong one, with Geissler forcing No. 22 Emmanouela Antonaki to a third set that she would eventually lose 3-6. She would also conclude her fall action with a win, finishing with a singles record of 3-5.

Even with Nina Geissler struggling so far, LSU’s depth has shown signs of improvement and has had many bright spots pop up over the past few months. Fall competition tends to be a mixed bag, as it mostly consists of turnovers and therefore features more losses.

There has been one concerning trend that’s worth keeping an eye on though.

After beginning the season with a strong two-set victory, Taylor Bridges won just one of her last six matches to conclude the fall. She has played at Court One for LSU over the past two seasons and typically hovers between No. 30 and No. 50 in the national rankings, but it’s hard to imagine her maintaining either of those if she can’t turn it around.

The struggles began last season around March, as conference play was heating up. After starting 10-3, she went 4-9 in her last thirteen matches to finish off the 2020-21 season. She would face 11 ranked opponents in that span, defeating just two of them.

Obviously, Court One is an incredibly tough court to man and skids are bound to happen, especially in a conference that features vast amounts of talent, but it has become too long of a skid to continue to be ignored.

She does have the capability to win at Court One, proving it during the 2019-20 season, where she went 7-5 against ranked opponents, and the beginning of her previous one, where she won four of her first nine ranked matches. At her best, she has made great players look mediocre and produced multiple near-sweeps of ranked opponents.

She just isn’t at the level she once was. She could still rebound in the spring, but we’ll have to wait and see.

Last season established a precedent that will likely be difficult to surpass. They peaked at No. 9 in the national ITA rankings, had the most conference wins in program history with nine and had ten wins against teams ranked in the top-50 according to r2sports.com.

However, this current team and potentially the next few teams could have the talent to get it done. The players that will control the six singles courts will have between two and four years of college tennis experience and every duo that played during the fall season had a doubles record that was .500 or above.

With three players graduating after this season, this may be their best chance for a run to the title in the next couple of years, but the Tigers do have some new recruits in blue-chip Nikita Vishwase and five-star Noor Carrington (yes, sister to Safiya) who will join the team next season that could help continue LSU’s success.

But for now, let’s see what this team can accomplish this season.

Before playing a single college match together, the fifth-year senior duo Taylor Bridges and…

After finishing last season 12-14 and making the NCAA tournament, the Tigers are looking to build on a season filled with ups and downs. They …

Widely scattered showers or a thunderstorm early. Then partly cloudy. Low near 75F. Winds light and variable. Chance of rain 30%.