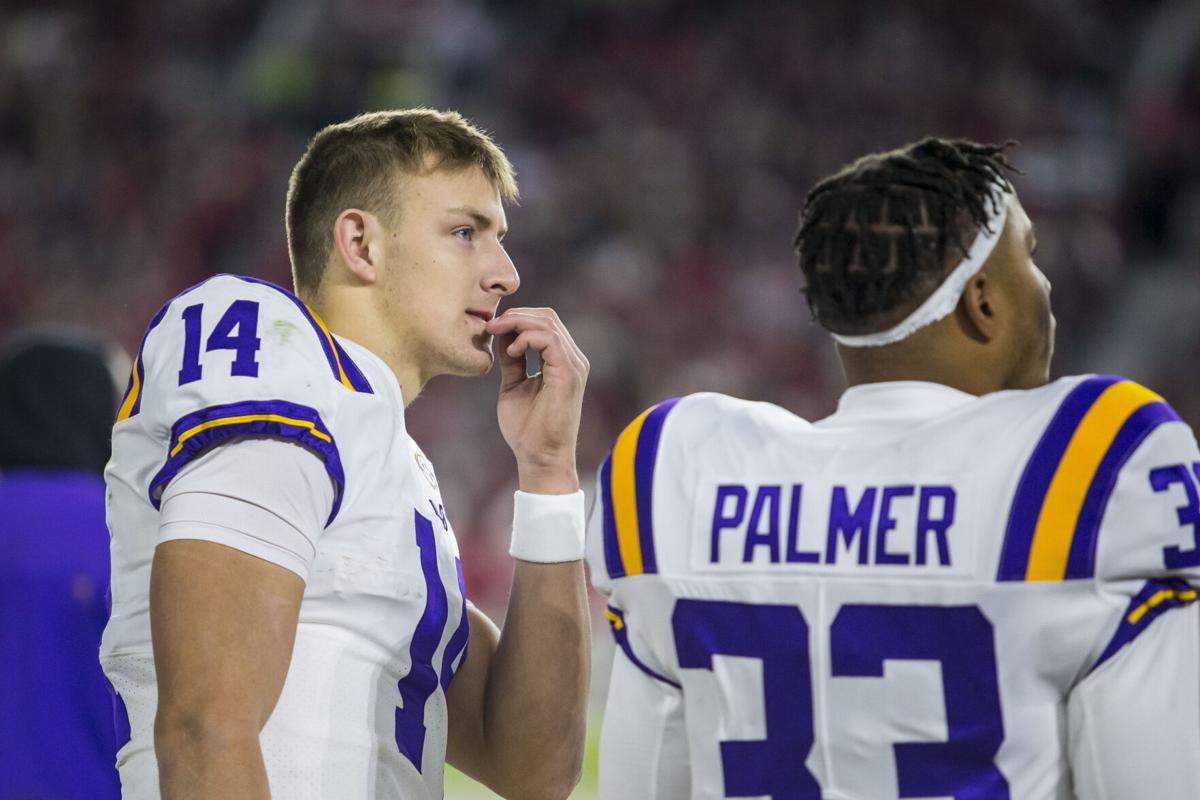 LSU quarterback Max Johnson (14) looks on as Alabama drives the ball into the red zone during the first half of an NCAA college football game, Saturday, Nov. 6, 2021, in Tuscaloosa, Ala. (AP Photo/Vasha Hunt) 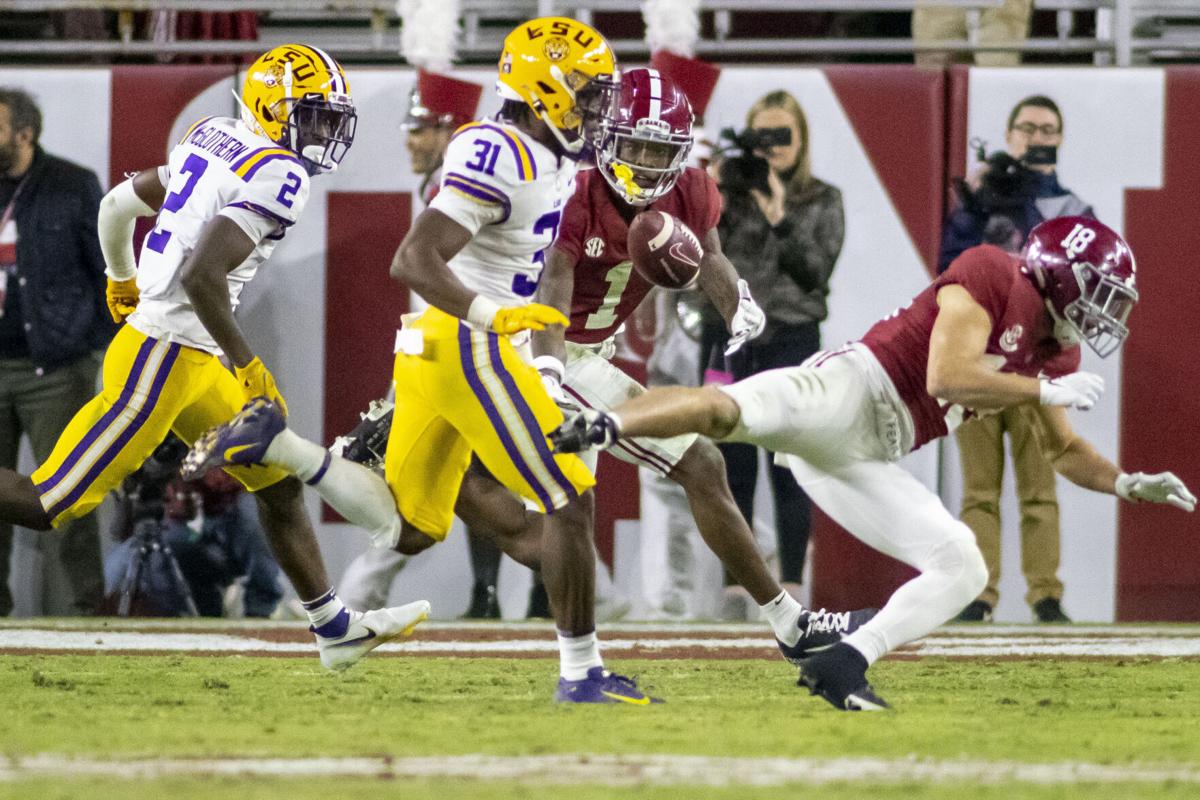 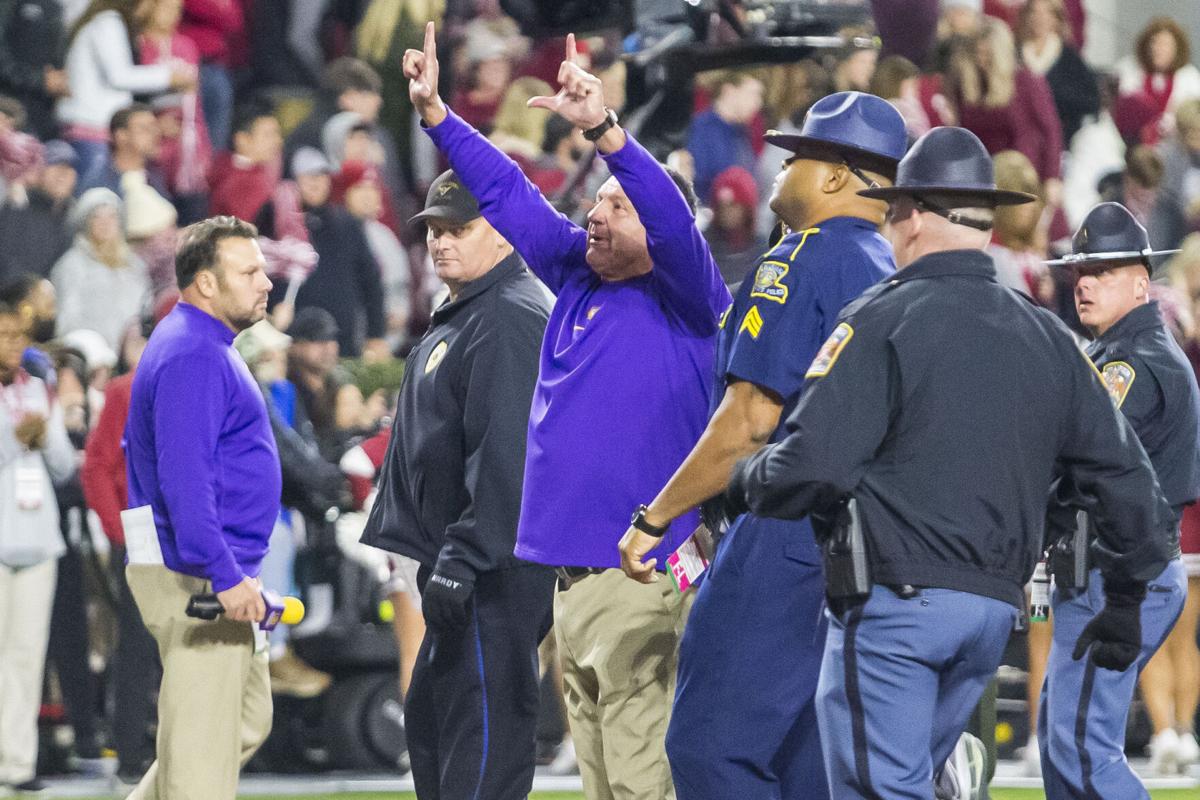 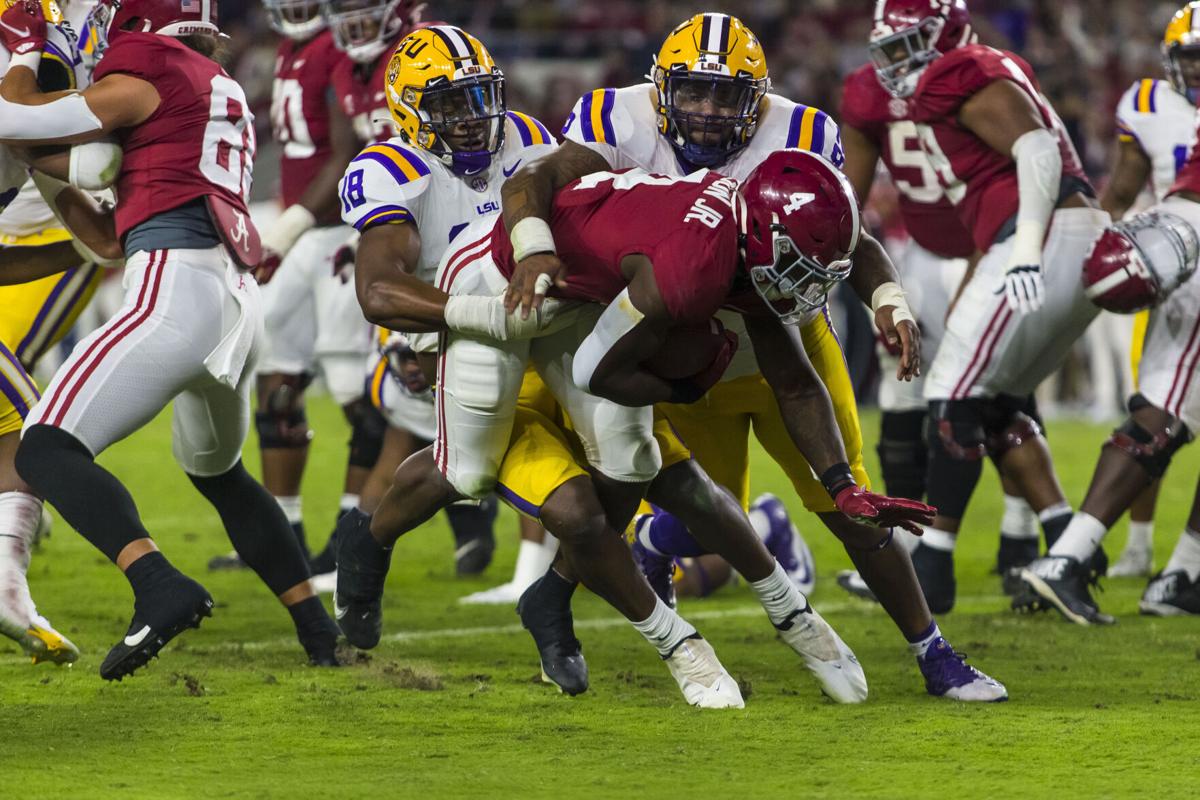 Despite missing eight starters, LSU’s defense frustrated Nick Saban Saturday night in Tuscaloosa, Alabama, and nearly scored the Tigers a monumental upset. But LSU’s offense could muster only three solid drives, and in the end, their 14 points were not enough. In an unexpectedly close game, Alabama won 20-14. Here are three key moments that explain how LSU nearly did the impossible.

Alabama quarterback Bryce Young, sat under center as his team up six with under four minutes to play, staring down a third and five on the LSU 46. Seven Tigers lined up shoulder-to-shoulder on the line of scrimmage, showing a zero blitz package.

LSU and its defensive coordinator Daronte Jones wouldn’t send the house in this situation, should they have? LSU’s secondary was depleted, without its top four corners and one of its safeties. Leaving them on islands would be a mistake, especially against Alabama’s stellar receivers and more so because Jones has not called a zero blitz all season, according to Ed Orgeron.

Indeed, a zero blitz was the call. LSU had shown disguised fronts all game, but not this time. Young wasn’t ready for the pressure.

Sixth-year senior safety Cam Lewis sprinted off the edge, around the right tackle, and knocked the ball out of Young’s grip. LSU recovered and took over on the Alabama 41 with a chance to take the lead.

In the week leading up to the game, Orgeron stressed that his defense was too simple, too predictable, “too vanilla.” He said he wanted Jones' unit to show more diverse looks and try to puzzle the offense. He meant it.

LSU recorded five sacks on Young, none more important than Lewis’ attack off the edge. In a way, the forced turnover and the Tigers’ ensuing drive represented the game in a nutshell: The defense delivered, but the LSU offense just couldn’t capitalize.

On first down, Ty Davis-Price ran for no gain. Then a pass from Johnson was batted down. Then, Orgeron tried to call a timeout but was too late: Johnson was hit down low and lofted a duck that fell incomplete. On fourth down and the rivalry on the line, Alabama blitzed the house and forced Johnson to throw off his back foot. The ball sailed over Jack Bech's head, and the game was over.

On LSU’s first drive of the game, Orgeron burned a timeout as his team lined up for a punt close to the 50-yard line. At first glance, it seemed like another puzzling clock management mistake, like the ones that lost LSU the Auburn game. But Orgeron had a trick up his sleeve.

Punter Avery Atkins caught the snap and ran forward to the line of scrimmage. Alabama’s linebackers converged, and tight end Jack Mashburn slipped past the defenders. Like a point guard driving the paint, Atkins shot a floater off one leg to Mashburn, who ran for 26 yards and a first down.

Orgeron took his headset off and threw down three victorious, fist pumps.

The offense scored a touchdown later on the drive, when two Alabama defenders miscommunicated, leaving freshman wideout Brian Thomas open in the flat for a walk-in score. LSU was up 7-0, the home crowd was shocked, and Orgeron was confident.

Later, Orgeron’s offense faced a fourth down on the Alabama eight-yard line. A chip-shot field goal would bring the Tigers within three, but a touchdown would give LSU the lead. Orgeron went for the touchdown, and it didn’t work, but it was part of the game plan that nearly gave him an upset.

Like the fake punt showed, Orgeron wasn’t afraid to take risks, as he only has three more games at the helm of the Tigers.

Clark is a star, and his defense was great. But he could only do so much.

Before Alabama faced a 3rd and 2 on their first drive of the second quarter, Damone Clark knew what the Tide would run.

The play was a run-pass-option. If the Alabama quarterback decided to fake the handoff, the running back would block any extra blitzers. Not Clark.

The senior linebacker, LSU’s best player of the night and most improved from a season ago, squirted through a gap in the offensive line, plowed through the back’s attempted block and brought the quarterback down for no gain. He single-handedly forced Alabama to punt.

At that point, Saban’s squad had four drives. They scored zero points and averaged only 3.8 yards per play. Clark’s defense was the story, and his fellow linebackers were the main characters. Their disguised blitzes were crucial to slowing down the Alabama attack.

Young’s offense was most successful when it neutralized the linebackers and the pass rush coverage.

On his second scoring drive late in the second quarter, Young faked a handoff, watched the LSU linebackers bite on the fake and hit a receiver behind them for a large gain. On the touchdown play Young took the snap and ran backward, buying himself enough time to loft a pass to a receiver running a deep drag across the field into the end zone.

That score put Alabama up 14-7 at half. Alabama’s offense was able to capitalize off of a Johnson interception. Had LSU taken care of the ball on the offensive side, the score would have been tied and the Tigers would have had a chance to take the lead on the first possession of the second half.

Instead, by halftime LSU had managed only 80 yards of offense, and their punter had more passing yards (26) than their quarterback (22).

In the second half, the defense gave its offense four chances to take the lead. The results of those drives: a punt, two turnovers on downs and a failed hail mary to end the game.

They could only do so much.

“We were in a position to win the football game,” Orgeron said, “but we stalled.”

LSU shows fight in close, heartbreaking loss to Alabama: 'We were going for the win'

TUSCALOOSA, Ala. — In a game that will be remembered for years to come, LSU fell just short …

On Saturday night in Bryant Denny Stadium the LSU Tigers put up a fight against the Crimson Tide of Alabama, but the final score that was disp…

A few showers in the morning with scattered thunderstorms arriving in the afternoon. High 78F. Winds S at 10 to 15 mph. Chance of rain 40%.

Scattered thunderstorms during the evening, then cloudy skies overnight. Low 69F. Winds SSW at 5 to 10 mph. Chance of rain 40%.