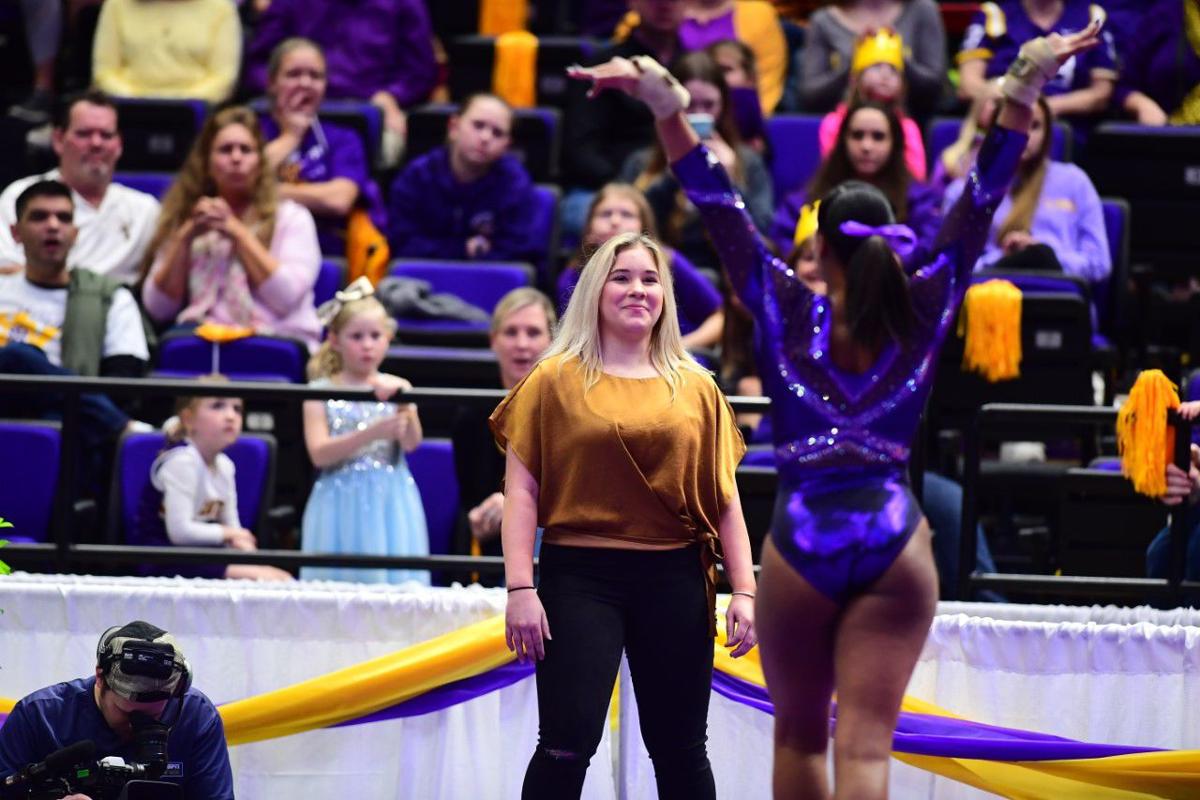 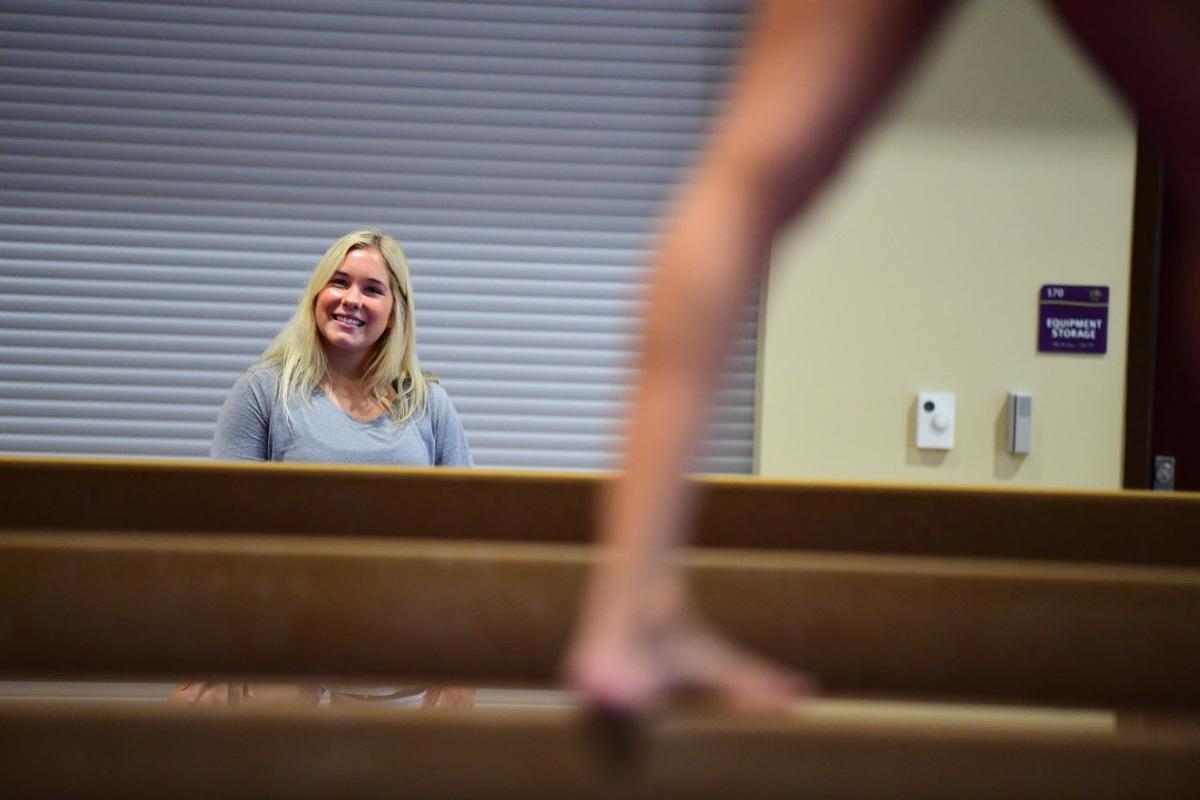 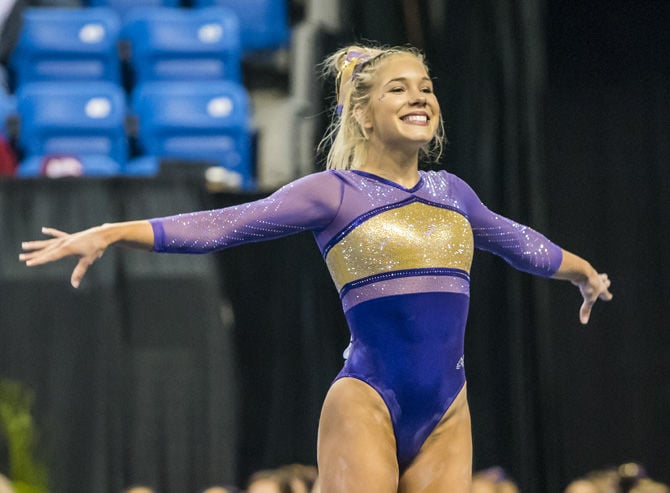 LSU sophomore Ashlyn Kirby performs her floor routine during the Semifinals of the NCAA Gymnastics Super Six on Friday, April 20, 2018, in Saint Louis, Missouri at the Chaifetz Arena.

One summer afternoon, LSU gymnastics coach D-D Breaux asked then-LSU gymnast Ashlyn Kirby if she could speak with her after practice.

Kirby was confused and felt like she was being called in the principal's office in elementary school. Was she in trouble? She wasn't taking any summer classes, so she knew she didn't get a bad grade. Kirby wasn't sure what it could be.

She wasn't in trouble though. Instead, Breaux offered Kirby the opportunity to fill a managing and coaching role left vacant by former graduate assistant Ashleigh Gnat, who left LSU for a coaching position at Penn State.

"[D-D] said ‘I know you don’t have the love for the sport that you used to with injuries and everything, so how would you feel about coming in as a manager and being over with the girls on beam while I’m on floor and helping with daily things?’" Kirby said.

Kirby couldn't turn it down.

"I was just like, 'You know, honestly, that sounds amazing,'" Kirby said. "It wasn’t a hard choice for me. For me, it was like a huge sigh of relief."

Kirby was relieved that she would be able to come back and help out, as she struggled with injuries throughout her three years as a Tigers gymnast.

Kirby had  Tommy John surgery the summer before her freshman season, before a subsequent surgery to clean her elbow out during her sophomore year. The final straw was a torn meniscus suffered while practicing on beam during her junior year.

During her sophomore season, Kirby averaged 9.828 as the lead-off on floor, as well as posting a career high 9.925.

Though Kirby seemed on an upward trajectory, the injuries themselves were both mentally and physically exhausting. Sitting out for her junior season was a challenge that Kirby wasn't initially prepared for.

"Waking up on a competition day and knowing you wouldn't be able to compete was just a different feeling," Kirby said. She wasn't sure she could mentally handle being sidelined again in her senior season, which is why Breaux's proposal was much more pleasing to her.

“It was really difficult just because you also just see everybody else getting to do what they love and you’re in the training room, doing your therapy and rehab," Kirby said. "It’s just that you want to be out there so bad and be contributing in a gymnastics standpoint and you can’t."

Kirby, now in her final semester, said she's so thankful that Breaux allowed her fill a new role on the team and continue contributing in a different way, especially when her career didn't go as she expected and she wasn't able to continue putting routines on the floor.

Breaux said in this new role, Kirby is an extension of her on the floor, filling in when Breaux has to focus on watching both floor and balance beam.

LSU senior Ruby Harrold said that Kirby is "so important" to the team running smoothly on meet day.

"Kirby plants herself over there at balance beam and she's kind of like the policeman," Breaux said. "She watches the numbers and makes sure that the assignments being done, and she's just such a viable part of everything that we're doing right now as a class. Her contribution is as great as anybody else's on the team.

"She's been very mature and very stable and very consistent in what she's giving back to the team. More than a manager, she's really taking her position to heart."

Kirby said she knew it was time to finish her formal gymnastics career and she no longer wanted to put her body through the pain it was enduring every day, but it was tough to communicate that to her parents because of the dedication they had to the sport as a family for so long.

The transition from being a full-time gymnast to struggling with her injuries to filling this new role as a manager and pseudo-coach was a journey in and of itself for Kirby.

Giving up competing was hard. Kirby doesn't hide that. But she does think she fits into this new role much better than she would have just being on the sidelines in her senior year.

"She's excelled herself to step into that role that I'm not really sure she thought she could," Harrold said. "It's been cool to see her grow and develop and it's been a good transition for her because she's been able to still be part of the sport, but be in a different role."

Kirby thinks it was easier for her to make the decision, especially when Breaux initially came to her with the opportunity, because she was ready to be done with gymnastics.

If she held on longer and tried to finish her senior year on the floor, it would've been harder to let go.

But she was ready to be done with the sport that she's loved her entire life, and took it as a sign that maybe this — managing and coaching in her final season — was what she was meant to be doing.

It was a sign that she could provide "something greater" to the Tigers' latest quest for a national championship.

It wasn't what Kirby had initially planned for her collegiate career, but she is thankful for the journey no matter what. This was the best possible scenario for her and the team.

"I just took it as an opportunity to learn and to grow and that was something that I wanted to be sure that my senior year embodied," Kirby said. "I wanted to be present in where I was, not regretting the past or anything like that.

'It gives the community hope': Black gymnasts becoming more prevalent both at LSU, on national scale

"I just wanted to focus on the job that they had entrusted me with and do it to the best of my ability. I’ve always been a 100 percent kind of person. If I’m doing anything, I’m going to give it my all and so this was just as important to me as competing in meets."

More than anything, Kirby is happy to finish her journey with the people she started with — Harrold and fellow senior Kennedi Edney — on senior day this Friday, March 13. Kirby will be honored with the two All-Americans before LSU's meet against Arizona State.

Kirby said that she was never "quite the caliber" of Harrold, a Great Britain Olympian in 2016, or Edney, a Junior Olympic national champion, but she never felt like she was any less because of that.

The team always embraced her as part of the class of 2020 and especially this season as a manager for the Tigers.

“It’s awesome that I get to be here with them, honestly," Kirby said. "It’s different for me, but it’s special than I’m still here with them and we’re the class of three that we started out as. I’m happy that I got to do it along side them.

"They’re honestly the best people that I could’ve imagined going through this process with. They made the transition from gymnast to something else so easy. They never treated me any different. Like we’re more than just teammates, we best friends."