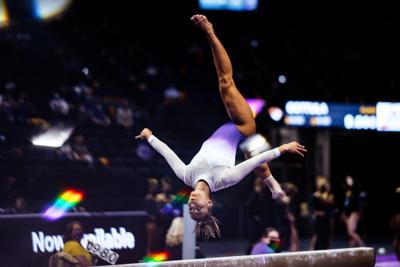 On Monday, NCAA gymnastics announced the 2021 gymnastics championships bracket. No. 3 LSU earned the top seed in the Salt Lake City Regional. The Tigers will compete in session two of the second round April 2-3 in the Maverik Center at the University of Utah.

“It has been a great year for us so far and we go into [the] postseason as a top-four team,” said Head Coach Jay Clark. "Any time you can be a one seed is a great thing from a perception and confidence standpoint. We are excited to continue training and compete for a spot at NCAA Championships.”

LSU’s first opponents will consist of Kentucky, Utah State, and the winner of the first round between Temple and Arizona. In their last battle on Feb. 26, LSU lost to Kentucky 196.800-197.100.

“We are really thankful to the SEC for the phenomenal job they have done to get us to this point given the circumstances surrounding this season,” Clark mentioned. “They have been proactive and we would not be here without their leadership.

If LSU advances to the Regional Finals, they will possibly face top teams such as Alabama, Oklahoma and Arkansas.

The meet will occur at 8 p.m. CT on April 2. Session one will be at 2 p.m. and feature Utah, Arizona State, Iowa and Ohio State. Both sessions will be streamed on ESPN3.com for fans at home.

Partly cloudy. A stray shower or thunderstorm is possible. Low 63F. Winds ESE at 5 to 10 mph.

Cloudy in the evening, then off and on rain showers after midnight. Low around 55F. Winds NE at 5 to 10 mph. Chance of rain 40%.