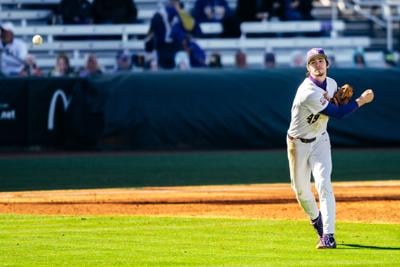 Two weeks before the start of his freshman season, Will Hellmers was approached by Head Coach Paul Mainieri about a possible position change. Concerned with the defense on the left side of the infield, Mainieri was willing to try anything to fix the issue, including moving someone he recruited as a pitcher to play in the infield.

He noticed Hellmers fielding ground balls that day at practice and asked him what position he played in high school when he wasn’t pitching. When Hellmers responded with third base, Mainieri thought he found the solution to his troubles.

Instead, Hellmers’ struggles at the hot corner were a dark cloud that dangled over a rough opening weekend. LSU split a two-game series with Air Force, and Hellmers totaled four errors and went hitless in six at-bats in the two games.

The night after the second game, Hellmers received a phone call. Unable to recognize the phone number, he answered cautiously.

“I got this Facetime audio call from a random number and thought, ‘I guess I’ll answer this and mess with this guy,’” Hellmers said. “I picked it up and he goes, ‘hey Will, this is Alex Bregman.’”

“Okay, I’m not going to mess with you,” Hellmers recalled thinking.

'They’re going to lead us to the promised land': LSU freshmen lead the way in wins over Nicholls, Southern

Bregman, a former two-time All-American shortstop at LSU turned World Series champion third baseman with the Houston Astros, keeps tabs on his alma mater. He frequently talks with Mainieri over the phone after games, going over things he liked, things he didn’t or sometimes simply wanting to gush over Dylan Crews.

After that Sunday’s loss against Air Force, Bregman asked Mainieri for Hellmers’ phone number, wanting to give the freshman words of encouragement after his shaky start to his college career. What followed was a 30-minute chat that Hellmers called, “the greatest conversation I’ve ever had with anybody.”

It wasn’t the debut Hellmers dreamed of, by any stretch. He never thought he’d be playing third base or in the lineup.

“I thought I was just going to pitch,” he said.

Of the 108 runs LSU batters have driven in this season, freshmen are responsible for 37 of t…

The debut he did dream of first took shape when he was just six years old. He and his family made the trip to Baton Rouge for a weekend series against Auburn. He couldn’t remember the exact score, but what he did remember was the feeling he had watching players. From that point forward, he knew he’d someday be in their shoes.

“It was the first time where I was really thinking hard that this is what I want to do,” he said. “I want to be at LSU doing what these guys are doing right now. That’s always been the driving thought in my head after that series.”

From an even younger age, LSU and baseball constantly surrounded him. He always had a baseball in his hand, whether ihewas playing with it himself or throwing it at people, and LSU was all anyone wanted to talk about in the Hellmers’ household.

“LSU’s always been a part of my life,” he said. “Whether it was baseball, football, basketball, LSU was always the talk going around my house. I’ve loved LSU since I was a kid.”

Mainieri ready to rely on freshmen: 'I'm not going to be afraid to use them'

If you were to describe the LSU baseball team in one word, it could be “inexperienced.”

Hellmers said he hadn’t played third base since his junior year at Jesuit High School in New Orleans, and even then it was rare. His junior year was when his number of innings on the mound took off. It’s also when LSU, the school Hellmers grew up dreaming of playing for, began to take notice of the arm that was blossoming right in its own backyard.

LSU’s recruiting coordinator, Nolan Cain, made the trips to New Orleans for the biannual matchups between Hellmers’ Jesuit and Brother Martin High School, one of the biggest rivalries in the area. Another future Tiger played at Brother Martin: Tre’ Morgan. Cain would go to the games between the two New Orleans powerhouses to see Morgan at first, but took notice to the opposing pitcher who often shut down the Morgan-led Brother Martin offense.

“Usually I’d be the one pitching,” Hellmers said of the matchups. “Nolan watched me pitching in those games, and I performed pretty well.”

“That was the one time I had to go up there and compete every time I stepped in the box,” Morgan said. “I knew every at-bat was going to be a battle against him.”

Hellmers knew he needed to be at his best in those battles, too.

“Those were always the hardest ones,” he said. “Tre’ has always been great competition for me, and I always looked forward to that. He always brought his best.”

“I don’t remember him ever getting a hit off me,” he said with a smile.

“We want you to pitch,” Hellmers recalled Cain telling him prior to the tournament.

In his future home and in front of his future coaches, Hellmers pitched well. Well enough to catch the attention — if he hadn’t already — of Cain and pitching coach Alan Dunn. After his showing, Cain called Hellmers into his office with Dunn.

“We want you,” Cain told Hellmers.

“So that was the unofficial offer at that point,” Hellmers said. “Things went on that summer, and I came on an unofficial visit, and I committed as soon as I got the official offer. My decision was made.”

Having not committed until the summer going into his senior year of high school, Hellmers’ path to LSU vastly differed from most of the other signees in the class. Hellmers calls himself a late bloomer in that sense.

“It happens differently for kids along the way,” Cain said.

After the first two games of the season, Hellmers was moved back to pitching full time. Looking back at the third base experiment, he says it made him a stronger person both physically and mentally as he prepared for the transition back to the mound.

“I’ll always remember that as something that made me a stronger person and a stronger player,” he said. “I was confident in it, but things happen. Life’s a dance. You learn as you go.”

He made his debut on the mound on Feb. 24, a Wednesday night game in Lafayette against ULL just three days after his last appearance at third base. He struck out two batters and didn’t allow a single hitter to reach base safely in two innings of work. He tossed another two innings the following weekend against Youngstown State. He got his first start the following Wednesday against Southern, striking out six and allowing just two hits in five innings.

Hellmers showed that he had not only overcome the mental hurdle of an unfortunate LSU debut but could pitch successfully out of the bullpen or as a starter. In his first four outings — three in relief and one start — Hellmers pitched a combined 9.2 innings with 11 strikeouts and allowed only two earned runs.

Next up on LSU’s schedule was the University of New Orleans, whose campus sat just 15 minutes from Hellmers’ high school. The game was on a Wednesday. Mainieri told Hellmers that he’d be the starting pitcher that Sunday.

“I was pumped for it,” Hellmers said. “To go back home and pitch against a team that recruited me in the past in my hometown, it was a great feeling to be out there.”

Hellmers had plenty of family and old friends at the game to watch him pitch. He could hear close friends from his high school days yelling at him from the crowd.

“There were a lot of people there that were rooting for me,” he said. “It was great to be back. It was a little bit more special. I felt it more in my heart.”

He pitched five scoreless innings and added seven strikeouts that night, the town where he grew up with a baseball always in his hand, surrounded by LSU superfans.

With another successful outing and many more since then, Hellmers proved he belonged on that field that he said he would play on one day when he was six. More importantly, he reached his dream by overcoming the initial adversity of a debut unlike any other. He always imagined his first time taking the field as a Tiger would be on the mound, not at third base or in the batter’s box, but he wouldn’t go back and change it if he could.

Still, he came out on the other side. He worked through his failures. He kept his head up and kept working to get where he always knew he’d be. Just like Bregman told him to do.

“Baseball is a humbling sport,” Hellmers said. “You have to fail to succeed. That’s always got to be in the back of your head. You have to grind through it to succeed.”