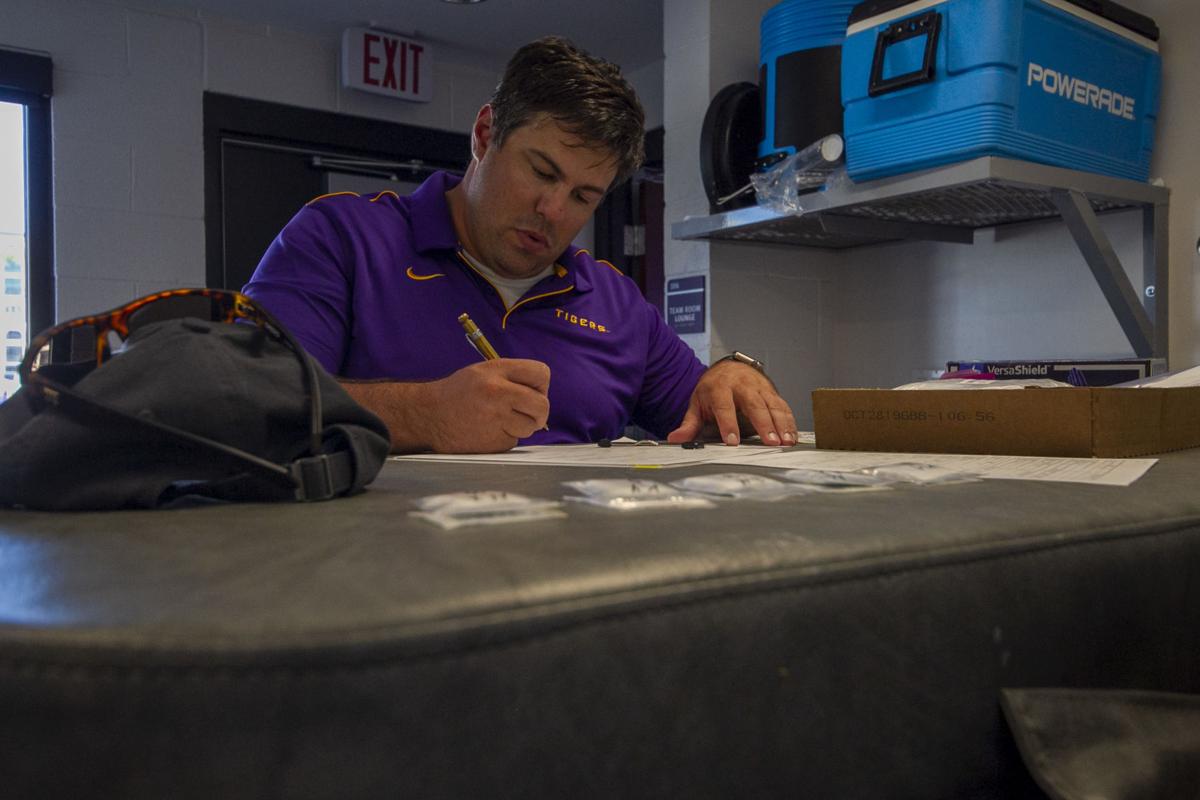 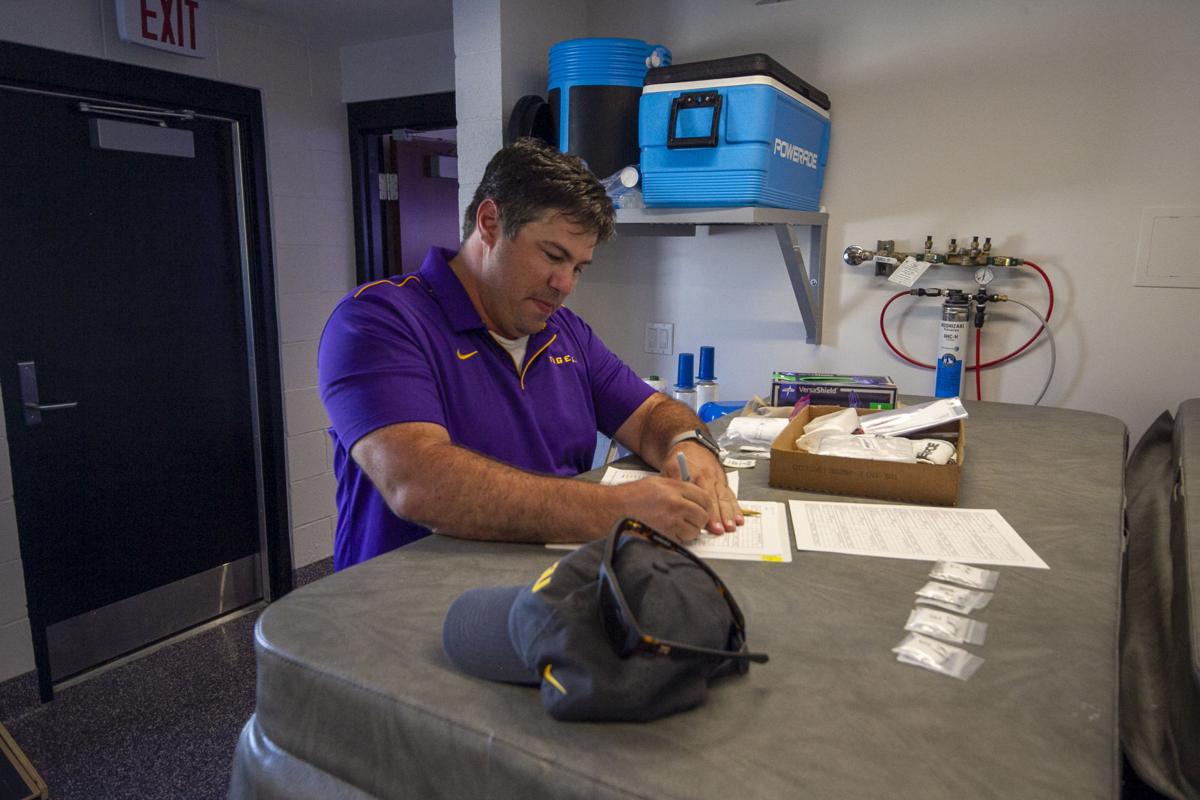 LSU sophomore wide receiver Ja’Marr Chase leads the nation in receiving touchdowns, average receiving yards per game and is a finalist for the Fred Biletnikoff Award, an award given to the best receiver in college football each year.

His 17 touchdown catches are a LSU record and his 1,457 receiving yards are approaching Josh Reed’s record of 1,740, which also the Southeastern Conference record. Junior wide receiver Justin Jefferson isn’t far behind Chase either.

Jefferson has 1,092 yards and 13 touchdowns on 81 catches, which is just shy of Reed’s school-record 94 catches. With at least two games left, it seems likely Chase and Jefferson will continue to rewrite not only LSU’s record book but also the SEC’s.

It helps to have a Heisman-caliber quarterback in senior Joe Burrow, and the two wide receivers are extremely talented in their own right.

It’s why LSU’s director of athletic training Jack Marucci gives credit to players and coaches when asked about his study on ocular dominance to improve the wide receivers’ play this season.

The program, led by Marucci and sports science research associate Nathan Lemoine, has officially been in commission for about five years. They’ve done studies on athletes’ sweat composition, biologics and the usage of stem cells instead of cortisone to treat inflammation and have had breakthroughs on ACL surgeries.

Today it’s far from where Marucci began in the early stages of the program.

He opens a desk drawer and pulls out a device that looks like it should be attached to the bottom of a villain’s car in a spy movie.

But instead of tracking a villain’s location, the device was placed in LSU football players’ helmets during practices and games with the intent of tracking g-force exerted by players, and the amount hits to the head players were taking.

“They were taking more blows in a day [of practice] than they were in a game,” said Marucci, who along with his staff, provided crucial data to help end two-a-day practices in college football following the 2016 season. “So why would you have back-to-back practices and back-to-back practices? It doesn’t make sense. We don’t do that in the season after we play a game.”

The study, done with the original helmet sensors in 2013 and 2014, is one of the forbearers of what became the Applied Sciences Program, which works with multiple teams on campus.

'They love Joe, and Joe loves them': Joe Burrow walks off field at Tiger Stadium for final time

Everything done in the program is based on functionality and practicality. However, Marucci, who has been at LSU since 1996, and his staff don’t just focus on off the field research to benefit players’ health. This past summer, Marucci broke down each pass from the 2018 season and created what he calls the receiver matrix.

The idea for the matrix came from the way baseball hitters tracked pitches.

“We started very elementary, and it’s funny because we gave questionnaires on the route tree,” Marucci said. “It was very archaic, but you know what, it gave us something to start with. A lot of times just talk to your players. People don’t talk to the players enough.”

The matrix does a lot. It breaks down which routes LSU’s wide receivers ran, the direction those of routes, if there was motion or no motion before the play, where the wide receivers lined up and the corresponding coverage, and of course, whether the ball was caught or dropped. From there, Marucci looked at how the wide receivers’ heads were turning and what position their hands were in when trying to catch the ball.

The results for each wide receiver were then placed on a route tree and broken down into success rate.

Marucci found a profound correlation with LSU’s players. Some guys were better in the slot than the outside, and others did better when their routes flowed to the left side of the field.

To confirm the results from the 2018 season, Marucci needed to be able to see each player’s eyes. So he partnered with former Florida volleyball assistant coach Mike Mann, who now runs his own visual tracking company, to develop a special pair of glasses.

The glasses allowed Marucci and athletic trainer Gabby Arancio to see how each player’s pupils dilated and tracked the football. Over the summer Marucci, Arancio and the wide receivers got together and put the glasses to use.

“When Jack crunched all the numbers, it was pretty much all spot on,” Arancio said. “All the information we got from them and where they preferred to be lined up directly with their catches and drops.”

The results were given over to LSU coach Ed Orgeron and his offensive staff. Orgeron called the information “invaluable” and said passing game coordinator Joe Brady has leaned on the information provided.

“The detail in which Jack went into it and that it was telling and true about every player,” Orgeron said. “He kind of nailed each player, and everybody has their strengths and weakness, and I never looked at it like that, but he found a way to do it.”

Chase noticed occasionally when the testing results are used in LSU’s offense. Chase has lined up predominately as the boundary wide receiver, while Jefferson has played the slot and sophomore Terrace Marshall is used more on the wide side of the field.

The results of LSU’s offense and its wide receiver trio’s play have spoken for itself.

Through the regular season, Chase, Jefferson and Marshall have combined for 183 catches, 3,005 yards and 38 touchdowns. The numbers are even more astonishing when accounting for Chase’s missed game against Northwestern State and Marshall’s absence in early October with a broken foot.

“Yeah, we’ve helped in some areas, but if you don’t have the horses, you can implement all this stuff forever,” Marucci said. “But that doesn’t mean you’re going to win a national championship.”

The applied sciences staff’s research didn’t end with just the wide receivers this summer either. They worked with the defensive players to gauge their reaction time.

The staff created a test mimicking a pass rush drill to see how quick players were able to reach the target. Each player lined up on the left and right side of the target and acted as if they were rushing a quarterback.

While Chase said the wide receivers’ focuses were more individual and not dropping the ball, the reaction-time testing for the defensive players became an all-out competition between junior safety JaCoby Stevens and junior linebacker Patrick Queen.

Queen said the two compete over everything, even seeing who can eat the fastest. After Stevens was done with the drill, he went into the weight room letting everyone know how he did.

Once Queen left the weight room, his sole focus was to beat Stevens’ time. The problem was only the athletic trainers knew Stevens’ time, and they refused to tell Queen, who estimates he tried to best Stevens’ time for over 30 minutes.

Arancio said not only were the players deeply involved and engaged in the testing, so too where the coaches. She had a meeting with Orgeron to break down the numbers, and the pair went over every single player’s results.

“It was a fun experience. Just to figure out ways to maximize your talent, and figure out where you need to go,” said Stevens, who leads LSU with five sacks. “That’s all Jack Marucci wanted to do. He wanted to figure out where your pass rushers are more efficient from, which side and what position. When we did that we figured it out, and now [Defensive Coordinator Dave] Aranda can take that information and put his pass rushers in a good place to get to the ball.”

Stevens said while he hasn’t broken down the film himself, he’s pretty sure the results from Marucci’s testing would be apparent. Certain guys are better rushing from the right and are usually always lined up on the right side of LSU’s defense, while some players may blitz from certain areas their times showed they were best at.

For Marucci, this is what analytics is all about. Numbers and data that take into account each individual player’s strengths and try to maximize their talent. If the information gained can’t be applied, what’s the use?

The next goal for the applied sciences staff is to find a way to measure periphery and how well players react to the space around them. He also plans to continue work with the wide receivers and reaction times, and the staff has added an automated JUGS machine. The machine developed by Monarc allows coaches and players to digitally input routes, and the machine will place the ball in the exact location desired.

“This is stuff we continue to learn,” Marucci said. “We don’t have all the answers, but that’s why this has been fun because it’s been continuation every year or every month. We kind of learn something new that we didn’t think about and now it really clears the pictures up.”

Zach Von Rosenberg ran out on the football field to celebrate LSU’s 36-16 win last year over No. 2 Georgia and shake hands with some of his te…