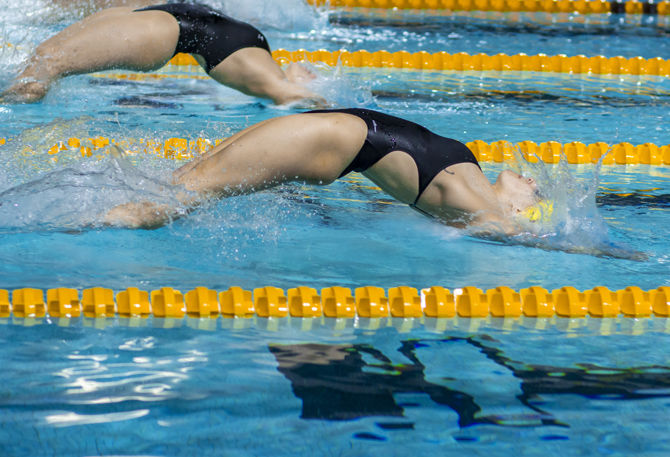 LSU sophomore Ellie Baldwin swims the 200-yard backstroke event during the Tigers' victory in the LSU Natatorium, on Saturday, Jan. 12, 2019. 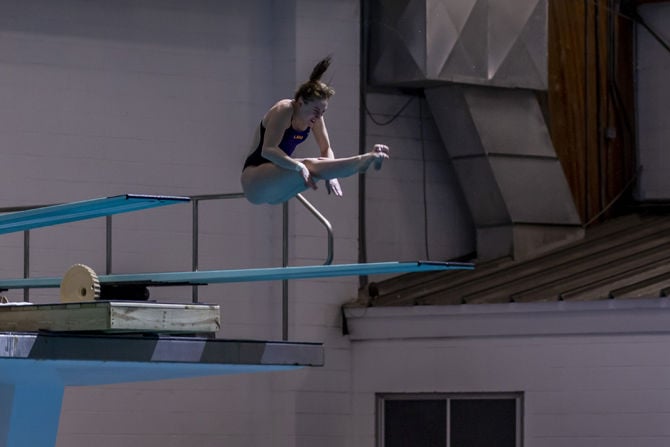 LSU freshman Aimee Wilson performs a dive during the Tigers victory in the LSU Natatorium, on Saturday, Jan. 12, 2019. 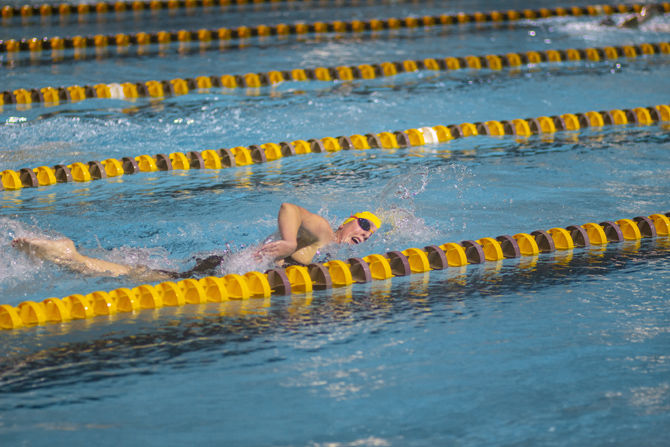 LSU sophomore Lexi Daniels swims the 1650-yard freestyle event during the Tigers victory in the LSU Natatorium, on Saturday, Jan. 12, 2019.

LSU sophomore Ellie Baldwin swims the 200-yard backstroke event during the Tigers' victory in the LSU Natatorium, on Saturday, Jan. 12, 2019.

LSU freshman Aimee Wilson performs a dive during the Tigers victory in the LSU Natatorium, on Saturday, Jan. 12, 2019.

LSU sophomore Lexi Daniels swims the 1650-yard freestyle event during the Tigers victory in the LSU Natatorium, on Saturday, Jan. 12, 2019.

From bouncing and spinning to sprinting and panting. There are many differences in the sports of swimming and diving.

The LSU swim and dive team is split into thirds. There are divers, sprint swimmers and distance swimmers.

The differences between swimmers and divers are like night and day. The only similarity between the sports is the fact that they both involve a pool.

One of the most notable differences is the height. Swimmers are typically very tall, to cover as much distance as they can per stroke. Divers are shorter so they can create small positions in the air to increase rotation and create minimal splash upon entry.

“I would say the main difference is the mentality during competition,” junior Dakota Hurbis said. “With diving it’s often better to come into a competition more calm and relaxed so you’re able to apply extra focus and emphasis on some of the small details of your dives. Whereas, swimming, you have more of an opportunity to get as pumped up as you can and just race as hard as possible.”

Divers and swimmers practice at different times and have different training regimens. Divers train on the land with a series of exercises and skill based work just as much as they do in the water. Swimmers train both on land and in water, but the majority of their workouts are in the water, working on stroke technique and speed.

“I believe divers are in better shape physically and mentally,” said senior Lexi Daniels. “You really have to have your mind right when you are about to jump off the 10 meter.”

Less obvious to non-swimmers are the differences between sprinters and distance swimmers.

There are almost just as many differences between sprinters and distance swimmers as there are between divers and swimmers.

Sprinters and distance swimmers are separated into groups during practices.

The sprinters focus on power and use tools such as power racks, buckets, shoots and socks to optimize speed in a short period. Their main goal is to swim as fast as they can from the outset. They also tend to breathe less during their races, especially shorter races such as the 50 freestyle, where there are no breaths at all.

“I think we don’t choose who we want to be,” sophomore Katarina Milutinovich said. “As a child, I tried to swim different distances to see what I am capable of. And eventually, I realized that I am better at short distances, because I can develop the speed but my endurance doesn’t allow me to hold it at longer distances.”

The distance swimmers focus on tactics and precision over a long period. Their goal is to, like a sprinter, complete the race as fast as possible. However, with longer races, sprinting from the outset does not produce fast times. It causes tired swimmers who end up slowing down.

Coaches work with their respective athletes to determine what works best for them and play to their individual strengths across sprint, distance and diving.

“One of my strengths is persistence because I have to be able to keep going even if I am tired,” Daniels said. “I need to power through.”

LSU’s diving head coach Doug Shaffer will have spent 18 years coaching for the Tigers this year.