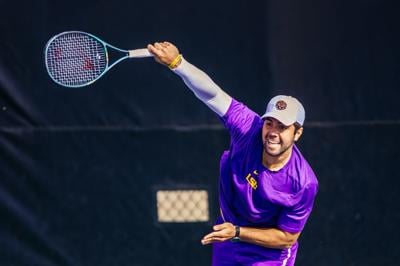 Last spring, the LSU tennis team found a powerful dynamic between senior Rafael Wagner and sophomore Ronald Hohmann. Hohmann made his debut at LSU when playing doubles with Wagner back in January, conquering Ole Miss 6-1.

The duo appears to have strengthened their bond this fall. During the Olivier Borsos Invitationals, Wagner and Hohmann dominated the court, defeating Texas A&M in a tiebreak of 9-8 (2) and MSU (8-5) within two days. The pair claimed the doubles crown on Sunday with a defeat over its LSU counterpart, Nick Watson and Boris Kozlov.

“It’s good to end the tournament on a strong note,” Co-head Coach Chris Brandi told lsusports.net. “This was a tough event. Texas A&M and Mississippi State have been two of the best teams in the country for a while.”

The potential of these two players and the performance they showed during the invitationals in Baton Rouge reveal great promise for LSU’s performance in doubles later this year.

Both players have had an impressive career during their time at LSU and prior to their collegiate careers. Wagner produced a 19-12 singles record in his sophomore year and last season defeated No. 1 duo Constant de la Basse and Gabriel Nemeth from Penn State with his partner Joey Thomas. Hohmann showed great promise before coming to LSU, being listed as a five-star recruit and ranked the No. 1 player in the country by tennisrecruiting.net.

The Tigers have already found success in duos this fall, thanks to the development from last season. Wagner and Hohmann’s win marks the second-straight fall that LSU has had a doubles champion in a tournament. Whether the team can build upon the potential and success it already possess within the next few months will determine how far it goes this season.