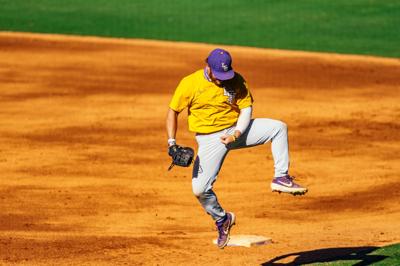 The grins and laughter of jovial baseball junkies filled Alex Box Stadium Wednesday afternoon. For the LSU baseball team, the return to their home stadium was a taste of normal after having their routine ripped away in March amidst the rise of COVID-19.

Freshman Will Safford was so excited that he stuck a back flip after warmups and was greeted with raucous cheers and whoops. Cade Beloso enthusiastically took some tough pop flies at first base in the glaring beams of the afternoon sun to the tune of “BELI-BELI-BELI” chants from the dugout. Most importantly, Beloso, Drew Bianco and Trent Vietmeier got to show off their impressive beards in person.

LSU officially opened fall practice with a series of batting practice, baserunning drills and fielding exercises. Head coach Paul Mainieri had wanted to work on fundamentals specifically after players had done individual work with coaches before official practice opened. This was the first time the team had all been together on the field since their last game on March 11 against South Alabama.

Mainieri and his team were playing their way through a midweek game when LSU athletic director Scott Woodward visited Mainieri in the dugout to alert him that LSU’s upcoming SEC series in Oxford against Ole Miss would not permit fans to attend. Just two days later, the NCAA cancelled all spring sports and their championships.

“Who could have imagined on March 11 we’d be in this situation?” Mainieri posed. “It’s just been like a bad dream that everybody hopes they’ll wake up from.”

While the nightmare continues across the world, it is hard for the team to not feel like they are starting to awaken. After all, there is certainly a lot to be excited about.

LSU returns a serious amount of experience and talent from previous teams, due to the NCAA granting an extra year of eligibility for all spring sport athletes affected by COVID-19. They also bring in the No. 2 recruiting class in the country according to Baseball America, and two LSU freshmen, outfielder Dylan Crews and right hander Ty Floyd, land on their top 10 incoming freshmen list.

LSU’s weekend rotation sees two of its three starters come back in Landon Marceaux and AJ Labas, and although Friday night ace Cole Henry was drafted and signed with the Washington Nationals, his role is being ably filled by electric junior Jaden Hill. Hill has been named to Baseball America’s Top-100 College Prospects List for the 2021 season.

“This guy is a tremendous athlete,” Mainieri said of Hill. “When I talk about the best athletes I’ve ever coached, I talk about Jeff Samardzija back at Notre Dame, I talk about Chad Jones here at LSU. You could put Jaden Hill in that same category. This guy is 6’4”, 225 pounds, chiseled, just a chiseled body, throws the ball extremely hard. If we had him hit, he’d probably be hitting a bunch of home runs.”

Behind the vaunted rotation is an equally formidable bullpen. Returnees include right-handed 2020 All American Devin Fontenot, as well as right handers Ma’Khail Hilliard, Matthew Beck, Aaron George, Vietmeier and Nick Storz. Left hander Brandon Kaminer is the Tigers’ most experienced lefty specialist and is also accompanied by Jacob Hasty. Add several competent freshman arms to develop throughout the year, most notably Floyd, and the stacked pitching staff will be the Tigers’ strength this upcoming season.

“I watched Devin Fontenot throw a bullpen the other day, and he looked like a major league pitcher,” Mainieri stated. “It was the best bullpen I’ve ever seen him throw. His slider looks so much better. His command was impeccable. He was throwing 94 miles per hour.”

LSU is counting on multiple players to be leaders this year. Mainieri expects a team effort to hold everyone accountable and be vocal with their leadership, but two position players that have emerged with their leadership last year are LSU’s duo of Zachary High stars, infielder Collier Cranford and catcher Alex Milazzo.

“I just think the world of Milazzo,” Mainieri said of his undisputed starting catcher. “If I could build a catcher, in the mold of a guy that I would like to see, Alex Milazzo would be that guy. He’ll fight you to the death. He’s just going to do whatever it takes to will his team to victory.”

The Tigers’ lineup only returns five players who have ever played a full college baseball season: Beloso, Bianco, Gavin Dugas, Giovanni DiGiacomo and Braden Doughty. Behind them, a strong lineup of young talented bats awaits, finally getting their opportunity to prove themselves. Expect returning sophomores like Milazzo, Cranford, and Cade Doughty to be key contributors, as well as incoming freshmen headlined by Crews and Drost to get involved quickly, giving the pitching the run support they need.

Mainieri mentioned the biggest question mark for the team is the left side of the infield. The Tigers have a lot of options, but no decisions have been made as to who will start at shortstop or third base. Cranford built a lot of credit with his tremendous defense and sound hitting last season, but he has been challenged by a healthy, stronger Zach Arnold and newcomers Safford and Jordan Thompson. Cranford and Thompson took reps in batting practice at third and shortstop respectively at first, but the positions are up for grabs.

The team is completely healthy other than catcher Hayden Travinski, who had a procedure on his knee. No players are in quarantine or have had any COVID-19 complications. Maurice Hampton Jr. and Storz have been absent from camp as they are currently in the middle of football and will rejoin the team when their season is completed.

The team had originally planned to start practice on September 20th, but a COVID-19 exposure caused nearly 30 of the team’s 40-man roster to be quarantined. The Tigers had their first scrimmage of seven innings Thursday, with Hill and Marceaux starting for each team. Each threw two scoreless innings and then gave way to the remaining staff members. Drost and DiGiacomo led the offenses with a home run each.

LSU will conclude fall practice on November 10, barring any setbacks. Based on any indicators Wednesday, that will be way too soon for the players to be ready to quit. The wait until February is going to be even longer than usual.